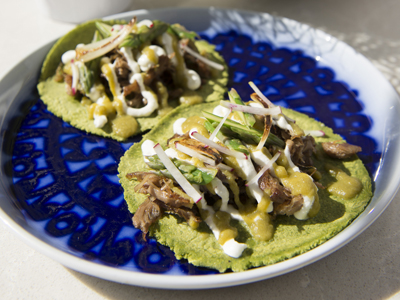 Michael Hay appears from the kitchen clutching a fist full of fresh ramps.

My photographer leans in and quietly tells me, “I asked him if he wanted a prop in the photo; something to have in his hands from the kitchen.”

Many chefs, when asked this fairly common photo propping question, return from the kitchen with their biggest blade, wooden spoons, or often reach for the establishment's finest bottle of wine.

Chef Hay emerges from the kitchen all broad smiles, proudly presenting what inspired him most from the morning's marketing.

“There were fresh ramps today, so we had to make ramp tortilla shells this morning,” he says.

Chef Hay has been tasked with leading the kitchen at the newest Oliver & Bonacini restaurant: Beaumont Kitchen. Recently opened inside of CF Sherway Gardens, the restaurant has the added cache of being tucked inside the also newly opened, and highly anticipated Sak's Fifth Avenue.

The restaurant is part dining room, part lounge with soft sofas urging you to settle in for the evening with one of Beaumont Kitchens signature cocktails. Soft neutrals and natural textures blend for a contemporary look that is all about being relaxed and enjoying the menu, all while looking out over the luxe surroundings that define Saks.

Hay has been with Oliver & Bonacini for a few years now, and has the role of District Chef, overseeing the kitchens at both Beaumont Kitchen and Oakville's O&B Grill. Working alongside Hay at Beamont, is Chef de Cuisine Paul Senecal, whose resume includes experience working in Paris at the Michelin-starred Passiflore under renowned Chef Roland Durand; time perfecting his skills at Luma and Jump; and a stint as senior sous chef at Biff's Bistro, working under Chef Amanda Ray.

“The menu here is about what is fresh, local, in season but also about what leaves you feeling good when you eat it. We have our indulgences ““ Peanut Butter Stuffed French Toast is on there ““ but a lot of the dishes are about being fresh and healthy, and not too heavy, especially at lunch,” says Hay.

The heart of the menu is eclectic west coast cuisine following a food philosophy that respects ingredients and showcases them in ways that are close to their original form including Crudités Salad with buttermilk dressing and fine herbs; Thai Root Vegetable Salad with cashew butter, lime & chili dressing and cilantro; and Cauliflower Thin Crust Pizza with fior di latte, oregano and walnuts.

Dishes appear from the kitchen vibrant with colour, challenging even the staunchest carnivore to dig into the seasonal spring veg. The Thai Root Vegetable Salad is a riot of colour, vegetables brought into submission by a spiralizer before being dressed with Thai-inspired dressing.

“I have a background heavy in molecular gastronomy and spent a lot of time trying to blow people's minds with how food looks. Then one day I realized I was just garnishing plates. This menu is about the food. What is fresh, what tastes amazing and what makes you feel good,” Hay says.

Chef Hay began his career in his hometown of Kingston then moved to Ottawa to study English and Humanities at Carleton University.  When he decided to pursue his passion for food full-time, he honed his skills in various restaurants in Ottawa, working alongside prominent chefs such as Marc Lepine and Rene Rodriguez. Hay moved to Chicago to gain experience with molecular gastronomy at Michelin-starred Moto Restaurant.

“This menu features lots of vegetables, but also things you want occasionally because they just taste good. The polenta fries are simple, but just so good, and I had to have zucchini fries. It's the kind of food you want to share with friends.”

Beaumont Kitchen is one of Oliver & Bonacini's two unique restaurant concepts in partnership with Saks Fifth Avenue. The company will open a multi-level restaurant and bar in the CF Eaton Centre store later this year.