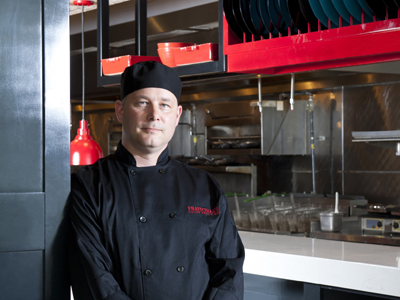 “It's hard to stick to your knitting,” says Fraticelli's president Nikki Lishman, after a slice of thin crust Calibrese pizza, “but we've never altered our mantra: “˜use the best products'.”

It is a proven formula, Lishman explains to WEST over a shared entrée in the nine-month-old restaurant: It all started when Lishman and her husband, Jim, opened the first Turtle Jacks 22 years ago. The family-run restaurant built its name on chicken wings and potato skins and gradually began to expand its ranks. Today, Ontario is home to more than 20 Turtle Jacks locations, the majority of which dot the GTA.

Fratacelli's Italian Bar and Grill looks to draw visitors in the door with the same recipe for success, but with Italian ingredients. The restaurant offers staples like pasta and oven-baked pizza, “The goal is authentic Italian cuisine,” says Executive Chef Bret Turnbull, “we mainstream it a little bit but it's pretty grassroots stuff.”

The restaurant, located at 1860 Appleby Line just south of Upper Middle Road ““ steps away from a Turtle Jacks location, looks to impress guests with a wide assortment of dishes: Hand-made spaghetti carbonara with double smoked bacon, sautéed onion, cream, egg, and parmesan cheese for $15.75 and even grilled items like a 10oz New York strip steak brushed with herb butter, seasoned with truffle oil and served with rosemary-roasted potatoes, red onions and dried figs for $29.50. It also offers a lunch menu and a cocktail menu that can be ordered by the glass or the pitcher.

Drawn from its extensive wine cellar, Fraticelli's also offers an extensive wine list pourable by the glass or bottle. Located in the front foyer, the floor-to-ceiling glass rectangle is horizontally stacked with 16 rows of bottles on the front and back, each row large enough to hold 20 bottles ““ enough wine to make a Sommelier salivate.

From there guests can also choose where they would like to sit: head right into the formal dining room, left into an open-concept dining space with booths, or veer left to the vast, 67-person patio with a variety of couches, chairs and dining tables. Wherever guests end up, a shield of privacy glass and bright yellow umbrellas minimizes wandering eyes and toasted thighs.

A skyward glance on the patio will also reveal one of Lishman's favourite design touches ““ a simple wooden awning constructed from 100-year-old pieces of lumber foraged from a church in Hamilton.

Aside from tabletops and chair legs, it is the only wood to be seen inside or out.

Inside, blacks and grays splash the walls and ceilings while reds, yellows and even turquoises accent the booths, tables and accessories.

In order to make the booking process as convenient as possible, potential visitors can book their own reservations on the company's website ““ once guests enter the time of their visit and the number of guests, a list of open tables is revealed. And those looking to grab a quick bite will be pleased to know any menu item is also available for pick-up.

With the establishment of the first Fraticelli's in Richmond Hill three years ago and the second location now open in Burlington, the two restaurant chains are run under the Tortoise Group umbrella.

There is no limit to Fraticelli's success says Lishman. But, just like Turtle Jacks, she says the brand must be built gradually, based on quality ingredients: call it, “slow and steady.”