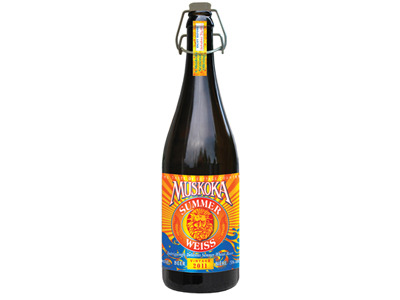 Make this summer one to discover some of the amazingly delicious new brews from the growing number of Ontario Craft Breweries.

Kick up the flavour and discover some of Ontario's more unique craft beers.

What could be better than lazin' on the back porch with a frosty beer on a hot sweltering summer afternoon? How about a brewmaster's dinner where some Ontario craft brews are served with some fairly sophisticated food pairings?

It was an event to launch the new Niagara College Teaching Brewery located at the Niagara-on-the-Lake Campus, Canada's first and only teaching brewery. The Brewery serves as a practical learning environment for students in Niagara College's Brewmaster and Brewery Operations Management program.

The dinner was prepared by the Canadian Culinary Institute at Niagara College and began with Niagara College Teaching Brewery's Educator Dopple Bock (niagaracollege.ca/brew). Crafted by brewmaster John Downing, the Dopple Bock is a lightweight beer with a sweet malt essence and seven per cent alcohol that hardly shows. It was paired with a Quebec foie gras appetizer. Diners heaped foie gras on a slice of spent grains brioche and smeared some bok jelly overtop. Each mouthful was washed down with Educator Dopple Bock. The smoothness of the ale supported the unmistakable luxurious texture of the foie gras while the earthy flavours balanced it well. You can buy Educator Dopple Bock at the college by the refillable growler for $15.

Next was the Erie Whitefish “Waterzui” with Hothouse Peppers, Yukon Gold Potatoes and Sweet Shallots in an aromatic coriander citrus beer broth that was paired with Muskoka Summer Weiss (muskokabrewery.com). The beer is unfiltered, unpasteurized and naturally hazy by design, with a beautiful balance of wheat, barley and subtle hopping. A very strong albeit feminine pairing with flavours of the coriander and citrus being echoed in the beer ““ yum.

Muskoka Cottage Brewery is owned by brewmaster Gary McMullen and headquartered in Bracebridge making Muskoka Summer Weiss a favourite cottage brew, and one of the best drinks you'll have with lake fish. The sweet essence of fresh fish caught and eaten on the same day are nicely balanced by the beers slight earthiness.

Next came the wort sorbet, meant as a palate cleanser but with strong flavours it brilliantly showed what can be done with some of the sweet malty beer ingredients. I think any beer sorbet is a great way to go this summer.

Next beer was the Neustadt 10W30 Brown Ale produced from the Neustadt Brewery (muskokabrewery.com) in Neustadt, Ontario. Far from being a German brewery, Neustadt is owned by an Englishman, Andrew Simpson and the brewery is located in Neustadt ““ hence its name. This is Ontario oldest winery building and was once home to Crystal Springs Brewery. The spring water for the beer comes from the natural spring water that actually flows right into their brewery. The 10W30 is a Northern English mild (style) classic brown ale that sells for $2.70 per 473 mL can.

The delicious dark ale was paired with the main dish of the evening; medium rare roasted Black Angus tenderloin surrounded with a succulent barley root vegetable stew and drizzled with roasted garlic lemon hollandaise. A yummy gourmet rendition of the classic English brown ale and beef.

The “OMG” good, dessert beer was over the top deep brown and chocolatey Grand River Russian Gun Imperial Stout by Grand River Brewery (grandriverbrewing.com). It was paired with an overwhelmingly bold Dark Prinz Espresso Torte and a dollop of Laurel Cream flavoured with bay leaves. The Torte was too heavy and serious to give much pleasure. It may have worked with the stout in theory, but two big flavours fighting each other for my attention was not my idea of a great flavour experience. I think I would have preferred a more subtle double chocolate soufflé so the flavours would compliment the beer but would yield to the texture and body leaving me with lingering chocolate, caramel, coffee notes that played well together.

The Grand River Russian Gun Imperial Stout weighs in at about nine per cent alcohol, which is huge for a company that prides themselves in crafting full flavoured beers with alcohol contents of less then five per cent for today's concerned drinkers.

Make this summer one to discover some of the amazingly delicious new brews from the growing number of Ontario Craft Breweries.

-Lynn Ogryzlo is a food and wine writer and author of Niagara Cooks, a farm to table, and international award winning cookbook. You can reach Lynn for questions or comments at niagaracooks.ca.