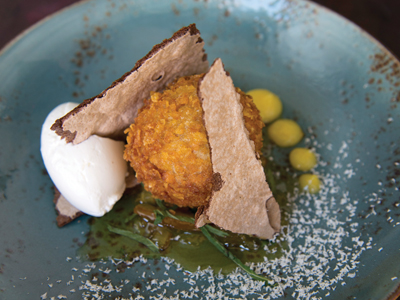 With success and critical acclaim in their apron pockets from Twisted Lemon Restaurant in Cayuga, owners Dan Megna and Laurie Lilliman have just launched a second venture in the fast-changing foodie scene of Hamilton.

Lake Road Restaurant opened a few weeks ago on vibrant James Street North, surrounded by a streetscape of galleries, coffee houses, boutiques, and several of the city's newest dining establishments.

The Twisted Lemon opened under the watchful eyes of the television viewing public as part of The Food Network Canada's series The Opener. That was almost seven years ago, and Chef Megna is proud to have had the chance to nurture a team at the Twisted Lemon that has remained with him from the beginning. Something almost unheard of in the hospitality industry. “We've been open here at Lake Road just a few weeks, and already this crew is like a family too.”

“We are thrilled to be opening a restaurant in Hamilton at this exciting time in the city,” explains Megna. “The Twisted Lemon will remain a fine-dining destination location and continue to draw guests from across southern Ontario ““ Niagara, the Greater Golden Horseshoe, Toronto, Brantford, London etc. ““ Lake Road, being in such an accessible location and open seven days a week, as well as featuring live music and art, will become a “˜local' spot for everyone from Toronto on west, and our many industry friends.””¨”¨

Lake Road has been designed to be a warm and welcoming space; dark woods, reclaimed timber, and fixtures with exposed Edision lightbulbs. As you enter the bar, custom shelving stacked in wait to prepare any guest's request. In the back corner of the main dining area, a stone oven turning out fresh pizza with a fine, thin crust with good snap.

A separate dining room in the front of the restaurant can be opened up to the street in good weather, or used for private events. In the back an ample kitchen Megna was pleased to find when they first saw the space, where the chef and his crew are making everything they possibly can in house, from scratch. Downstairs, in a separate prep kitchen, pastry chef Jodi Tamminga is turning out all of Lake Road's breads, pastry and desserts from scratch too.

Chef Megna brings plates from the kitchen clearly prepared with thoughtfulness and attention to detail. He describes them with pride, with a story, with glee.

“With food, I get to do whatever I want each day. I haven't worked in years,” he says.

The menu at Lake Road is designed to be “redefined dining” as Megna puts it. He wants every dish to be prepared with the care and complexity of flavours that you would expect from a fine dining restaurant, but the menu should speak to any diner, and feel in place the restaurant's community.

Lilliman's enthusiasm, too is contagious as she talks about Lake Road.”¨”Lake Road will offer our guests the experience to enjoy some of the best Hamilton has to offer, paying particular homage to James Street North's vibrant history and current evolution,” she explains. “Local art, music, diverse cuisine and most importantly the community of people, will be celebrated in a relaxed yet energetic atmosphere designed to induce conversation and creativity.”

Under Executive Chef Dan Megna, Chef Luke Petruzzella will head up the kitchen at Lake Road, having spent the last year at the Twisted Lemon following stints at the Ancaster Mill, Ravine Vineyards, Oban Inn and Rousseau House.”¨Petruzzella and his team will bring the old-world flavours of the Mediterranean to Lake Road with a new-world take ““ paying homage to the history of the neighbourhood through taste ““ while live music, original art, fine wine, craft beer and custom cocktails will complete the guest experience.”¨”¨

Behind the bar Lilliman is concocting those deliciously creative cocktails, based on the same principles that make a great dish.  The menu boasts a long list of proper cocktails, all made with great care, complemented by a seasonal list that will change often.

“When I create a cocktail I am thinking about all of the same things Dan thinks about in the kitchen. How will it look, how will it smell, and then how will it taste? All of the same senses that you appreciate a great dish with”¦it's the same with a good drink.”