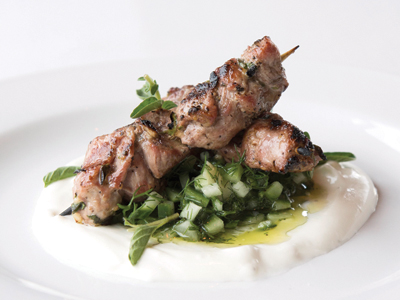 “We make the best martinis in Burlington,” is one of the first things Barry Michael, owner of MAX Resto Lounge, says to me when I visit his sparkling new 70-seat upscale restaurant in North Burlington.

Well, how can you say no?

The premium potato vodka is kept chilled ““ no ice cubes necessary ““ so the first sip is as potent as the last. Whether it's the best in town will require further research, but it's definitely good and indicative of the kind of attention to detail and quality Michael embraces in his newest venture after a well-earned hiatus from running well-known establishments such as Latitude and Restaurant 1505 in the region.

Twenty-five years in the restaurant business hasn't deterred Michael, nor has he compromised his vision. This time around, it's all about the world ““ a global-inspired menu with emphasis on keeping the kitchen busy. Desserts are made in-house, “which puts us a bar above everyone else,” Michael says.  A freshly made breadbasket is served with each meal and the type of bread changes regularly.

Michael emphasizes excellent price points, making a hardly worthy comparison to chain restaurants and roadhouses. “You'll spend almost the same amount there,” he says, “but won't get the same value or service.”

“I say that humbly,” the confident but soft-spoken Michael says. “A customer told me, “˜You'd have to go to Paris to get this kind of experience anywhere else.'”

First, it changes monthly adding completely new items, updating a few popular ones with the season. For instance, grilled meats in the summer replace braised in the winter and salad or rice replace hardier noodles. Second, a few signature dishes stay the same. These include MAX Shrimp, formally Camerones Ibiza, prepared with prosciutto and sweet red pepper over a cream marinara sauce.

Cuisine from Israel makes an appearance (a rare treat in the region), considering Executive Chef Michael Kent moved to Canada from there two-and-a-half years ago. But Michael is quick to point out MAX sports a truly global menu: Indonesian Bahmi Goreng, German Schnitzel, French Escargot, Hungarian Ox-tail goulash, Italian pastas and of course, the mandatory steak, this one aged 28 days. The menu concepts for each month, created a week or two in advance, are truly a merger between the two minds. In fact, both Michael and Kent volley back and forth describing a similar food service philosophy while finishing each other's sentences.

“We offer a nightly feature for two reasons,” Kent says, “to test dishes for the next menu and offer some surprises to keep our regular customers happy.”

“I toyed with the idea of running the kitchen myself,” Michael says, but then I met Micky [as he's called] Kent and we connected. I also realized he wasn't cooking to his full potential where he was.” So Michael turned his kitchen and most of the menu over to Kent and focuses on running the front of house six days a week, which is clearly where he is most at home.

MAX is about experience, whether that is an after-work decompression in the lounge, a celebration in the dining room, or indulging in the six course, three wine selection, chef's tasting menu (which also changes monthly) for only $60 per person.

“When I came up with the concept for MAX, I wanted people to come not just for an incredible dining experience, but to also feel free to come to the lounge and just have a cocktail and appetizer,” Michael says. This is also why he added the chance to put yourself in the hands of a skilled chef and opt for the lounge feature: a quarter litre of wine with select tapas for $20 per person.

The emphasis is on lounge, not bar.

In both concept and design, MAX is a blend of contemporary (chrome accents) and traditional (formal place settings) accented by dim lighting and slightly louder than average contemporary country music filling the space.

What you won't see is CNN news or sporting events distracting you from the expressions of your dinner companion, the gaze of your life-long love, or the clear glimmer of your martini glass.  “Televisions are a romance killer,” says Michael, adamant there are no TVs in MAX, which is yet another point of difference at this self-described “hard to find but worth the effort” location in a plaza one block south of Upper Middle Road.

“Again, I say this with humility,” Michael adds. “This is the best value for the quality you are going to get. If this restaurant were in Toronto, you'd pay at least $10 more per entre and tasting menus would start at $100. Our $60 tasting menu is an excellent value for what you get. No one can touch us.”

MAX Resto Lounge is open for dinner only, 4pm to about 10pm Monday to Thursday and 2am on Fridays and Saturdays, offering an evening 21-plus event from 10pm to 2am on weekends with dress code effect.