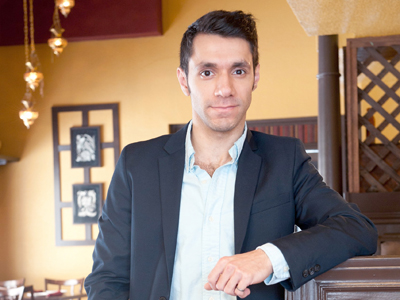 Whether snacking on shwarma, slurping up spoonfuls of mulligatawny soup or lamenting the latest sushi, we are seemingly addicted to distant delicacies. Surprisingly, it seems we have yet to give Persian cuisine quite the same chance.

For starters, the restaurant serves up two of the most prominent Persian dishes: grilled kebabs and home-style stews.

The staple Persian dish is Koobidah Kebab. Ubiquitous as North America's hamburger, the Koobidah can be found on nearly every grill in Iran. At Rayhoon, the kebab starts with just four basic ingredients: salt, pepper, flash-grilled onion and ground beef. The magic is in the preparation.

To start with, a Rayhoon kebab is made from brisket, ground-in-house. After it's ground, the four spices are added and it is skewered, suspended over a flame and grilled. The key to a great kebab is the quantity of ingredients and the skewering technique ““ master both and you've got a kebab to die for, says Emami.

For those looking to sample a bit of everything, an order of Kashkeh Bademjoon is a must. The dish provides first-time-Persian-goers a chance to try three out of five different dips in smaller, sampler-sized portions.

Hankering for a unique twist on a classic dish? An order of Ghalieh Mahi stew is essential. Derived from southern Iran, the dish uses garlic, cilantro, tamarind, and Tilapia. According to Emami, fish is rarely found in Persian stews. “This is very unique in that sense,” he says.

Beyond offering unique dishes, Rayhoon itself is quite unique. Save from travelling to Yonge and Steeles in Toronto, the restaurant is one of the only Persian eateries between Niagara and Mississauga. In fact, Emami has even served customers that have travelled all the way from Buffalo, New York.

In order to capitalize on its uniqueness Emami picked a central spot, easily accessible from both directions: The Village Square in downtown Burlington. The restaurant occupies the rotunda building located directly across the street from the Ukrainian Catholic Church on Pearl Street.

Walk inside, and the restaurant is tastefully adorned with Persian accents.

A massive 30-year old hand-made brass chandelier immediately steals your attention. Imported from Iran, the inimitable fixture constantly dashes the hopes of patrons looking to purchase one of their own.

Walk into the contrasting red and yellow dining room and traditional gold accents are everywhere. Gold glimmers off the ornamental tea set and hookah in the bay window, gold plates and vases glisten on the mantel, and five smaller hand-hammered brass lights sit in a tiered cluster.

Patrons comfiest in a booth are also treated to hand-made Jajeem's ““ small, ornate woven carpets on the back of the booth. According to Emami, even the Jajeems are naturally coloured with dyes from pomegranate skins and other fruits.

Those patrons looking for a little privacy can also book the 35-seat private dining room upstairs or, in the summer, take advantage of the 40-seat patio out back. Guests that wander outside late on a Saturday, can also try a traditional hookah pipe, complete with herbal shisha.

For those who enjoy dinner and entertainment, Rayhoon offers a buffet and belly-dancing event on the third Friday of every month. For $35 guests can try a bit of everything and enjoy a traditional belly dance ““ adventurous patrons are even encouraged to join in.

At the heart of it, Rayhoon is simply offering a new experience. Will the Koobidah Kebab find a place in our mouths and hearts like Tikka Masala? Who knows. One thing is certain, just like our first piece of sushi, it at least deserves a shot.