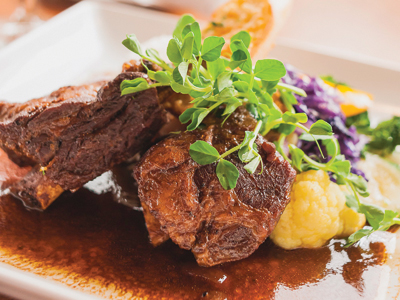 At first glance, Walkers Wine Bar & Grill on Dundas Street in Mississauga doesn't look much different than it did last June. Yes, there's a new sign and the name has changed slightly ““ dropped is the “˜fish market' moniker because, as new owner as of last spring Ron Perruzza says, “every day we had people walk in or call asking about our seafood counter. It was driving me crazy.”

Walkers is not a market. It's a restaurant. Still a seafood restaurant, true, but Perruzza, a life-long Mississauga resident, hopes to noticeably rebrand this now family-run business into a relaxed, elegant neighbourhood place to dine and socialize, where people want to spend time, host corporate and private parties, and generally appreciate the new fresh and finessed menu. He emphasises the fresh, not frozen, because nothing is packaged, premade or processed and most of the seafood, along with wine menu, is sourced from Canada.

“The U.S. market sells enough,” Perruzza says, “I want to use Canadian almost exclusively including Ontario wines.”
The menu might still have the same sections ““ seafood, pasta, pizza and raw bar ““ but subtle upgrades weave through each item, especially salads including Chef Vishal Babooram's pride: fruit and nut salad with hazelnut vinaigrette (inspired by a nutritionist). “My goal is to surprise people a bit,” he says, “and inspire them to try something new.”

If that doesn't put the sea in their seafood menu, Chef Babooram notes he significantly updated the crab cakes with an infusion of coconut milk, a touch of bread crumbs and 90 per cent crabmeat. “That's not something you're going to get many places,” he adds.

Babooram is genuinely excited about food and the career this 20-something chose in high school. He is that rare breed of chef who's genuinely

creative, humble and remarkably personable. His philosophy is simple: “I start with basic flavour profiles and build on that,” he says. “I use only traditional cooking techniques that don't involve short cuts.” He's also proud that he inspired “a light bulb to go off with his staff,” he says. “They're now happy to come to work and to create each dish rather than just drop a bucket of fries in the fryer.” That's not to say traditional fish and chips hasn't remained on the menu, only that it too has a “new crispy beer batter that doesn't retain a lot of grease,” Babooram says, noting that even the batter is an in-house creation.

Born in Guiana, Babooram has experienced more of Canada than most. He moved to Nova Scotia with his family when he was seven. (He's still nostalgic about the fresh seafood boils along the coast, as popular with Maritimers as wiener roasts are with camping Ontarians.) He moved to Mississauga during high school, attended Humber College, apprenticed as a chef in Lake Louise, Alberta where he says he studied under great chefs from around the world as his five-month contract stretched into six years. He then helped open the Central Social Hall, still a successful restaurant in Edmonton, before moving back to Ontario when his mother needed him. “I admit it,” he says with a coy smile, “I'm a Momma's boy.”

Walkers Wine Bar & Grill owner, Perruzza, was lucky to inherit Babooram from the previous owners when he bought the restaurant last year. After working 18 years in the restaurant business overseeing 12 successful franchises, it was time for Perruzza to create his own dining experience rather than be, as he puts it, “dedicated to someone else's cause.” With his two daughters approaching University age, now was the time to leap, drawing on both his self-proclaimed foodie obsession ““ all menu items have been overhauled by himself and the chef ““ and honed hospitality skills apparent in his understated demeanor, polite attention to each individual he addresses and composure under pressure.

Synergy here between the front of house and kitchen ““ and the individuals who run each ““ might be the ideal ingredient to achieve Perruzza's goal of making Walkers Wine Bar & Grill the go-to spot for fresh fish (sourced in Canada), a health-conscience menu (including gluten-free options) and a dining room atmosphere designed for lingering. “Some people have told me the bar area reminds them of that T.V. show Cheers,” he says. Even if not everyone knows your name, it feels like they might. Of course a good Thai crab and prawn stuffed Atlantic salmon or lobster B.L.T. with avocado mayo doesn't hurt either.