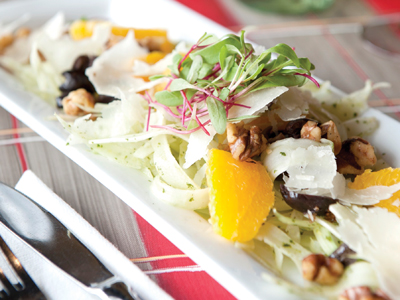 These words are literally food for thought and leave me thinking, because a conversation with Hanna about her restaurant segues to a discussion concerning much larger issues such as family, connection and health. It's easy to see Hanna isn't just passionate about food, she's passionate about people. And for her, providing good food is as much a social responsibility as it is a business.

She's been in the restaurant business for 30 years, has three sons, two step-daughters, three granddaughters, and a passion for sharing her vision of food that brings people not only into her restaurants, but into her kitchen. In 2013, she started HealthyFam ““ an organization she can't say enough about ““ that's designed to bring children and seniors into the kitchen to learn about food, good ingredients and demystify the impression that quality food preparation is difficult. “People are overwhelmed by what they think they are supposed to know,” she says. “Anyone can be taught to feed themselves; they just have to believe it's important.”

“Good food takes time to prepare, but not a lot of time,” she adds. So far her classes count in the thousands, and more than 100 people have participated for free. What started in her restaurant kitchens has moved to Longo's community room. The grocery store chain, along with Metroland Media Group (publisher of this magazine), are sponsors of her HealthyFam initiative, a not-for-profit program that developed out of a concern about soaring obesity rates, particularly among children. Hanna believes, as a society, we are losing our ability to feed ourselves and our families because we no longer pass on food knowledge. “Convenience has come at a cost,” she says. “It's empowering to learn to feed yourself, and your family, and it's a skill we can't go without.”

At Ritorno, contemporary Italian music is piped in among the red-checked table cloths and wooden chairs. A semi-circle bar faces the “Italian Dinner Theatre”. That is, a window to the kitchen, where all the family-friendly meals are created to bring loved ones together over a bowl of homemade pasta, fresh herbs and simple sauces. This is the Italian restaurant of old movies, where customers are greeted like friends and exuberant exchanges are encouraged.

This is also Hanna's vision of a neighbourhood restaurant, a north Oakville neighbourhood where strip malls stand in for city blocks. Opened five years ago, Ritorno is the follow-up to Hanna's other vision: Julia's Ristorante that opened ten years ago in the city's actual downtown. There Italian traditions blend with Latin flavours. But here, it's all about breaking bread with friends (social media doesn't replace human contact, she says), classic flavours and Nonna's overwhelming influence.

“This restaurant is dedicated to my grandmother,” she says. “It's a return to her value that good food is the instrument to bring people together. When I grew up, every family gathering was all about the food, and we still talk about those dishes today.”

Ultimately, you can't talk about Ritorno without talking about Nonna, or specifically an entire wall of Nonnas, which is the first thing you notice when walking into the place. Above the photos the wall is emblazoned with: “Honouring the years of loving sacrifice these women have made for their family and friends.” Below are framed photos of mothers and grandmothers, and customers are invited to hang their own. “These women worked day after day for their families with very little recognition,” Hanna says, “and yet we rarely tell them how much we appreciated it.”

She started by hanging photos of her own mother and grandmother and others followed, including the Prime Minister. Stephen Harper arrived at the restaurant with a framed photo of his mother, Margaret, in January last year while in town for a Ford announcement.

There's no substitution for tradition. “My mother still makes all the gnocchi here,” Hanna says, “from the same recipe I've used in all my restaurants.” Customers can experience Gnocchi Alla Nonna by the plate in the dining room, or from the takeout menu as full- or half-size family servings topped with vodka cream, gorgonzola cream, tomato or Bolognese sauce.

“What we do here is authentic and prepared in the traditional Italian way with no compromise or substitutions,” says Hanna. “400-year-old recipes have passed the test of time.”

But that doesn't mean Ritorno can go without a talented executive chef. “You can have the greatest ideas in the world and know what the dish should taste like, but to know how to create it for up to 500 people is different,” she says. That's where Executive Chef Carl Dahl comes in. He's worked with Hanna for more than 10 years, and here it's his responsibility to take the family recipes, make them work in large quantities, and keep the kitchen running smoothly while Hanna greets guests, oversees another restaurant, runs HealthyFam and appears weekly on her 30-minute cooking show, Return to the Table with Julia, viewed on a regional cable station in Oakville and Burlington. “I've had a lot of local celebrities on that show,” she says, “along with my mother who likes to tell me what I'm doing wrong.” Clearly, even after 30 years, some things never change.