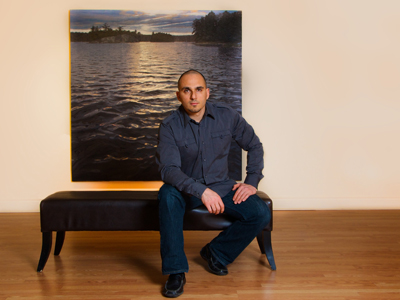 Boating on the sparkling water of Honey Harbour, artist Joe Sampson reaches for his camera. “I can take up to 300 photos on a shoot and maybe a few are good enough to paint,” says Sampson.

At first glance, Sampson's paintings look like photographs. “I amalgamate photos and combine different things ““ it's not just a reproduction of a photo ““ it's my own little twist,” he explains from his Mississauga home studio.

Water has always been a huge part of Sampson's life. He was born on the island of Malta and moved to Canada with his family when he was seven.

After graduating from Toronto's Ontario College of Art in 1998, Sampson began as an illustrator working on editorial and book advertising.

“I took a break from painting and when I came back, I did a bit of fantasy and then I got into landscape ““ so it was a transition, experimenting with different subjects,” he says. “It's all part of being an artist, but when I started painting water I knew this was my thing.”

What's most fulfilling for Sampson is the connection people make with his work. “When they can say, “˜oh this is Barbados' or “˜I know that beach' and they know exactly where it is, it's actually amazing,” he says. “Some people can pick out a body of water and say, “˜that's Lake Erie' and they know that it's Lake Erie in Port Dover and it's a stormy day. Then I know they really know it!”

Sometimes Sampson's paintings elicit an emotional response. “A photographer commissioned me to paint a picture for his wife's birthday. He asked if I would paint a water scene from one of his photos, so there was a connection. I normally don't do that, but he happened to take a really good photo. He asked me to leave a note next to the painting in my booth and when she read it, she started crying,” he recalls.

For a number of years, Sampson worked as a part-time art teacher at Mississauga's performing and visual arts school, Studio PAVAS, but once his participation in shows and gallery work increased, he had to leave teaching to focus on his art.

He maintains a strict schedule of at least 40 hours per week painting oil on canvas and oil on panel, using techniques like resin coating for interest. His water paintings range in size from 16-inches by 16-inches to 70-inches by 70-inches, but recently, Oliver's of Oakville purchased his water scene 21½-feet long.

“That consisted of two canvasses joined together to make one image and it's the largest piece I've ever done. The scale creates a great impact as far as the feeling, the mood and the believability of the image ““ it's like you are on the beach,” he remarks.

The preservation of water in our lakes and rivers is important to Joe. He supports Lake Ontario Waterkeeper, a charity devoted to keeping our water safe for drinking, swimming and fishing, by donating paintings to their gala and raising awareness about their endeavors to keep Lake Ontario clean.

“It's limitless what you can do with water. Nature determines the palette. Being at a beach all day, colours change from blues to silvers, to grays, to reds, to warm tones. You can paint that same beach every day and it would be a different painting!”