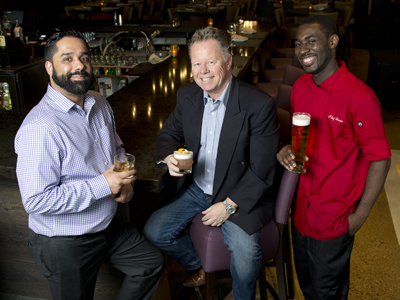 Surprise. Stir Kitchen & Beverage Co. Chef Hans Boadu loves to create soup, which is the first time I've heard a chef make that claim. His specialty is Moroccan Style with labneh and sprouts.

“Soup gives you a chance to be creative. It's an easy dish, but surprisingly challenging to do flavourfully. The first taste should be “˜bang' and blow your mind,” he explains with youthful exuberance.

His next favourite? Seafood. He claims the seafood offerings ““ such as grilled salmon with lentil succotash ““ are everything you want seafood to be.

At first glance, the menu at Stir looks remarkably traditional ““ beef, salmon, pasta, wood oven pizza and chicken. But it's traditional with a twist, Operations Manager Faz Rajani tells me.

A significant twist, Chef Boadu adds. One of the challenges for this location ““ minutes from Highway 401 and Square One in Mississauga ““ is to create a menu familiar to residential and business clientele in the area while updating classics just enough to ““ almost ““ create a new trend. That trend might be the “bang” of the first bite.

“Spice is in,” says company president Brian Meikle, and the first bite of what I thought would be a classic spinach dip with chips proves him right. First, there's a sharp flavour to this cheddar cheese dish, and second there's no spinach. There's kale, and that's the kind of unexpected update in Stir's menu. Others include Crispy Chicken, which is Stir's take on classic bar staple wings. These are solid pieces of chicken with no bones, and no mess, Rajani says. But they are served with blue cheese and veggie sticks.

If you're craving Hip Restaurant's iconic Hunter Schnitzel, don't worry it's still here. Yet even that has seen an update since first appearing on the Hip Restaurant Group's menu by the team's original TEN chef a decade ago.

Yes, Stir is the next phase of the highly successful regional Hip Restaurants team of four partners: Brian Meikle, president; Faz Rajani, director of operations; Andrea Pierce, manager; and Ryan Elliot, bar manager. Stir's atmosphere, design, menu, and evening entertainment concept is a blend of what worked in previous projects: On the Curve, TEN and West 50. The creation of Stir was in the works when the team received an unexpected offer to buy TEN.

“A group of executives came into TEN for lunch one day, liked the location, and made us an offer,” says Rajani. The deal went through at the same time this new project was in the works, so there was a soft opening of the restaurant mid-November.

Now, the team can focus on Stir, an amalgamation of everything they did well in the past. Meikle, whose restaurant start-up count tops seven, says, “Changing it up on a regular basis, staying on trend ““ or even better ahead of the curve ““ and creating the right vibe,” are the keys to culinary success.

Stir is an interesting concept for two reasons:  One, if you're keeping up with the ebb and tide of the local food and restaurant scene and love hearing success stories, Hip Restaurants is one of them. Two, if you're simply interested in a night out in Mississauga that includes cocktails, dinner and a little light music, there's now a place closer to home.

Stir is styled with all the posh, but not the pretension, of a boutique hotel targeted at professional people 25 (or maybe 35) plus who want to unwind, decompress and linger past dinner listening to acoustic music or jazz during the week ““ or getting their dance on to a DJ Friday and Saturday evenings.

“We are not a club,” Rajani, emphasizes. Stir is about offering diners evening entertainment such as musicians during the week and DJ music on weekends, so patrons can stay after dinner and unwind, late into the evening or right after work.

Stir's dominating bar, lined with purple chairs and punctuated by six large screen TVs showing both sports events and business news, pours 32 different tap beers, mostly craft, such as local Great Lakes and Nickel Brook from Burlington, and some imports from California and Scotland. “We don't just fill the lines,” Rajani says about the beer offerings, “we put some thought into it. We have a combination of IPAs, pale ales, and even Goose Island from Chicago, considered the original craft brewery.”

Thought went into the cocktail menu too. True to theme, it's all about the classics with a twist. There are eight signature cocktails and three types of the Old Fashioned and even a Rob Roy.

If privacy is what you're looking for Stir is equipped to accommodate business meetings, private social events, company parties, etc. for 60 to 75 people in the back room, or “studio” as they call it.  Accented by double LED-lit wall-mounted fireplaces that cast a subtle purple glow, this room is equipped with flat screen TV for presentations and can be closed off from the dining with sliding urban barn-style doors.

What's next? Will we see other locations of Stir throughout the region? “It's an interesting question,” says Rajani, “we might try new concepts at different restaurants or recreate Stir at other locations.”

“Well, let's do this well first before we start talking about new locations,” Meikle says. “But it's a possibility.”