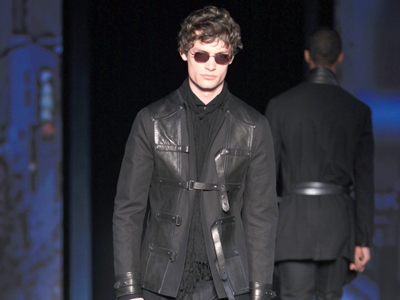 Menswear designer John Varvatos is known for his rock n' roll inspired collections, and the American fashion label has a legion of genuine celebrity fans. Varvatos is inspired by music, his home of New York, and many of his music industry friends.

For fall/winter 2012 the collection is stacked with textured jackets and outerwear and chunky, yet weightless knitwear. Trousers have a new line with an articulated knee and a small tab at the hem, making it easy to wear them on the inside or outside of boots. Add a new leather piece to your fall wardrobe to add some rough texture, and a touch of militaristic style.

“The spirit of my brand has always been about a contemporary attitude that does not forsake an appreciation for tradition, quality and craft,” says Varvatos. “For this collection inspiration came from the city of New York, with its seamless juxtaposition of the old and the new: a place where Central Park and the Guggenheim, the Chrysler building and the Statue of Liberty melt into one, creating a unique urban texture. The (runway)show begins with an animated film of a young man's journey through this magical city, exploring its amazing past with a constant eye to its present modernity and its future. The collection expresses the same connection between old-school savoir-faire and a contemporary way of being, all condensed in a precise, timeless message.”

Adding to the rock star allure of the line, Varvatos scored music legend Paul Weller and Miles Kane for their latest ad campaign.

Weller has had a long and diverse history in the music industry from his days with English punk band The Jam and The Style Council to a successful solo career. He has enjoyed four decades of critical and commercial success, and is still recording at 53.

Kane is an intrepid young performer whose acclaimed 2011 solo release Colour of the Trap was one of the UK's biggest selling debuts. The 26-year-old was dubbed “one of Britain's land- mark composers” by an industry magazine.

The images for the campaign were shot in Manhattan by Danny Clinch, against the distinctly blue-collar backdrop of a Lower East Side pawn shop. The iconic photographic style, historically used to capture everyone from Bob Dylan to the Clash, vividly conjures the 1960s music scene.

Clinch is an acclaimed music photographer and documentary filmmaker who has captured some of the most iconic names in music, including Cash, Springsteen, Dylan and Tupac, just to name a few. His work has appeared in major fashion magazines and on hundreds of album covers.