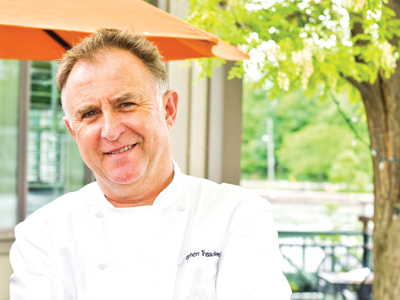 Everyone loves a good story and that's what Treadwell in Port Dalhousie has. Well, that and good food. Specifically, “quality food, not B.S. cuisine,” according to chef and co-owner Stephen Treadwell, who opened the restaurant in 2006 with his son, James, also co-owner and sommelier.

When you dine at Treadwell you learn the story behind the food in front of you, the wine in your glass and exactly who produced it all and where. The menu changes seasonally and Stephen says each staff member tries every dish before it goes on the menu. “We tell them where the ingredients came from so they can explain it to the customer ““ customers are looking for experiences and good food. We do good food, not fast food.”

Treadwell Sr. is iconic in the eat local foodie world of the Niagara region. Originally from England, he's a traditional chef with a big personality as straight-shooting as his food. The emphasis at Treadwell is on ingredients, and not too many of them in one dish. These ingredients, however, have to be the best, the freshest and the most flavourful. That's why Treadwell sources as many local artisan products as possible ““ about 75 to 80 per cent from regional suppliers, including the wine, another integral part of the Treadwell experience.

Formerly the head chef at Queen's Landing in Niagara-on-the-Lake and Auberge du Pommier in Toronto, Stephen brought the European concept of “farm-to-table” dining to Southern Ontario almost a decade ago, sourcing regional suppliers such as Cumbrae Farms and Best Baa Dairy within an easy transportation distance to the restaurant, located in St. Catharines.

“Seven years ago the fresh foods concept was something different,” he says. “Now everyone says they are doing it, but most don't to a great extent.” Treadwell is so committed to their local suppliers they list them on the back of menus and encourage patrons to contact them including Bertha's Bounty eggs ““ a third generation free-run egg farm in Fonthill producing a blue-tinted Ameraucanas heritage chicken egg (among others). Treadwell has a standing order for ten dozen each Friday, almost exhausting Bertha's supply, and these deep yellow yolk eggs find their way into Treadwell's homemade pasta and the occasional amuse bouche. Those wishing to try a farm-fresh scramble at home can purchase a dozen eggs, along with jars of Treadwell's homemade preserves, from the deli fridge beside the coat rack.

Treadwell is a destination restaurant located along the waterfront in Port Dalhousie minutes walk from the beach and marina. Admittedly, 80 per cent of their clientele is from the GTA according to Stephen and James, and that's due in part to good press in various Toronto media outlets. “We're about a 30-minute drive from Burlington,” says James, also a Burlington resident. People come to this historic building overlooking a man-made waterfall and walking bridge to spend the evening lingering over a plate of Pan Roasted Lake Erie Pickerel with “Pinque's” Pork and Fennel Sausage or Braised Shank of Ontario Lamb with buttered leeks and crushed fingerlings. They also call on the chef for catering in the Niagara region, and beyond to Halton and Toronto.

For years, the building was known as Albert's, a sports bar restaurant popular with locals. About eight years ago, according to Stephen, several local investors including current landlord and owner of neighbour Lincoln Fabrics, bought the building and restored it, primarily rebuilding the water-worn foundation. A restaurant moved in, but closed within months. Stephen saw an opportunity to strike out on his own with his son James, recently back from touring wineries in Europe and cultivating a passion for wine.

Stephen closed the building for a few months, papering the windows for secrecy, and went about renovating, redecorating and installing a state-of-the-art $100,000 kitchen. According to the tale, on the day before the opening, two elderly locals who spend their afternoons at the Tim Horton's across the street peered through a gap in the papered window. “Ah, that's fine dining,” one of them said. “It'll never last.” That was seven years ago, and Stephen insists his restaurant is upscale casual for simple but open-minded tastes willing to try new ingredients and new wines, particularly those from small regional vineyards in both Niagara and Prince Edward County.

“We try and put personality into what we do,” says James, who spends his evenings in the front of house. “Our wine program reflects the kitchen's philosophy and we've been told we have the best Ontario wine list in Canada.”

Wine, at the table or in Snob Bar adjacent to the dining room, is an important part of the experience here. Including James, there are six sommeliers on staff so patrons are never without paring advice at any seating. The goal is to not only list local wines people recognize, but introduce them to new brands, varietals and vintages they won't find at the LCBO. “These might be older bottles you can't find anymore, or small batches of wine from small wineries,” says James. Not all wines at Treadwell are locally produced; there are international products on the list too, but that's not the focus. Wine list staples include Thirteen Street, Flatrock and Mountain Road Wine Company.

“Many customers ask, “˜Why haven't we tried this before?'” James says. “The answer is it's from a small winery that only made 500 cases and we bought the entire harvest to serve by the glass.” So, like many menu items and combinations, you can only find it at Treadwell, worth the drive
to Port Dalhousie.
RECIPE: Cold Spring Pea SoupRECIPE: Pan Seared Lake Huron Whitefish