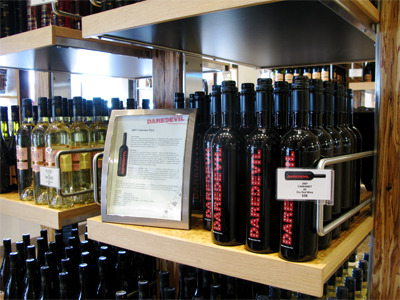 Steve Byfield is using his reputation in the wine industry, an entrepreneurial spirit and a bare-bones staff to create what he calls a “homeless winery”.

Nyarai Cellars was created one evening when Byfield shared a glass of wine with Sharon Marks, president of the Niagara chapter of the Ontario Wine Society. It wasn't long before brothers Rod and Mike Ingram invested and Nyarai Cellars was born.

Nyarai Cellars (nyaraicellars.ca) has no real estate, no winery building, no tasting bar and no retail store. It's a phenomenon known as a virtual winery. Just creative labels, plenty of wine and a lean operation.

Instead of investing millions of dollars to buy land, plant a vineyard, launch a winery and have the full staff necessary to run a bricks and mortar winery, virtual wineries put as much money as they can into what goes into the bottle.

It's true, not anyone can put wine in a bottle and sell it, so how does it work you ask? Byfield, is winemaker at Calamus Estate Winery in Jordan and he's running his virtual winery through the Calamus winery license. He leases the equipment, the space he needs and the rights to run his virtual winery under the Calamus license, yet it's a stand-alone business.

Calamus owner Derek Saunders explains, “Steve wanted his own brand and it's a great way for me to keep our best talent in-house.” What isn't said is that virtual wineries don't compete with the hand that feeds them.

Baker romantically refers to his project as a “garrista-style” wine making operation. He sources grapes from the oldest section of the Picone Vineyard in Vineland and ensures they're cropped to two tonne per acre. He uses three sorting tables to select only the ripest berries and ferments only the free run juice into his 100 per cent Riesling, a grape that Baker (if you couldn't tell by now) is obsessively passionate about.

Baker started in 2005, producing a mere 125 cases of Riesling because it was “something I've always wanted to do.” Five years later, he's just bottled almost 400 cases of the 2009 vintage ($35/bottle, charlesbaker.ca) and it's impressive. It starts with a mineral edge that underscores the Gala apple, baked pear and creamy white peach notes backed by a strong, steady body and firm, zesty acidity. The finish is elegant and mouthwatering; the best Riesling I've tasted from Niagara yet.

Like Byfield, Baker sells his wine to restaurants, through a private mailing list and the website. Traditionally, virtual wines are not available at the wineries they work out of but I did find one exception to that rule: DareDevil Wines.

DareDevil Wines (daredevilwines.com) is a virtual winery owned by sommelier Marcel Morgenstern. Morgenstern is sommelier at Pillitteri Estate Winery in Niagara-on-the-Lake. Inside the Pillitteri retail store is a proud display of DareDevil 07 Cabernet ($36/bottle) for customers to try and buy.

The DareDevil Cabernet is an alluring wine with aromas of young blackberry, cinnamon and cedar over cigar ash. On the palate is a straight core of baked cherries, cured meat and a toasty cinnamon finish.

So can one person really make a winery? Donald Ziraldo thinks so. Last November Ziraldo, co-founder of Inniskillin Wines and iconic figure in the Ontario wine industry, replaced a 60-year old cherry orchard with various clones of Riesling grape vines. His grapes too young to bear fruit, Ziraldo just happened to taste some barrel samples of icewine from John Howard's cellars (Meglomaniac Wines) and was so impressed, he bought it all!

His long-time winery partner and winemaker, Karl Kaiser finished the 400 cases of Ziraldo Icewine ($59/375mL, ziraldo.ca), it was released and sold out in five weeks. A trickle of the icewine made it to the LCBO Vintages but most travelled across the globe.

There are no statistics on virtual wineries in Ontario because these entrepreneurs with a palate work under existing licenses so it's not possible to track them.

I found 2006 American statistics (virtual wineries require a stand alone license in the USA) that show out of the 5,970 wineries throughout the USA, 1,587 are virtual (1,018 in California alone).  Recent statistics are not available but experts guestimate the numbers for virtual wineries have more than quadrupled since 2006.

A virtual winery is a relatively inexpensive way to “set up shop,” explains Baker who, “didn't get into this to start a winery. This kind of winemaking fuels more interest (and growth) in our industry.” And what could be better than that?

Lynn Ogryzlo is a food and wine writer and author of Niagara Cooks, a farm to table, and international award winning cookbook. You can reach Lynn for questions or comments at niagaracooks.ca