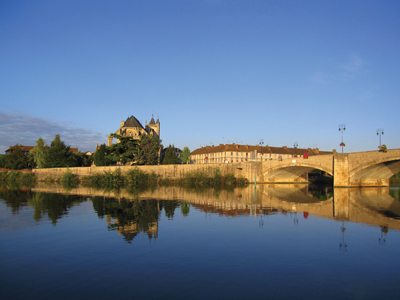 I hopped off the deck of the Nooit Volmaakt, and sprinted up to speed for a morning run through the French village of Moret. The deserted pre-dawn streets snaked along the canal, past a medieval church, half-timbered cottages and stone bridges. There was still mist on the water.

The one person I passed, a girl with tousled hair and mile high heels, hailed me with a question: “How far do you go?”
“Five kilometres.”
“Hah! (Picture a Gallic shrug.) Tu es folle. (“˜You're crazy'!) But I should do this too. Mais, not today. Bonne chance!”
And she continued on her way and I on mine.

By the time I got back to the barge, the sun was warming the mirror-still water of the canal and the mist had disappeared. There was coffee, warm croissants and fat little pain au chocolate set out for breakfast. The Captain had made an early bicycle run to the bakery.

It was going to be another astonishing day on the canals.

While the cruise industry itself has undergone spectacular growth in the last decade, the art of cruising well has changed. In the cruise industry, bigger doesn't always mean better.  Never much enamoured of the commercial anonymity of large ship cruising, I've found that smaller ships provide a richer return on your vacation investment. Mid to small sized ships like the SeaDream or the American Safari Quest, or the river cruisers like Avalon's Panorama, provide more intimacy and a closer connection to the ports they visit. But a barge plying inland waterways and canals is what I like to think of as “˜cruising distilled,' at its smallest and best. It's a concentrated experience.

Barging is the ultimate in cruise downsizing. With guest capacities that range from four to a maximum of 20, it is as intimate and personal as sailing can be, short of two men in a rowboat, and I am now a confirmed barge-o-phile. And I'm not alone. Barging is finding a broad appeal among sophisticated clients who seek privacy, exclusivity and a trip that isn't mass-market. The North American appetite for barge cruises is growing: European Waterway's bookings from the U.S. and Canada, for example, increased 70 per cent between 2011 and 2013.

Europe is an ideal place to experience canal cruising. The countries are criss-crossed with canals that, at one time, were the highways of commerce, allowing goods to travel quickly and easily from city to city, country to country. France alone has more than 2,700 miles of inland waterways with a 750-mile network of canals linking up the main rivers.

Adding to the pleasure of a French barge cruise is the fact that it provides an excuse to spend five days in the City of Light. Many of the barge cruise companies include plans for pre- and post-cruise time in Paris. We had stayed in the Hotel Duc de Saint Simon in the Saint-Germain de Prés area, and soaked up the beauty of the nearby Musée d'Orsay. We'd nibbled macaroons at Ladurée, drooled over the treasures at Galeries Lafayette and walked through the artsy streets of Montmartre. Great dining, art, shopping ““ beauty everywhere ““ who could not love a few days in Paris?

When it was time to meet our boat, we hopped on a train for the 55-minute ride to the small city of Sens. Many of the French barge departure points can be reached by TGV high-speed trains from the stations in Paris, or by short flights from CDG airport. Some cruise lines, like European Waterways, will pick you up by limousine in Paris and take you to your  boat. (If you are planning to go by a train that leaves from the Gare de Lyon, be sure to make time to dine in Le Train Bleu, a belle époque restaurant that is an undiscovered gastronomic jewel in Paris.)

Our barge, the Nooit Volmaakt, is an historic Dutch sailing boat that had hauled sugar beets and peat through Holland and Northern Europe for many years. After several career changes and a few overhauls she was moored in front of her former owner's property outside Paris where her present owners saw her and fell in love. Mary and Marc are Canadians who spend winters in Victoria, B.C. and sail the Nooit Volmaakt along the waterways of France from July to September.

The barge accommodates four guests in two private staterooms. Marc acts as captain and general factotum, and Mary cooks and assists with everything. Teddy, the barge dog, is a small white poodle whose job is to make friends with all passengers.

There are vestiges of the original ship in the main rooms, including a traditional Dutch alcove bed with sliding doors, and the graceful lines of the boat are true to the classic design from its early days.

We spend six days drifting along quiet canals lined with lovely villages, bordered by pathways where you could hop on a bike and be at the next lock before the boat caught up. There are four bikes on board for guests to use. If you feel ambitious, you can help to open the lock gates. On our first night we enjoyed a dinner of fresh moules in a restaurant in Sens, and the next day searched for treasures in a Vide-grenier ““ meaning “˜empty attic,' the French equivalent of a neighbourhood garage sale. I exercised constraint and passed up a set of antique embroidered linen pillow cases but couldn't resist a bag of candied violets, a specialty of the area. Drop one of those purple gems into a glass of champagne and you have instant French sophistication.

There is art ““ many of these villages south of Paris were home to the painters of the Barbizon school. We moor for two days in Moret where the artist Alfred Sisley lived for years, painting the river and its bridges and meadows. The main bridge looks the same today as it did in his 1890 painting, The Bridge of Moret Sur Loing, which we had seen in our visit to the Musée d'Orsay. There are museums and ancient churches, and in every town, excellent restaurants within a short walk of our barge's berth. In Nemours, there was a show of exquisite bridal dresses designed by three local women who had become famous with their Paris couture house called Cymbeline, displayed in the town's 12th century chateau. There were runny local cheeses, bottles of Chablis Premier Crus, and on one memorable night, a dessert called “˜framboisine' ““ chocolate mousse with a raspberry middle layer, robed in chocolate and topped with fresh raspberries and red currants.

There was the quiet serenity of tree-lined canals where the only traffic might be another small barge drifting slowly by.

This summer, the Nooit Volmaakt is going to be exploring the Canal de Roanne í  Digoin and the Canal du Centre in Southern Burgundy. “It's a beautiful run,” Marc explains. “There's less traffic than the Midi which is so busy in the summer. It's a relaxed and tranquil cí¢nal, with chateaus and canal side restaurants, great villages and a series of locks noted for being in a beautiful setting. There are music festivals, and an Escargot Festival in Digoin.”

Not all barges are this small and intimate, of course. Marc and Mary provide a highly personal and individualized experience, with itineraries and menus and activities that change to please whoever is on board. Other barges are larger, ranging all the way up to 20 passenger capacity, and with more amenities and space.

Later we sail the canals on the Panache, a European Waterway's barge that accommodates up to 12 passengers. It is elegantly appointed with six junior suites, all with private baths. The barge's main salon features comfortable sofas, big windows and a piano, as well as a large dining room and an open bar. The sun deck has a heated whirlpool. There's WIFI, sometimes.

The chef, Sebastian, produces meals that rival Michelin-starred restaurants, and the wines are exceptional. Our captain, Jules, often joins us for dinner or on excursions, and his anecdotes are colourful and entertaining. The spaces are larger, the creature comforts more plentiful and there's more company. Dinner conversation is animated and often lasts long into the night.

For the 2013 season, Panache will sail through the Champagne wine region west of Paris as well as along other itineraries. European Waterways also has a new six-passenger vessel, the Clair de Lune, which will explore the 300-year-old Canal du Midi, skirting the Mediterranean shores before turning inland through ancient villages, Roman fortifications and vineyards, visiting Carcassonne and Narbonne. And also new for 2013 is the eight-passenger Rosa, a Dutch “Clipper” barge refitted in 2012 which will be cruising to Castets in Bordeaux.

While barges are smaller in size, the cost to sail on one is not. These are pricey voyages, because of the small number of passengers and the level of customized service. A five-day cruise on the Nooit Voolmaakt is a bargain at $1,500 CAD per person, while a seven-day cruise on the Panache runs to about $4,900 CAD per person. But these are generally all inclusive cruises that include meals and alcohol, most excursions and often transfers.

Sitting on a lounge chair on the top deck of the Nooit Volmaakt, with a brace of ducks swimming alongside and a mug of hot milky tea in my hand, I watch an elderly man walking his dog on the canal path. He waves and smiles. Teddy, the barge dog, barks once and then settles at my feet. I can smell dinner ““ tonight it is duck with a black currant and crí¨me fraí®che sauce, one of Marc's specialties ““ and it feels like this is what being on a boat should be ““ personal, comfortable and restorative.