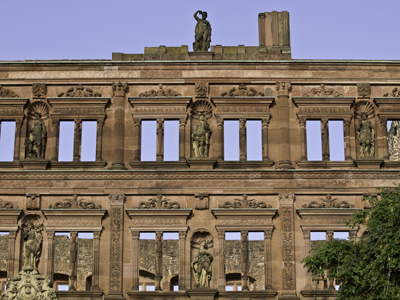 There are certain things one expects to find in a university town. Bicycles, bars and books cluster at the top of the list. But there aren't many university towns that can boast a student prison. In Heidelberg, you will find such a place.

It's been a century since they've actually locked anyone away in the Heidelberg Student Prison.

From 1778 to 1914, a little too much hooch, a late night skinny dip or an unruly fencing duel could get a young man tossed into a jail cell for up to a month. These days the 19th-century stone cells have attracted a different clientele to the bizarre 21st-century museum and tourist attraction. Every square inch of the walls and ceiling are covered with graffiti and pictures; passionate words bemoaning the politics and bread-and-water treatment suffered by students in days gone by.

At its heart, Heidelberg is a city with a passion for words. For hundreds of years, learned men were drawn to the picturesque medieval town on the banks of the Neckar River. It was here that the country's first university opened its doors more than 800 years ago. And it was in 1518 in Heidelberg that Martin Luther ““ the Augustinian friar whose ideas sparked the Protestant Reformation ““ publicly debated his Ninety-Five Theses, a list of protests against the practices of the Catholic Church. Words by the German poet and philosopher Johann Wolfgang von Goethe, the French writer Victor Hugo of the Romantic period, and the American novelist Mark Twain spilled onto the pages, all inspired by the beauty of Heidelberg.

“Exactly six months after he pinned his controversial theses to the church door in Wittenberg, Martin Luther came to Heidelberg to debate and expand upon his views,” explains Susanne Fiek, a Heidelberg guide who has lived in the city of words for all her life. “He could speak freely here. We know that the Augustinian monastery where he debated was here because it is shown in maps and documents of the old city.”

The richness of Heidelberg's political and literary pedigree may be lost to the throngs of modern-day visitors that fill the main street, the pedestrian-only Haupstrasse, lured by the shops, the bars and the usual trappings of mass tourism. The city is long and narrow ““ the red sandstone buildings of the Old Town are clustered along the banks of the river, hemmed in on the back side by a steep, wooded slope crowned by the ruins of the region's most famous castle. But mere steps away from the manic commercial energy of the shopping district are the leafy squares, cobblestone walkways, fountains and statues that fuelled the creative intensity of writers, poets, philosophers and thinkers. Only the whirr of a passing bicycle or the peel of a church bell cuts into the quiet of Heidelberg's side streets.

“It's the university, it's the city, it's the castle,” muses Fiek about what makes Heidelberg a must-do stop for travellers meandering through this part of southwest Germany. “But my favourite spot is the castle on the hill. No matter when you come ““ rain or shine, spring or fall ““ there is always something to it.”

It's 90 seconds by funicular ““ or a considerably more challenging 316 steps on foot ““ up to the Heidelberger Schloss castle that commands the hilltop, towering over the Old Town below. The funicular was first cut into the mountainside in 1890 as a way to help British and American tourists on a Grand Tour of Europe make it to the top. Once a well-fortified stronghold, the Gothic-style castle was built from the 13th to the mid-17th centuries; now, it is uninhabited ruins, the town's nod to the German Romantic period. On a warm summer's evening concerts, plays and operas are performed among the castle ruins.

Whiling away a few hours at the castle is the town's number one tourist activity. “The nicest time is the early morning or late afternoon, when the red sandstone reflects the beams of the sunlight,” says Fiek. From the terrace, there are spectacular vistas over the river, the bridges and the red roofs of the town, punctuated by the occasional Baroque church spire.

According to Fiek, wine production was once a burgeoning industry on the surrounding hillsides but was brought to its knees by the infestation of the phylloxera pest that devastated vines across Europe.

“These hills used to be covered with vineyards,” she explains, pointing to the green slopes that rise dramatically from the banks of the river. “In the late 1800s a wine bug destroyed many of the vineyards in Europe. Not just Germany, but also Switzerland, Italy, France and Austria. The wine industry was wiped out ““ until they were able to import healthy plants. That is the reason you are no longer allowed to plant new stock; you must graft it onto disease resistant vines.”

Inside the castle ruins, there is room-filling proof of the prominent role wine once played in the area. An enormous oak wine barrel ““ at 219,000 litres it is the world's largest ““ was once a bank vault of sorts for liquid tax deposits.

“This is a wine region and people at the time had to pay 10 per cent of their wine production as a tithe, a compulsory tax to the Prince-Elector, a position of power second only to King or Emperor. All the wines were mixed together in this enormous barrel, although the Prince-Elector would not actually consume any of it. He would drink only from his own private stock.”

Legend has it the massive cask, known as the Heidelberg Tun, was guarded by Perkeo, a court jester in 18th-century Heidelberg and a drinker of some renown who has become the unofficial mascot of the city. The famed vat captured the imagination of some of the great wordsmiths who passed through the city. It appears in Mark Twain's A Tramp Abroad and Victor Hugo's Les Miserables, plus many other works of literature.

At the top, under the watch of the castle ruins, walking along the terrace and through the gardens, there's a peacefulness that seems to slow time. Perhaps it's the view. Perhaps the way the evening light softens the edges of a hurry as daylight slowly fades to evening. And, as the quiet of the space seems to play games with the passage of time, there seems less of a rush to make it back down the hillside. It's a journey that is best taken one step at a time.

If you go
Each of the rooms at the Hip-Hotel on the pedestrian-only Haupstrasse is themed after a world-class city.
hip-hotel.de/en/

At night, the patio at the Goldener Hecht Hotel's restaurant is the romantic spot in town. Located next to the softly lit bridge, the menu is peppered with German specialities including schnitzel, beef goulash and sweet apricot dumplings for dessert.
hotel-goldener-hecht.de

Getting to and from the city is easy by rail. Eurail passes for train travel must be purchased before leaving North America.
eurailgroup.org