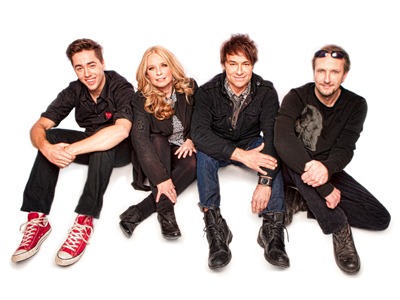 Spoons from their classic hit, “Old Emotions,” released in 1983. Lead singer, Gord Deppe may have a few old emotions of his own looking back over a career that's spanned beyond the 80s. He's also acquired a few new ones (and some new hits, too) now that the band has released its first new album since 1988. West of the City talks with Gord about the band's new album and what he's been up to for the last little while.

West: The album, much like previous Spoons releases, has a range of mellow mixes and upbeat songs, what makes it different than any of the past albums?

Deppe: It's the first collection of new songs we've done in over 20 years, kind of unexpected for some people. Frankly, I thought we'd never do another album. People kept asking but I never really took it seriously. It was last April we had our 30th anniversary show in Toronto. We tried out a couple of new songs that I brought to the band and the reaction was so good from that so we decided to record a CD single (“Imperfekt/Breaking In”) like the old days which we had ready for July 1 ““ a year ago ““ and from there we got interest (from the label) and the moment we saw that, the floodgates were opened and the songs just came. I would never do an album just for the heck of it, there has to be true interest and I get excited.

West: Did you already have a stockpile of songs, or did you begin writing specifically for the album?

Deppe: There were a couple of little germs of ideas (last summer) that ended up being used that I've had kicking around for a while. I have still been busy ““ I've been playing with another band and have recorded other projects that were non-Spoonsy but there were certain ideas kicking around and I thought if I ever did another Spoons album they would fit, especially the end track: “Closing Credits.” It was a perfect way to end it.

West: Any other tracks that stand out as favourites?

Deppe: I like every single song, and when we go out I want to play every single song, there's so much variety.  I like “End of Story,” because it really harkens back to the “Nova Heart” days, it has a real “Nova Heart” vibe and melody hidden in it. The album wasn't a conceptual thing where everybody planned it ahead, but I thought we should have at least one song, which has a taste of those old days. I really enjoy that one. It's interesting lyrically because it recaps all of the other songs. It's not obvious but it has a little hints of each other lyric in there from all of the other songs.

West: Will this be your last album?

Deppe: I wouldn't say that, but if it is, that's the one to go out on. I'm so happy with it. Of all the things that I've done I'm so glad that I have this body of work. The album is (also) coming out on vinyl.
West: Your manager indicated that the album took a while to finish, any specific reason?

Deppe: That was just a response to fans because they were getting a little antsy about tour dates and the release party, which we finally had (in early June). The album was actually done last October. It was just the regular red tape of the industry. (It was available in early March via iTunes).
West: Do you have a home studio that you kick ideas around in?

Deppe: I'm totally anti-home studio. I tried dabbling with it but I have no patience for wires and buttons. Until just last year I threw all my ideas down on a tape deck.  Luckily Sandy's husband ““ who produced the album ““ has a nice studio up in Guelph. We kind of went against everything we planned that we were going to do. We thought if we were ever going to do an album we thought we'd better do it big: get a big producer, big downtown studio, and big budget. We did everything opposite: low budget, produced it out in Guelph in a home studio at our own pace. But, when we finished it, it was perfect. I looked so much more forward to driving to Guelph to record rather than downtown Toronto.

West: What have you been doing between the last album in 1988 and now?

Deppe: We never really stopped playing, we did summer festivals here and there. Whenever someone needed a token 80s band, hey ““ especially if it was local (Mississauga, Burlington, Hamilton). We did a lot of those but it was never really with any plans to do anything bigger. I had other bands that I recorded an album with ““ Five Star Fall, that had an 80s feel to it but was more modern. It did quite well.
West: Do you feel like a “token 80s band”?

Deppe: Well, with this album it feels like year one all over again and the freshness of starting out. It has that Spoons feel to it but it's totally contemporary. We're sort of in that comfort zone of what (younger people) are listening to anyway, whether it's Metric or The Killers, so they could not even know that we existed in the 80s. I'm really into new music; I don't look back a lot. I'm pretty current with my writing so I don't think the Spoons are a nostalgic band anymore. What's great is that at our album release our diehard fans gave us the biggest compliment that the new stuff is even better than the old.
West: Do you like performing to a hometown crowd ““ is it an easy way to knock out a few sets and head home?

Deppe: We've stayed around here for quite awhile so now we're going out West and we're back in Burlington to perform at its Canada Day festivities, then we go out East and there's a really big tour in the works for the fall.

West: When you're not writing and performing, what else keeps you busy?

Deppe: I'm a husband and a dad. It's a pretty simple life. I've always kept it very separate. I don't live the rock and roll lifestyle; I don't go out at night unless I'm playing. I like family life, gardening, the dog, kids ““ all those kinds of things. I'm a big fan of old movies so I watch a lot of those. If I listen to music it's in the car and I still like CDs. I like to have a hard copy of what I'm listening to. I don't like trying to stick everything into a little compact gadget. I guess I'm old-fashioned that way.  I like to discover a new album and then really lose myself in it for a few weeks.

West: Have there been any changes to the band since the old days?

Deppe: We've got two new guys in the band, which freshens things up. It's really more modern than anything we did in the beginning. The whole album was just Sandy and I. Before we got the new drummer and keyboard player we didn't bring in the old guys and then we started recording using drum machines and me playing the keyboards. We realized that was so pure and real that it was more Spoonsy than anything we've done for 25 years, and by that point it was a idea good to bring new guys in.

West: What will the next single on the album be?

Deppe: There's also a really interesting song that Sandy sings called “Escape With You,” it'll probably be the next single. It's kind of unusual for the Spoons ““ there was always one song that Sandy sang on the album in the old days so we sort of stuck with tradition, but never was one of those songs a single. This will showcase the other side of the band than we have before.