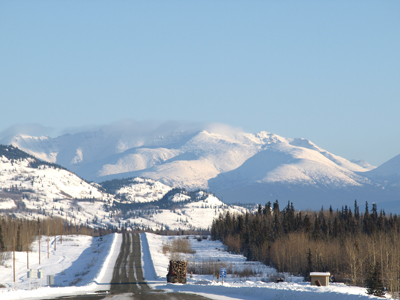 There is this thing we do in Canada: As soon as the leaves begin to turn and the temperature dips we are gripped with thoughts of the winter months ahead. How cold? How much snow? When will the freezing rain begin? How soon to change to snow tires? This obsession with winter is part of what defines us as Canadian.

When every day begins with a snap of cold that sits below zero, we moon over pictures of swaying palms. Get misty eyed at the thought of water that is not…frozen.

Perhaps it's time for a new wintertime travel mindset. Yeah, Canada is a great big freezer for a ridiculous length of time. We get that. And there are parts of this country where freeze-thaw-freeze-thaw is a tormenting pattern, making outdoor playtime a challenge. But there are some very special destinations where Jack Frost is robust in a bracing kind of way, but still makes it possible to enjoy activities that involve several layers of clothing.

So, our new cold weather travel mantra could be: Canadian winter can be your friend. This is a big country, with lots of choices. Just pick your style ““ rough or refined ““ pack your toque, slip on your Sorels, tweak your worldview and head off for the Great Canadian Wintertime Adventure.

ROUGH 'N' READY YUKON
Think of snow in the Yukon as a Halloween to Easter affair. Once a good dose falls, locals break out the sleds, snowshoes and skis, assured of primo conditions season long.

Yukon's two main cities ““ Whitehorse and Dawson City ““ plan quirky festivals and supercharged events to keep the blood pumping through the cold months. My plan was a trip filled with outdoor activities to orbit around a major draw, the annual Yukon Quest International Sled Dog Race.

The gruelling 1,600-kilometre race through the Yukon and Alaskan wilderness traces the routes followed by prospectors during the 1898 Klondike Gold Rush and from there to the Alaskan interior. It is an extreme, endurance team sport with the >> >> self-sustained unit made up of a solitary human driving a well-trained group of dogs. The race attracts mushers and teams of up to 14 dogs, spurred on by wildly enthusiastic crowds as the sleds push off in two-minute staggered starts. The minus-double-digit temperatures never deter fans that wouldn't miss a chance to cheer the mushers and dogs into the checkpoints.

“There's something different every single day you have to overcome,” said female musher Kristin Knight-Pace after she crossed the line in 2015 at the mandatory 36-hour midpoint break in historic   Dawson City. “The dogs totally made this connection with me. When we got to the jumble ice it was pretty intense but the dogs understood this is the time to wait until I tell them what to do. To have total command over 14 dogs like that was something truly awesome.”

Kristin Knight-Pace ““ and the other Yukon Quest mushers ““ has nothing to fear from me. The next day, bundled in layers, I mushed my own team of four Alaskan Huskies and a sled across the frozen surface of Fish Lake and on groomed forest trails. Outfitter Sky High Wilderness hitched my dogs in a row, provided a guide and packed snacks and hot chocolate for our midpoint thaw-out. It was cold. My eyelashes froze over. But still, despite the extreme chill, this was a transcendent Canadian experience.

I was in love with, obsessed by, the sport of dog sledding. Every day, for the full 13 days of the Yukon Quest race, I watched the team standings online and at viewpoints along the route. It was hard to think of any other Yukon experience that could grab my attention in such a way . . . until I came face-to-face with the breathtaking, stark beauty of the icefields at Kluane National Park and Reserve.

Kluane is not the sort of place you stroll into during the winter. If cost is no barrier, a smooth flight with Kluane Helicopters skims over the boreal forest, then rises into the St. Elias Mountains to an elevation of 2,600 m., a world of snow-draped peaks and glaciers. The national park is a tract of wilderness tucked into the west part of the territory, bordered by the Yukon, British Columbia and Alaska. Kluane embraces the world's largest non-polar icefields, including the immense Lowell Glacier.

We lifted off. There was chatter over the headsets as we kept an eye open for wildlife. By the time we reached heights where the green forest had given way to ice and snow, no one was breathing a word. This is the highlight of a Kluane flight ““ there are no words to capture the raw majesty of the remote, pristine, wild world  below. This landscape has not yet been ““ and one hopes never will be ““ tamed.

REFINED QUí‰BEC CITY
Not all Canadian deep winter experiences have wilderness edges. In Québec City, things tilt toward the genteel. Founded by explorer Samuel de Champlain, Québec City was once the capital of New France and the cradle of civilization in a Francophone empire that stretched all the way to Louisiana. The guarantee of snow, mixed together with the city's European architecture and joie de vivre for cuisine, music and sport, draw people from around the globe. They dream of a winter wonderland-style getaway in a city where layering, bundling and a great amount of stomping of boots to stay warm are considered part of the destination's exotic charm. Tourists from tropical, southern hemisphere countries especially love major wintertime events like the Québec Winter Carnival, a massive celebration marking its 62nd anniversary.

Over three weekends, the world's largest winter festival tugs revellers from their cosy homes and hotel rooms and onto the city's cobblestone streets to take part in some of Québec's most treasured traditions. Ice fishing, skating, tobogganing, dog sled races and horse-drawn sleigh rides all happen within the walled section of the fairy tale city UNESCO has designated a World Heritage Treasure.

The Carnival's celebrity ambassador ““ the  jolly and well-loved Bonhomme Carnaval ““ resides in an Ice Palace that takes four weeks to construct from near 300 tons of ice.

“It's like a huge Lego,” explained Daniel Bouchard, Director of Operations. “At the Carnival's beginning in the 1950's it was made from blocks of ice from the St. Lawrence River, but now more than 2,000 enormous blocks of 300 lbs. each are imported from an ice production plant in Montréal.”

With all this cold weather exertion and calories burned comes the need to refuel. To the Québécois, good dining is a religion and with such strong European ties, the city's culinary   sensibilities are very French. Romantic and elegant, Le Saint-Amour is known for foie gras and a 12,000 bottle vintage wine cellar appearing on what is one of the best wine lists in the country. A table at Le Saint-Amour is a refined gastronomic experience sought after by connoisseurs and celebrities.

Small or large, elegant or casual, the dining options in the Old City stay true to classic French roots. At the modest, relaxed Casse-Crêpe Breton, I sipped on a bowl-sized Café au Lait and watched as the chef deftly turned liquid batter into large, thin crepes wrapped around fillings of asparagus, ham and Swiss cheese. It was the perfect sit-down to strategize my shopping mission in a city known to deliver retail bliss.

The cobblestone streets of Upper Town and Lower Town are lined with art galleries, antique haunts, specialized boutiques and food shops. The small, individually owned stores are the best place to find Québec and Canadian arts and crafts like Tundra sweaters, tapestries, jewellery and jugs of maple syrup (the province produces two-thirds of the world's supply).

Now, when temperatures dally below the zero mark and the forecast is for the white stuff, my mind turns first to daydreams of a Great Canadian Wintertime Adventure. I haven't abandoned the tropics; I've just expanded my worldview to include my own backyard and will never pass up the chance to celebrate a true Canadian winter.

Getting there
Air Canada (aircanada.com) and Air North (flyairnorth.com) fly into Whitehorse with
connecting flights (Air North) to Dawson City.

Where to stay
Inn on the Lake ““ 30 minutes from Whitehorse ““ has received the nod from National Geographic Traveler as one of its Top 150 places to stay. The 15-room log inn offers a Winter Adventure package with room and meals, Aurora Borealis viewing, snowmobiling, ice fishing,  snowshoeing and tobogganing
(innonthelake.ca).

Much of Dawson City shuts down for the winter months but the spotlessly clean and welcoming Aurora Inn is walking distance to all the best sites, including the Dawson City Museum and the midpoint Yukon Quest action (aurorainn.ca).

Quebec City's Fairmont Le Chí¢teau Frontenac is one of the most photographed hotels in the world
(fairmont.com).