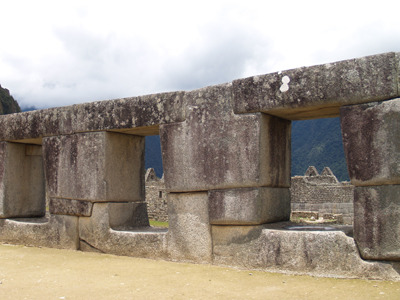 There are hummingbirds in the air, flitting from one bromeliad to the next. From my resting spot on the steep stone staircase, the rolling landscape below is a sea of greenery punctuated by low-lying puffs of cloud. In the distance, on the valley floor, a passenger train exhales a slow, lethargic whistle. Just another five minutes of climbing and I will reach the legendary lost Inca city of Machu Picchu.

“This typical cloud forest is the beginning of the Amazon jungle,” says Sonia Escobar, my guide to what is arguably the most awe-inspiring archaeological site in the Americas. “This spot is protected by many mountains. Perhaps that is why it stayed hidden for so very long.”

I've seen the photos, but I am unprepared for how the snakelike terraces, the stone ruins and the perfect mountains spread out before me as we step from the top of the staircase to the wide ridge. Machu Picchu, named one of the Seven Wonders of the World and a UNESCO World Heritage Site, feels like a city that has been reclaimed by the granite rock, as though it's not quite meant to be here. Yet at the same time I cannot imagine finding it anywhere else.

Is this how the American historian Hiram Bingham felt in 1911 when he first laid eyes on these ruins of the great Incan empire? With his discovery a can of archaeological worms was cracked wide open. Why would the Incas have settled here and why was the site suddenly abandoned?

“At that time there was just a muleback trail that followed the river,” explains Escobar. “A small boy from a local farming family guided Bingham to the site. It was completely covered in thick vegetation.”

The next year Bingham returned with a team from Yale University and the National Geographic Society. They worked at the site for five years, delicately uncovering and cataloguing artifacts from the Inca age ““ including pottery, tools and ancient human bones.

I spend the entire morning walking the wide terraces and following the pathway that winds through the tall stone structures in the urban part of the site. Despite the throngs of people that climb here each day, there's still a church-like quiet. The tour groups stick like glue to their guides, hopping from one highlight to the next ““ the Sacred Plaza, the Royal Tomb, the Temple of the Sun.

“The Incas were engineering geniuses,” Escobar says, as we cross the 15th-century terraces that did double duty: halting erosion and landslides, and providing flat, easily irrigated plots for farming corn, beans, yucca and coca plants to feed the city's residents.

The linear agricultural terraces surround what is the urban sector of Machu Picchu. It's the ruins of these buildings that are the magnet for thousands of visitors that arrive each day.

At first the buildings all look alike to me. They share the “three S's” of Inca architecture ““ simple, solid and symmetrical. Perhaps I'm not paying close enough attention ““ Escobar points out how the ruins of more than 200 buildings are divided into distinctly different sectors. There are 18 types of wall construction and the stones used to build the magnificent structures were carried in by manpower alone.

“According to ancient Inca society, towns were divided into two parts ““ the upper town which represented astronomical and religious places and the lower town which was
residential.”

Inca society worshiped the heavens, and the signs are in almost every building in the upper sector. The Temple of the Sun ““ the only building in Machu Picchu to have a rounded wall ““ is aligned to mark the exact day of the solstice.

“The Inca measured their calendar by this very building,” says Escobar. “Their calendar was divided into four parts, by the two solstice and the two equinox.”

Turning a corner we find ourselves in the Sacred Plaza where the large trapezoidal windows of the Temple of the Three Windows are an engineering testament to the Inca method of building by interlocking stones. Bingham believed that these three windows represented everyone asks. The theories are many: Perhaps the people suffered an epidemic, or a time of political unrest caused the Incas to flee. The romantic in me gravitates towards Escobar's suggestion that the Incas abandoned the city before the Spanish conquest would have a chance to discover it and destroy their buildings, water channels and sacred sites.

By early afternoon the site is too busy for my tastes and I too abandon. But one day ““ not a busy one ““ I will return.

If I stood on a gigantic map and tossed a pebble from Machu Picchu over the towering Andes, I might just be able to hit Manu National Park, a protected area of some of the most pristine rainforest in the world. For most of its history, Manu has sat quietly, tucked into the green expanse of Peru's Amazon Basin, largely overlooked by the throngs of visitors to the famous Inca ruins. the three mythological caves from which the children of the sun stepped into the world.

The mystery of why the city was abandoned still hangs in the air. It's the one question that

There's a tantalizing harmony between these two contrasting destinations. They bookend a country of extremes, but they are so close to each other that one should never be visited without making an expedition to the other.

“Peru is the most extreme country in the world,” claims Dr. Charlie Munn, a conservation biologist with an impressive track record for protecting the land and wildlife of Manu. “It boasts the world's most biologically-diverse rainforest and the world's most cultural and archaeological diversity.”

I want to feel like I'm swimming in the biodiversity at Manu. I pull on my rubber boots and grab a headlamp, to follow Munn on a one-hour hike through the jungle in search of tapirs, the largest land mammal in South America. It's early in the evening but the humidity is still as brutal as midday. Ten minutes in and my shirt drips with the humidity of the rainforest.

We're certainly not alone in the jungle. A long line of leaf cutter ants marches across our pathway, the tiny insects carrying shreds of green leaf. Miniscule tree frogs ““ the size of my baby fingernail ““ hang onto tree trunks, watching us pass.

We arrive at the observation platform, set discreetly above a stream where the tapirs are known to feed at the clay lick. I crawl under the mosquito netting and prepare for a humid wait. There's a sudden crash of branches being whipped about in the canopy. The red howler monkeys are curious and are checking out the intruders.

As dusk sets in, a rare stream caiman hunting for frogs slides along the muddy water of the stream. I've dozed off but am suddenly nudged by my guide. It's dark, and there is a full moon. The night is alive with the noises of birds, monkeys, insects and something larger, crashing through the underbrush. It's our tapir.

The stocky mammal (think large pig with a truncated elephant snout) stands at the wall of clay, licking the nutrient-rich soil. Twenty minutes later it ambles off into the bush and we pack up our gear, switch on our headlamps and prepare for the dark hike back. Along the way, the jungle comes alive in the night ““ a small black tarantula scurries across our path, a thin blunt-headed snake curls around one of the branches we brush, the ever-present tree frogs are like a trail of tiny breadcrumbs that marked our way in.

Back in my raised, thatched-roof hut at the Manu Wildlife Center, I shower, light the candle in my room and slide under the envelope of mosquito netting surrounding my bed. It's hard to fall asleep after the intense stimulation of encountering jungle life. There's a crack of thunder in the distance, soon followed by sheets of rain as a thunderstorm moves in over our lodge. Ironically, it's the thunder and lightening that quiets my mind and I find sleep.

July 24, 1911 is officially known as the Day of the Scientific Discovery of Machu Picchu. In 2011, the site marks its 100th anniversary since the discovery by Hiram Bingham.
whc.unesco.org/en/list/274
Getting there
Peru is serviced by LAN Airlines,
lan.com and by Air Canada, aircanada.ca.

Where to stay
Manu Wildlife Center is the premiere eco-lodge in the park. You'll be “roughing-it” in very comfortable raised huts with bathrooms and hot showers, but there is no air conditioning. A generator runs a few hours each day so you can recharge batteries, etc. Birders and wildlife observers come for the world's largest known tapir clay lick, and sightings of tropical birds, endangered giant otters, caiman crocodiles and monkeys. manu-wildlife-center.com, peruverde.org
Most visitors to Machu Picchu stay in the Sacred Valley and then transfer to the base of the site by train. A bus takes you from the base up to the archaeological site. Aranwa Sacred Valley Hotel is an oasis of luxury.
aranwahotels.com