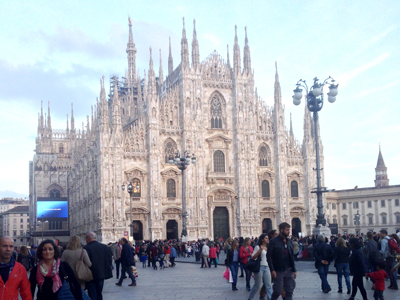 Milan is a real live city.

It is not a place purpose-built for tourists, or one remodeled and reimagined from its former self into one that serves as a tourist attraction.

Milan is one of the most populated cities in Italy, is home to the country's stock exchange and is a bustling urban centre. It is at the same time an industrial powerhouse and a living history museum. Milan is a city of new and of old; a home to grand Gothic architecture and arbiter of fashion and design.

As I arrive at the ME Il Duca ““ Melia Hotels recently opened hotel in Milan ““ I am greeted by two impeccably dressed young men. They work the door of the hotel, but could just as easily have been on their way to a job in a very well dressed law firm, or walking a runway. It's early morning, but the hotel is bustling in the quiet way hotels do, having just escorted out the last guests from Milan Fashion Week the night before.

It's a bit too early for my room to be ready, but I am quickly settled in at the hotel's lobby bar (which becomes a coffee bar in the morning) and am served the first of what will be many of the best cappucinos I have every tasted, over three days in Milan.

ME by Melií¡ is a brand extension of the Melií¡ hotel group, a handful of hotels geared towards cultured, fashionable guests  who are driven by new experiences and opportunities. The ME brand is known for its first-rate concierge service; guests can experience the best of Milan through a dedicated Aura Manager, who is devoted to making each stay unforgettable.

Neutral colours, seductive lines and modern rooms have quickly made ME Milan Il Duca a favourite for editors and models during fashion week, and celebs eager to enjoy nightlife and city views from STK and Radio Rooftop Bar.

Located on the tenth floor and accessible via an exclusive lift, Radio Rooftop bar offers panoramic views of the Milan skyline, all with a well-crafted cocktail in hand. It is the only rooftop bar in the Piazza della Repubblica area.

There are just 132 impeccably designed and detailed rooms, including 32 “Chic Suites” that boast high style, extra space ““ including a walk-in closet ““ along with a living room, lots of technology, a stunning marble bathroom, and access to the coveted ME Aura Manager.

If you decide to leave the hotel…

Duomo di Milano
No visit to Milan would be complete without some time spent exploring the Duomo di Milano and the surrounding square. If you recognize any landmark in Milan, it will be the Duomo. This is the sparkling, multi-spired Gothic creation that looks like a wedding cake topper.

Construction of this massive cathedral began in 1396.  It is the largest and most complex Gothic building in Italy, constructed of pink-veined white marble quarried from Candoglia. Construction continued on the Duomo di Milano for five centuries, and during this time artists, sculptors and architects of various styles were engaged in the project resulting in a fusion of European Gothic and Lombard tradition.

The square around the Duomo is bustling with tourists of course, but also locals going about their day, or stopping at a café. It's a must stop for photos, and offers a 360-degree look at the heart of Milan.

Galleria Vittoria Emanuele
The Galleria is a bustling combination of designer shops, restaurants and cafés and architecture that keeps your head turning. Here you will find every luxury retail brand with an impressive boutique, but it may be one of the few places in the world where you stop to admire the archways, the ceiling or the mosaic tiles you're walking on before you check out the latest Prada.  Here you'll find visitors seeking out a particular spot on the floor, at the centre of an octagon, where it is said to be good luck ritual. If you wish to return to Milan you have to place your heel on the mosaic and spin around three times. You'll have no trouble finding this spot, there is a divet worn into the floor, and always a few tourists taking a spin.

Armani/Silos
Armani/Silos opened in spring of 2015 and is dedicated to the designs of Giorgio Armani over the past 40 years.
The museum is located in a renovated building that was constructed in 1950 as a granary, hence the name Silos. The space is a sweeping 4,500 square-metres spread over four floors, and is like 40 years of haute couture runways frozen in time for an up close look.

The museum also houses a digital archive, workstations and a vast collection of photos, sketches, technical drawing and illustrations from Armani's lifetime of work.

The prominent feature of HangarBicocca is the permanent installation The Seven Heavenly Palaces by German artist Anselm Kiefer, made specifically for the site. It consists of seven towers made of reinforced concrete, each weighing 90 tonnes and varying in height between 14 and 18 metres. In addition to the permanent installations, the space also regularly hosts temporary exhibitions.

Fondazione Prada
Housed in a complex that for many years functioned as a distillery, it is now a collection of modern spaces displaying modern art. The Fondazione Prada was created in 1993 by Miuccia Prada ““ the youngest granddaughter of Mario Prada and heading the family-owned luxury goods manufacturer since 1978 ““ and her husband Patrizio Bertelli, as a platform to analyse present times through the staging of contemporary art exhibitions as well as architecture, cinema and philosophy projects.

The complex in Milan is an addition to the Fondazione's exhibition space in Venice, the Ca' Corner della Regina, a historic palazzo on the Grand Canal and hosting exhibitions since 2011.