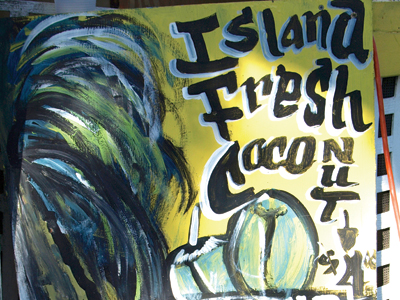 The thing is, Captain Wilson also wants me to reveal nothing. “Don't tell anyone the name of this spot,” he pleads, as he drops anchor into turquoise water so startling that it defies description.

He is the captain of the Deja Blue and the steward of the nautical chart. I am oblivious to where we are. It's another perfect cove with gin-clear waters and deserted crescents of white sand shoreline. The captain just keeps bringing them on.

My itinerary is seductive: hop between the trio of isles that make up the U.S. Virgin Islands ““ St. Thomas, St. John and St. Croix ““ immerse in a little Caribbean history, get wet and peek underneath that impossibly jewel-blue surface.”The farther away from the resorts, the healthier the reefs,” Wilson explains as we defog masks and struggle with flippers before sliding into bathtub-warm waters. And finding those secret coves is what he does best with his custom charters from Red Hook on St. Thomas. “Boat traffic. Snorkelers not briefed in proper reef etiquette. They can damage the corals.”

There's a lot of ground to cover on our half-day charter, so we reluctantly climb aboard and skip across the top of the water to our next cove ““ this one has a name attached ““ dropping anchor at Lovango Cay, a well-known snorkel and dive spot that's an image straight out of a postcard. Wherever my eyes rest there are shades of blue: turquoise, aqua marine, teal and the dark navy that indicates the deepest reaches of all. It's this collage of colours that I find mesmerizing. The sea is not a uniform place. There are depths and strange creatures and mystery.

In the water at Lovango we swim among a healthy reef of elkhorn coral, finger coral in a rainbow of hues, patches of endangered staghorn coral, lustrous pillar coral and the massive globes of brain coral. Large green sea turtles forage along the bottom and every few minutes perform an underwater ballet as they glide to the surface, snort a few deep breaths and then effortlessly glide back to the sea bottom to continue their nibbling.

The captain warns us to keep a respectful distance. “When swimmers get too close or try to grab onto the turtle's shell, it panics and gulps as it tries to get away. A panicked sea turtle can literally drown itself.”

The boat crews in the Virgin Islands have an environmental creed more pronounced than I have seen on most other islands. Climate change, shore- line erosion, pollutants entering the water system, human interaction ““ all can play havoc with the health of the Caribbean's fragile coral reefs. But a well-trained boat captain or guide has an opportunity to set the record straight and school passengers in responsible stewardship of a hypersensitive sea life under siege.

It's an environmental code that's followed to the letter by Captain Mike Klein on the sister island of St. Croix. Klein casts off his 13-metre catamaran, the Jolly Roger, from the marina at the town of Christiansted and points us toward the protected waters of the National Monument at nearby Buck Island Reef. The east end of the small, uninhabited island is renowned for the park's marked snorkelling trail.

“The incredible reefs here ““ including one of the largest stands of elkhorn coral in the world ““ are the scientific reason the underwater trail has been designated as a National Monument,” explains Klein.

Federal laws protect the coral and fish in this spot ““ even an accidental brush with a stand of staghorn or knobby finger coral can result in a penalty. So, in the water, we trail behind our guide in line formation, snaking along a large underwater loop including narrow passages between forests of elkhorn and through a coral-lined grotto to the outer edges of the reef. Hundreds of blue tang swim alongside. I can hear the parrotfish crunching on bits of coral. When the sun comes out overhead the result is magical: the colours pop off the coral, sponges, sea fans and fish.

Back on land in Christiansted, the feel of the ground under my feet is a bit of a blessing. The ocean is a magnet, but after four days on the water the horizon is playing with my senses. And the pretty town is the perfect spot to get my land legs back.

St. Croix ““ along with its two sister islands ““ lived by the trade of sugar, rum, molasses, cotton and hardwoods. In the 18th and 19th centuries, the wharfs along the waterfront of Christiansted hummed with action as large vessels were unloaded of brick ballast (many were used to construct buildings) and loaded with goods bound for Europe and New England. Until Denmark abolished slavery in 1848, Christiansted was a stop in the infamous Triangular Trade route that moved goods ““ and enslaved West Africans ““ between the Caribbean, Europe and Africa.

The influence of the Danish is felt here ““ the trio of islands was primarily under the rule of Denmark until sold to the United States in 1917 ““ from the town's orderly building lines to street signs that still bear Danish spellings to the West Indian neoclassical architecture. Many buildings boast pretty curved archways, light-splashed interiors and arcaded sidewalks to protect from sun and rain. The architectural pieÌ€ce de resistance is Fort Christiansvaern, painted a sunny yellow and positioned right at the harbour entrance to the town. Now part of the National Parks system, in its heyday the fort protected St. Croix from invasion by pirates and privateers.

Like many Caribbean islands, the USVI has experienced a flip-flop history of back and forth under ruling flags.
“Multiple European countries were in and out,” explains Brenda Sylvia, a lead guide with Virgin Islands Ecotours. We've paddled kayaks from Frenchtown Harbor at St. Thomas over to tiny Hassel Island, to take in a little history of the region and sandwich in just one more snorkel over the coral reefs. “Captain John Smith stopped here in 1606 ““ before the Danish settled here ““ on his way to ounding Jamestown. He restocked with water, timber and sea turtles. This was a big stopping  point.”

With so many ships pausing at the deep-water harbour of St. Thomas to unload and reload ““ whether it was coal or sugar or molasses ““ local businessmen saw an opportunity and tapped into the lucrative market of boat repair.

Sylvia points to a long, straight stretch of railway tracks running from the water to the remains of an imposing stone building. “This is a dry dock. When this was the St. Thomas Marine Railway, a ship would pull onto a wooden carriage on the underwater part of the tracks. Giant chains pulled the carriage out of the water and the workers would be able to repair the boat. This is the oldest remaining steam-powered marine railway anywhere in the western hemisphere, which is what makes this building so important.”

The area prospered. In the end of the 18th century, American founding father and future architect of the U.S. Constitution, Alexander Hamilton, decided the island was so wealthy that he once said, “gold moved through the streets in wheelbarrows.”

I pause, set my paddle down and think about the guides I have met, fiercely protective of both the water and land treasures of these islands. Hear that Captain Wilson? The secret of your hidden coves is safe with me.

There is no shortage of luxury accommodation in the USVI:
The Ritz-Carlton, St. Thomas,
ritzcarlton.com

Excellent guided tours are provided by:
Island Wilson Excursions, islandwilson.com who also has a float plan app available through iTunes at eFloatPlan.com