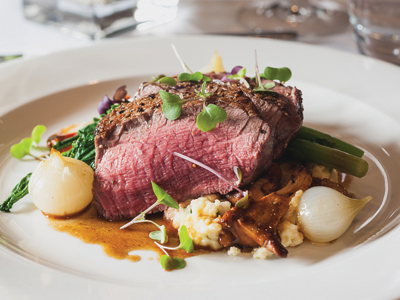 Easy to preach but hard to practice, consistency can be both the key to success and the deathblow to great brands, hallowed retailers, and crucially, restaurants. The chef's ability to serve a delicious meal night after night, while keeping customers coming back will make or break even the best restaurants.

Gordon Goss, creative food architect at Cucci restaurant in Oakville, knows a thing or two about delivering great meals each day. Goss has been at the helm of Cucci's culinary creations since it opened its doors seven years ago and with his team continues to be the driving force behind each dish, night after night.

Owner Doug Greco says Cucci was created for those who enjoy “the simple pleasures of dining,” in other words, a relaxed yet formal atmosphere with white tablecloths and a feeling of occasion. With this in mind, it's no surprise guests tend to linger for a few hours over their meal.

Live music, seven days a week, also serves to heighten the sense of occasion at Cucci. Whether it's a jazz trio, a lone pianist, or their Italian guitarist right from the Amalfi coast, Greco prides himself on Cucci's ability to deliver a different musical experience night after night. It's also the only restaurant west of Toronto, and perhaps one of a handful in the city, that offers live music every day of the week, he says.

Located at 119 Jones St. in Oakville, west of downtown, Greco says the restaurant has carved a niche for itself in the neighborhood despite naysayers who initially sloughed off his idea of a more formal dining experience in Oakville's west end.

But Cucci proved them wrong and the success of the restaurant has allowed the team to open additional establishments in the city, including Plank Restobar and Tavolo. Greco also owns The Fire Hall, a pizza, burger and wings joint, which opened eight years prior to Cucci ““ they're all under the shade of the Catch Hospitality Group, Greco's umbrella company.

However, Cucci stands as the jewel in the Catch crown.

Ingredients are sourced locally, where possible and within season, and consignment wines serve to tantalize even the most seasoned wine aficionados. At Cucci, wine is no joke ““ the restaurant has two sommeliers on staff to offer their assistance if requested and the wine cellar is stocked with more than $100,000 worth of outstanding wines.

As opposed to the “turn the tables” attitude seemingly employed by many restaurants, Cucci is about exceeding expectations and offering the little extras that make a dining experience memorable. Details like purse-hooks allow a designer handbag to perch gracefully, rather than slump on the floor. Similarly, in the summer months, patio guests are offered Cucci shawls and blankets to keep the cool lakeside breezes at bay.

If guests happen to leave the restaurant during heavy rain, the staff will offer to walk patrons to their cars with umbrellas ensuring everyone arrives dry at their destination.

Greco says the restaurant also caters to guests' dietary needs and that menu items are flexible, including substitutions like gluten-free bread, goat butter and soya milk.

In an era of rushed meals and under-appreciated culinary creations it is a relief to know such a dining experience ““ where guests can honestly relax and enjoy a meal at their own pace ““ still exists.

As Greco summed it up, “just enjoy yourself.”