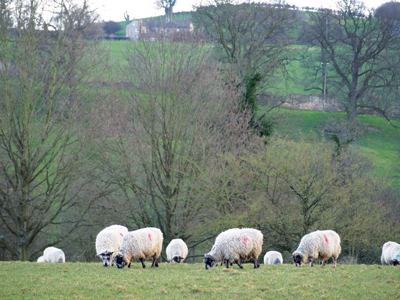 Lady Masham is eyeing my footwear. Not in that giddy Malono Blahnik kind of way. More in the your feet are going to get very wet, better change kind of way. We are heading out to partake in that most Yorkshire of activities, a Saturday afternoon ramble across the hills, dales and moorlands of her estate. I'm sent packing to the Boot Room to pick out a pair of calf-high wellies and a brown suede jacket to keep the wind at bay.

Swinton Park, as the estate is called, is largely a family enterprise, has been for more than two centuries. At the centre is the ancestral home dating back to her husband's great-great-great grandfather, Samuel Cunliffe-Lister, around the time when soaring turrets and Victorian Gothic were all the rage. The home ““ a castle, really ““ has seen a top-to-bottom renovation and a rebirth as a luxury castle hotel. Lady Masham is trained as a lawyer, her husband a geophysicist. Not a whiff of the hotelier business between them; but the pull of family roots and the almost tranquilizing effect of the landscape made the career detour an easy sell. And they chose wisely: the awards and accolades have poured in, the shift in lifestyle accomplished, and their ancestral home is back on track to be passed down to the next generation.

This part of Yorkshire bears a startling resemblance to pages from a James Herriot novel. Narrow laneways twist and turn, hemmed in by dry stonewalls and meticulously cropped hedgerows. Impossibly perfect hamlets sport at least one local pub where everyone drops by, although this isn't exactly the backwoods ““ not far from the estate there's the family-run Black Sheep microbrewery and the Yorke Arms, a Michelin-starred restaurant. The castle hotel has become a popular holiday getaway for the English, who are known for their love of the outdoors. They come for the traditional country pursuits: fishing, shooting, horseback riding, golf and, especially, walking.

The baroness is no exception ““ on this particular afternoon she's itching to escape her pile of office paperwork and fill the hours with a dose of fresh air tramping about the back forty.

Soon after we've clambered over a few fences and slid along paths left muddy by the recent rains, formal titles are shed and the baroness of the estate becomes Felicity to me.

“Can you see that line of sticks in the distance?” she asks, nodding to the north. “That's what we call a cut. The streams running down these hills are captured by that cut and the water runs all the way down to the lakes.” The River Ure and lakes of the 20,000-acre Swinton Estate are a particular source of pride ““ known for a healthy number of rainbow trout, salmon and grayling ““ and a popular catch-and-release fly fishing holiday program.

It's the pastime of walking ““ a ramble, they like to call it ““ that tugs at the outdoorsy hearts of the English. The estate has miles of footpaths cut through woodlands and along lakes lined with a splash of springtime colour when the azaleas and rhododendrons come to bloom. Low-lying wetlands lure weekend birders, heady at the chance to tick red grouse, golden plover, lapwing and merlin off their checklists. Those who want to make a full day of the trails can grab a map, pack a rucksack picnic and head into the nearby Yorkshire Dales National Park.

“Any area of land can be open to walkers ““ it's what we call a right-to-roam,” she tells me as we hop over yet another fence. “Someone can walk anywhere they want to, although in practice people usually stick to the paths because it's much easier.”

Burning calories is one thing; consuming them is another story. A part of the transformation from private castle to luxury guest property was developing Samuel's, an award-winning fine dining restaurant ““ including one of the country's top wine lists ““ and an onsite cooking school. The estate has become a destination magnet for the foodie crowd.

“The local Yorkshire producers are trying to make a go of it on the culinary front,” explains Stephen Bulmer, Chef Director at the estate's highly acclaimed Cookery School, who has worked with some of the UK's top chefs. “In the restaurant and in our classes we aim to use ingredients that are very local. We take guests out to forage ““ for morel and St. George's mushrooms, wild garlic, nettles and sweet cicely. We use Wensleydale cheese from just up the road. And, of course, we cook with the renowned forced rhubarb.”

Forced rhubarb has been something of a Yorkshire point of pride dating back to the late 1800s. And, since that time, the method of production has barely changed. Tractors have replaced the horses and carts of the 19th century but the method of growing from strong rootstock planted indoors has stayed the same.

Grown through the late months of winter, in the total darkness of long sheds, forced rhubarb has a superior flavour that has chefs clambering to include it on their menus. The plant draws from the inner energy stored in its root system rather than from the sunshine of the outdoors. The result is a tenderness that's impossible to replicate in the field grown plant.

Bulmer buys from forcing sheds ““ like the ones used at West Yorkshire grower E. Oldroyd ““ where pickers slowly harvest the rhubarb stalks using only the dim light thrown by candles. Keeping light to a  minimum ““ and only through harvest, never during the growing period ““ produces stalks that have sidestepped any thickening of fibre. The result is a stick of rhubarb that makes chefs like Bulmer swoon: the perfect mix of sweet and sharp; pink on the outside and white on the inside. As important, it is one of the few ways that Yorkshire kitchens can use fresh, locally grown produce through the depth of winter.

In both summer and fall the estate kitchen harvests from even closer to home. At the castle a four-acre walled working garden is filled with patches of seasonal fruit, vegetables and herbs for the restaurant and the cookery school, as well as flowers for the main house. There's a commitment to reducing food miles by growing and harvesting dozens of varieties including asparagus, raspberries, artichokes and blueberries. “The chefs go and help themselves,” explains Felicity. “It's just all or nothing ““ when it's ready, it's ready. When it's really fresh, you can't wait.”

Which brings me back to Chef Bulmer and the cooking school. I tie on a crisp white apron and cosy up to my cooking station. Ingredients have been chopped, measured and are spread out before the class. I am ready. The rhubarb is ready. And Yorkshire, no surprise, is as ready as ever. When it's ready, it's ready. I can't wait.

If you go
The Swinton Estate will see a major expansion in 2014 with the addition of a health club, pool and spa.
theswintonestate.com