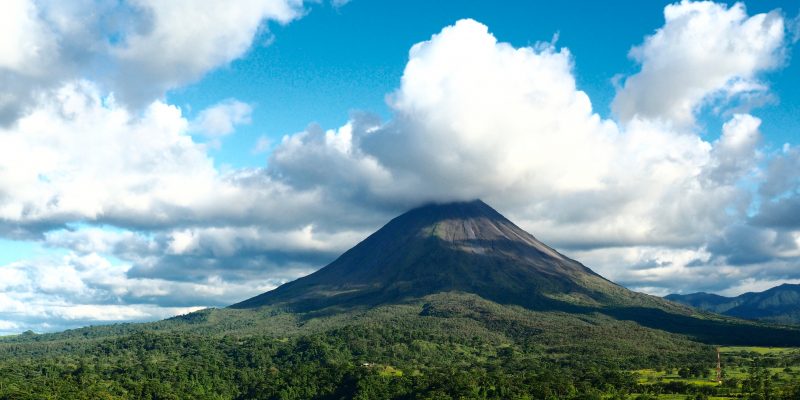 There’s a large iguana, sunning itself on the pathway to my room. He’s got a stony stare, blinks occasionally and is clearly not getting out of my way. I don’t really know much about iguanas – do they attack? – so he gets the upper hand. This is the ethos of Costa Rica: the wildlife rules.

In a country roughly the size of Nova Scotia, Costa Rica has a stunning diversity that makes it a mecca for the active outdoor traveller – mountains, rainforest, gentle foothills, miles of beachfront, 29 national parks and, just to ratchet up the excitement, four active volcanoes. Almost five per cent of the planet’s biodiversity of 500,000 species of flora and fauna are found inside its borders.

To Ryan Cruz, who has been guiding visitors to Costa Rica for more than 18 years, “That five per cent is a big number for such a small area.” Cruz has enjoyed a front row seat, watching Central America’s most vibrant ecotourism industry grow from an idea to a seedling to a world leader.

Cruz starts with a geography lesson, “Costa Rica sits an average of 650 miles north of the equator, “so the difference between the shortest and the longest days of sunlight is only 45 minutes, creating perfect conditions for biodiversity. Birds and animals also migrate through Costa Rica – the shape of the land and the mountains act like a funnel, channelling birds along the Atlantic and Pacific Flyways through the mountains and into the lowlands. We’ve counted more than 900 species of birds from warblers and hummingbirds to hawks and eagles.”

Three hundred million years ago, continental drift created the Central American isthmus (the narrow strip of land connecting North and South America). The tectonic plates smashed up against each other creating a dramatic landscape of forests folded into steep mountain ranges with wide valleys between. More than half of Costa Rica is forested while much of the lower elevations have been cultivated into banana, rice, pineapple and coffee plantations, as well as rows of cauliflower and root vegetables like sweet potatoes and carrots.

“This also creates microclimates,” explains Cruz. “The temperatures and vegetation change so much from one microclimate to another – from dry to green to lush rainforest. Rainfall can vary from 70 to 240 inches a year.”

Just as significant is the way Costa Ricans have chosen to recognize and protect their biodiversity windfall. After the national army was disbanded in 1948, the government ploughed the peace dividend into education and protection of the country’s natural resources. The clean air is thanks to the massive forest lungs plus the fact that 98 per cent of the electricity produced is from sustainable sources like hydroelectric, geothermal and wind power; hunting is outlawed as is feeding or touching the wildlife; recycling is an ingrained part of the culture; Styrofoam is banned and single-use plastics will soon follow suit. In addition, Costa Rica recently launched the #StopAnimalSelfies social media campaign with the mission to end cruel, improper and even dangerous selfies with wild animals.

“It had gotten so bad that once I saw a tourist prodding a sloth with a selfie stick just to try to get a picture,” says Cruz, shaking his head.

Spying wildlife is a bonus along the trails connecting at Mistico Arenal Hanging Bridges Park, a private reserve just outside La Fortuna, a popular hub for eco-activities like birding, hiking, thermal hot springs and zip-lining. The park has a network of well-maintained pathways connecting the long wire bridges that skirt the treetops and occasional yawning cavern below. The walkway is even wheelchair and stroller accessible, with benches to stop and listen to the rainforest sounds of birds, the gurgle of river water and the wind whispering through the forest canopy. Close by, a hog-nosed coati – the Costa Rican version of our raccoon – snuffled through the underbrush, searching for a meal of spiders, ants, lizards and bits of vegetation.

La Fortuna was just a sleepy farming village with not much happening before the 1968 eruption of the nearby Arenal Volcano kickstarted ecotourism visitation. Suddenly hotels were touting excellent views of the lava flows. These days the lava has stopped and hiking, tubing and other outdoor activities are in full swing.

I climbed atop a pedal board – a stable marriage between a stand up paddleboard and an elliptical trainer – and the guide from Pedal Board Costa Rica led us around the beautiful water ringed by the green Tilarán Mountains. Our two-hour time on the water included a swim and a land break to savour thick slices of fresh cut watermelon and pineapple. 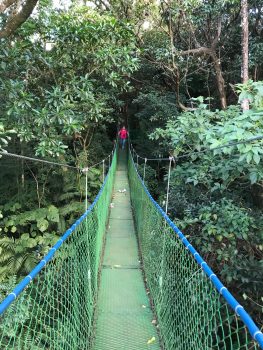 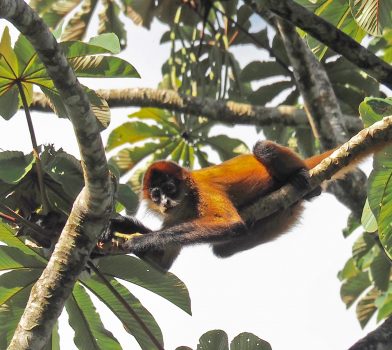 Earlier in the day, we’d snaked along a twisty rural road to the waterfalls at Bajos Del Toro in the cloud forest of the Central Mountains, once stopping to watch a troop of howler monkeys make a racket with their hoo-hoo-hoos in the trees by the roadway. It’s a steep 350 steps down to the base of the falls and a gruelling climb back up (best done a few days after arriving in the country in order to acclimatize to the elevation). Moisture-filled clouds have contributed to a lush forest of giant leaves, vines, towering ficus trees and a strata of mini ecosystems as the elevation changes. The trail is lined with red ginger, bright heliconia and bromeliads (there are more than 200 species in Costa Rica). Bright blue butterflies flit from one flower to the next.

This same ethos of protecting what is natural is at the heart of Buena Vista del Rincón, an eco-lodge and adventure centre in the hills above Liberia in the country’s northwest Guanacasta Province. On our first evening the guests gathered to watch the sun drop below the Pacific horizon, the orange glow touching the hills of Nicaragua in the distance.

Buena Vista sits on land that was once a cattle farm, but has been redesigned and repurposed to provide eco-experiences for both lodge guests and day trippers from Liberia and the coastal resorts. It’s a forward-thinking property with advanced systems to deal with compost and domestic waste, processing and recycling much of it back into irrigation for the vegetable crops used in the four restaurants.

There’s a dizzying checklist of activities: zip-lining routes for both beginners and extreme adrenaline warriors; a series of connected hanging suspension bridges zigzagging down the mountainside; a high speed, half-kilometre waterslide channel running through the leafy jungle; guided horseback riding; hot thermal pools for soaking (complete with volcanic mud for smearing on body parts); and a cultural experience with tastings of Costa Rican coffee, local moonshine, sugar water and traditional baking like cornbread.

In a country peppered with spectacular waterfalls, Buena Vista boasts its own cascading roar of water. It’s a two-hour hike from the main lodge or a tractor-pulled wagon shuttles visitors to a drop off point for the short walk to the base of the waterfall. Despite several busloads of visitors to the property, the trails to the waterfall were deserted and quiet. In the canopy above I could see the occasional branch sway – more monkeys perhaps?

Muscles stretched and camera card full from my hike, I head back to my cottage room at the lodge. The iguana and I seem to have struck a truce. He doesn’t attack me and I give him a wide berth, gingerly stepping out of his way. All’s well in the rainforest of Costa Rica. The wildlife is blissed, and so am I.