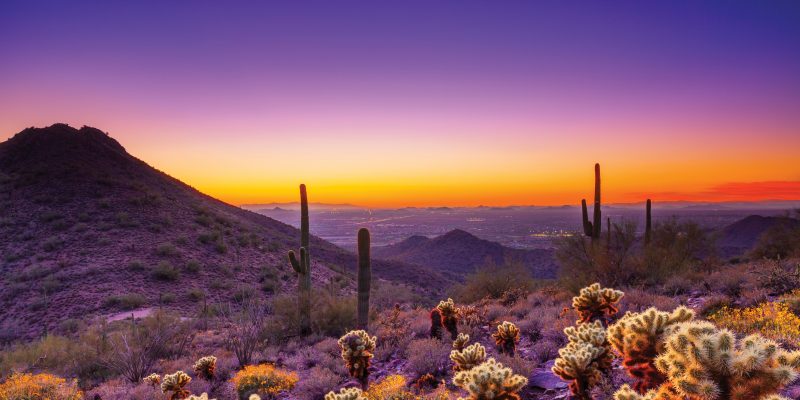 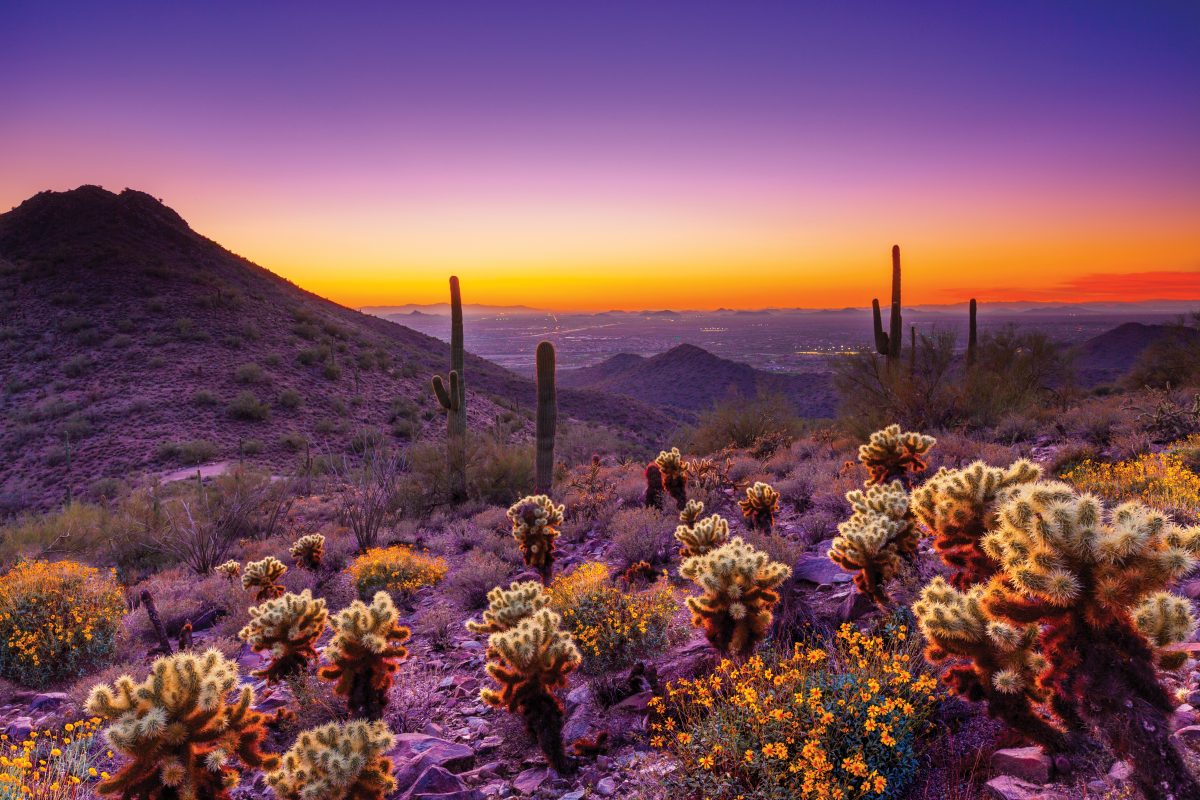 An idyllic destination for active and arts-minded travellers

Look between the sagebrush and multi-armed saguaro cactus to discover the Arizona desert is a remarkably colourful garden in spring, with cactus tops crowned in brilliant fuchsia blossoms and orangeade-coloured blooms trailing across thorny bushes.

The seasonal floral show on a morning hike along the Gateway Loop in the McDowell Sonoran Preserve in Scottsdale AZ wasn’t the last time I’d encounter the unexpected in this small desert city.

But Scottsdale is also a place for active and arts-minded travellers to explore architecture and history. There’s creative food and drink, including a chance to try Arizona wines at one of a number of Old Town Scottsdale’s tasting rooms.

“People are gobsmacked when they see how lush our Sonoran Desert is,” says Keeley Ast of the boutique Hermosa Inn.

The hotel has classic old-West style as the circa-1930s former home and studio of celebrated American cowboy artist, Lon Megargee. It’s situated in a quiet residential area of Scottsdale neighbour Paradise Valley and has casita-style rooms, many with fireplaces, and flower-filled gardens. Some rooms have a view of Camelback Mountain, the popular hiking spot that looks like a deflated dromedary.

Megargee’s rustic paintings were inspired by cowboy lore. “Home on the Ranch” depicts a buckaroo, still wearing his 10-gallon hat, scrubbing up in the bathtub. A curious horse pokes its head through the window.

The hotel has a considerable collection of Megargee’s original paintings and sketches in the lobby and around Lon’s dining room. A “Home on the Ranch,” print was hanging over the deep soaker tub in my casita. Inspired, I did the same as the cowboy, minus the hat and horse.

Something I never expected to do in the desert was kayak. A trip along the Lower Salt River in the Tonto National Forest on a tour with Arizona Outback Adventures goes past scrubby green mesquite trees and red-brown mountain ranges. The river route started out with some fast-moving water, then eased into a lazy paddle, the better to spot a couple of wild horses from the state-protected herd coming down to the river to drink.

The horses didn’t mind the kayakers and I was thrilled to see them so close.

I was pretty horse crazy when I was a kid. Decades beyond dreaming of being Dale Evans, I hadn’t been in the saddle in years. The thought made me anxious. Could I manage to get on a horse and stay there?

But then, how could I visit the American West and not experience some cowgirl culture?

MacDonald’s Ranch in Scottsdale had sturdy steps to ease the way onto the back of a laid-back, dark chestnut horse. A guide checked my helmet and stirrups, assuring me I was more than up to the gentle ride. A cowboy led the small group along an easy route through the Sonoran Desert, past candelabra-armed saguaro cactus. It felt just like being in a movie Western.

Riding the trail worked up an appetite. Postino Highland WineCafe has a solid wines-by-the-glass list and a dozen versions of bruschetta to mix and match. The restaurant is in the former Valley National Bank branch, a mid-century building designed by architect Frank Henry, who apprenticed under celebrated American architect Frank Lloyd Wright.

Wright had strong ties to Scottsdale. He began work on Taliesin West, his winter home and studio, in the 1930s in the desert foothills of the McDowell Mountains. A tour reveals Wright’s creative genius and signature organic architecture style that ensures buildings appear to be a natural part of the landscape.

“Taliesin West is a look over the rim of the world,” Wright wrote in 1943. The 60-minute Insights Tour, led by an impressively knowledgeable docent, included areas where Wright lived, including the expansive Garden Room living room with its Wright-designed furniture. Apprentice architects still study here.

I’d hiked, ridden and kayaked. To get another view of the Sonoran Desert, you’ve got to get up early, but it’s worth it to step into the basket of a colourful hot air balloon from Rainbow Ryders and slowly slip up into the calm dawn sky.

On my first ride in a hot air balloon, I was surprised by the silence as we gently floated up and across mountains, trails, residential areas and the desert. The pilot nailed the landing with only a single bump as we came back to earth celebrate with pre-breakfast sparkling wine and orange juice.

We swapped natural beauty for artistic inspiration at Scottsdale’s Old Town Arts District weekly art crawl. Held each Thursday evening, it’s been going on for more than 40 years and includes public art and about 70 galleries.

Old Town also has a number of wine-tasting bars that spotlight locally grown wines. I was especially taken with Merkin Vineyards and Caduceus Cellars, learning about Arizona wines as we sipped. Winemaker-owner Maynard James Keenan, frontman for metal band Tool, wasn’t in the house, but I still got a good story while tasting Merkin Chupacabra red blend. The blood-sucking chupacabra is a creature that may, or may not, exist. As for the winery name? Best you Google merkin.

I was really taken with Craftsman Court in Old Scottsdale, a group of mid-century Western contemporary buildings housing retail and restaurants and built around a pleasant central courtyard.

I had my best meal in Scottsdale at FnB Restaurant in Craftsman Court. Fresh local vegetables prepared in creative ways take centre stage, alongside meats and fish, thanks to extraordinarily creative chef and co-owner Charleen Badman. Named James Beard Awards Best Chef of the Southwest in 2019, it’s no wonder she’s known as “the veggie whisperer.”

Scottsdale weather can be lovely in winter, early spring and late fall, but temperatures spike during the late spring to September, where 40C days are common. Early morning is the best time for activities and many patios have shade and misters.

Or you could go to the cooling cocktail route. A Scottsdale favourite is a refreshing, bright red margarita made from tequila, lime and the watermelon-like juice from the fruit of the prickly pear cactus, all buzzed with plenty of ice.

A cocktail from a cactus? In Scottdale, I’m not surprised.

Linda Barnard was hosted by Experience Scottsdale, which did not preview this story.

For more information on Scottsdale, go to experiencescottsdale.com.

Scottsdale is about a 15-minute drive from Phoenix Sky Harbor International Airport. Air Canada and WestJet have regular service from Canadian cities.

Hyatt Regency Scottsdale Resort & Spa is a family resort with 2.5-acre water playground. Fridays at the Hyatt afternoon programs are temporarily suspended due to the pandemic. Check with the hotel to see when dancing, drumming and storytelling by local Native American cultural guides and performers resume. The hotel also has a Native American learning centre with displays, photos and artifacts.

The Hermosa Inn has an online-only Loonie Love rate for Canadians, with a fourth night free. Offer code “Loonie” must be used when booking.

Newly opened ADERO Scottsdale, Autograph Collection hotel overlooks the Sonoran Desert and lists stargazing among its activities as the region’s only resort in a certified Dark Sky Community.