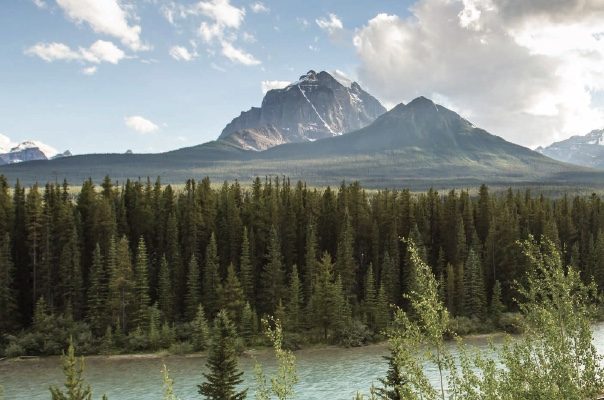 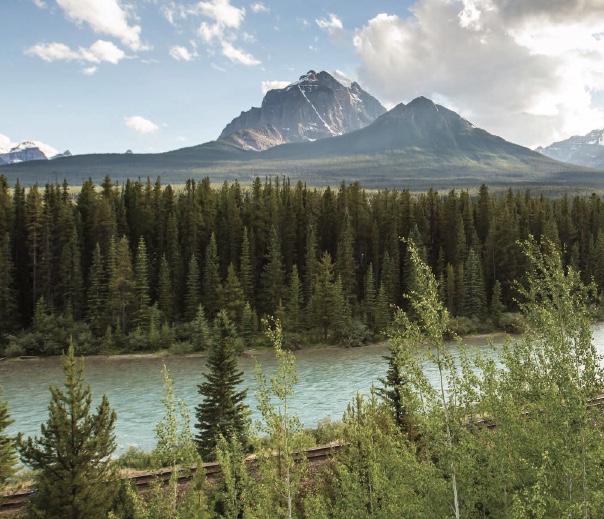 Rob McClintock paid for a seat on the Rocky Mountaineer luxury train, but he barely used it. The self-described train nerd from Sarnia, was eager to make up for the two-year pandemic postponement on his 50th birthday dream trip with his wife Alicia. He spent most of the two-day journey through British Columbia and Alberta to the Rockies taking photographs from the open-air viewing platform at the back of the coach, revelling in the motion of the train beneath his feet.

A railway lover since he was a toddler, McClintock was thrilled by the scenery and the historic route, including when the Rocky Mountaineer slowed to pass Craigellachie. The home of the symbolic last spike marks where east and west railways met in 1885, opening British Columbia to tourism and commerce. For 80-year-old Wayne Detcher of Toronto, the Rocky Mountaineer took him back 65 years, to when he was a 16-year-old working on Canadian Pacific Railroad dining cars. Back then, chefs cut lamb chops from swinging hanging racks in a cooler and the old coal-fi red engine had to be in motion to get the stoves working. 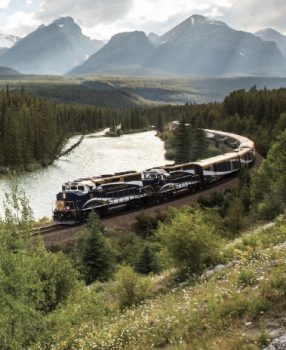 “We shovelled coal to cook the eggs,” he says. “It brings back a lot of memories.” For me, who never says no to pampering, mountain views and a good meal, the idea of travelling in the spirit of days long-past with a seat in the dining car was irresistible. I carried with me images of romance and adventure from wistful songs and movie scenes set on foggy platforms. Urged on the station master’s call of, “All aboard!” in the Rocky Mountaineer’s Vancouver Station (the Canadian company is privately owned and has its own terminal), more than 500 passengers from the U.S., Australia, Europe and Canada crossed red carpets to board the train’s midnight blue and gold carriages.

Onboard Host Tyler D’Souza, 29 – who turned out to be a master storyteller and knowledgeable historian – waited for us on the open-sided viewing platform on our GoldLeaf Service coach. Like McClintock discovered, it would become a favourite photo spot for many of us, a way to get even closer to the astonishing scenery or to grab the classic picture of the train cars rounding curves ahead of us.

We were on the First Passage to the West route, which takes the historic nation-building journey of the railway into the Rockies. The train passes through the traditional territories of many Indigenous Nations, following the path of gold rush hopefuls, explorers and fur traders. I’d driven the Vancouver-to-Banff route in fall 2020. This time, I didn’t have to keep my eyes on the road with this unhurried and relaxed way to travel. With spotty Wi-Fi on board, there was no email to check or work to do. Our job was to crack a book, drift off, or watch the ever changing scenery and look for wildlife.

We’d also eat very well. Kaelhub Cudmore, newly appointed executive chef of Canadian operations, was in the kitchen for the first day of our journey. The Vancouver Island native is keeping the focus on locally sourced ingredients with bright, fresh flavours and dishes that reflect the places we’re travelling. Often described as among the world’s best train experiences, the first of two days on the First Passage to the West route would take us from urban Vancouver through Fraser Valley farmland and along the rushing Fraser River to the sagebrush dotted semi-desert and Kamloops where we’d spend the night in a hotel.

The fact people don’t sleep on the train, like they do with VIA Rail’s transcontinental Canadian, may be a surprise. This Rocky Mountaineer is designed to maximize daylight travel, so we bed down in town. Room keys are handed out on the train. Passengers are bused to and from hotels. We brought only what we needed for the day on board. Our luggage was trucked to the hotel and was waiting in our rooms on arrival. There are two levels of service — GoldLeaf and SilverLeaf. Both include all meals and drinks, including B.C. wines, as well as cocktails and local beers.

SilverLeaf coaches are single-level cars with oversized windows. Like GoldLeaf coaches, they’re 25 metres long — about half the length of an Olympic-sized swimming pool. Meals are served to your reclining seat, with fewer choices than GoldLeaf menus. The rear viewing platform can accommodate two people at a time. Two Onboard Hosts, who are a mix of storytellers, historians, servers, walking encyclopedias and entertainers, provide the same services as in the two-level GoldLeaf coaches. 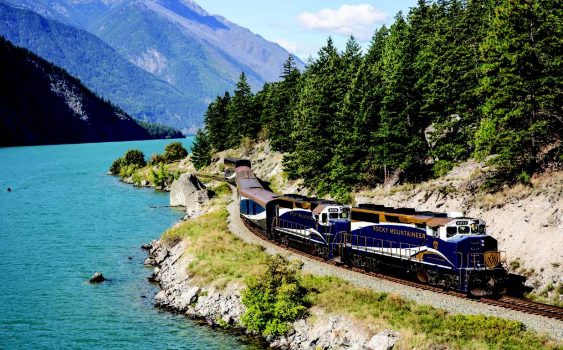 GoldLeaf coaches have up to four Onboard Hosts and three culinary team members in the kitchen off the 36-seat dining room on the main floor. I was excited to be having breakfasts and three-course lunches here, seated at a table covered in white linen. I’d always wanted to eat in a dining car and never had, unless you count a bag of chips and a beer in the old bar car on the Toronto to London, train three decades ago. There are two seatings for meals and a choice of up to seven made-to-order entrees. Breakfast selections included pancakes, cheese and spinach soufflé and eggs Benedict, as well as delicious croissants imported frozen from France and warmed to crispness on board. Lunch began with a charcuterie appetizer board with smoked Alberta bison sausage, followed by seven choices for mains including Alberta striploin, Lois Lake steelhead salmon, seven-grain power bowl, risotto and a massive pork chop on the bone.

Dessert one day was baked cheesecake with Okanagan fruit compote and apple gallette with ice cream the next. Vegetarians and vegans in our group ate just as well, with custom desserts and dishes like thinly sliced smoked carrot that tasted just like smoked salmon. Nobody goes hungry. A pre-breakfast pastry and coffee is served to passengers who opt for the later breakfast seating. Hosts deliver sweet and savoury snacks to your seat. And the bar opens at 10 a.m. for a Caesar or hot chocolate with Baileys Irish Cream to start the day. 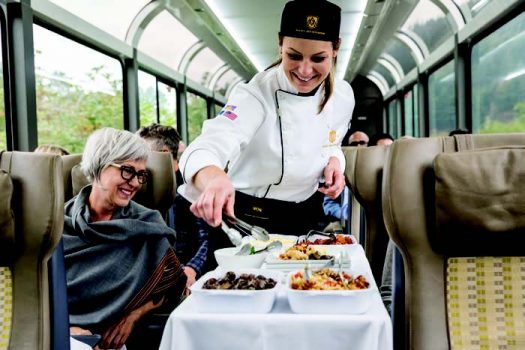 I was impressed with how often the two large bathrooms were cleaned on our journey. The train was kept spotless. There’s no smoking on board. Hosts have nicotine gum to ease cravings on the 10-hour journeys, as well as ginger chews for motion sickness and a variety of first aid items. Our private world of mountain views and hospitality was at the top of a curved staircase in the dome-topped GoldLeaf coach. It felt spacious, thanks to the curved panoramic window ceiling, broken only by a strip of blonde wood down the middle for lighting. There’s a pair of large reclining composite leather seats with adjustable warmers (they also pivot for groups of four) on each side of the aisle and an open service galley.

What’s the best side to sit on, I asked D’Souza. “The answer is both,” he says. “The reality of building a railway through all of these areas is sometimes you’ll have to cross a bridge. And then all of a sudden, what you may have been interested in on the right-hand side is now right there on your left.” The train travels at an average speed of 50 km/hr and often slows for photo opportunities. The Mile Post newspaper in the seat pocket lets me know what I was seeing and what’s ahead, along with stories, history, maps, routes, the best photo spots and fun facts, like the failed experiment to use grouchy Bactrian camels as gold rush pack animals in the interior.

D’Souza included Indigenous place names and history in many of his explanations when he took the microphone to tell us stories about people, the past and wildlife. As we approached Hell’s Gate Canyon, where steep rock walls frame the churning Fraser River below, he invited us to imagine explorers coming around the bend in the river in birchbark canoes and seeing this heart-stopping sight. I made sure I was on the viewing platform as the train crossed the arched Cisco Crossing bridge over the Fraser, orange struts flying past, the clicking of the train loud on the tracks.

At Lytton, our excited chatter about the views quieted as we saw the devastation from the wildfires that destroyed the town last summer. It was one of several instances where we stopped to think about where we were on this trip, including D’Souza’s stories about the toll on Chinese workers who build the railway. “As we continue on through our day and we get to take in so many beautiful lands, just do remember this was others’ land long before ours,” he says. “In some ways, the building of the railway is still a tangible symbol of that colonial history that Canada does have and needs to grapple with.”

We spotted eagles, big horn sheep, elk and a coyote as we travelled. The train crew radioed the hosts to let us know about wildlife sightings to come and we’d jump to look out the windows with each: “Bear on the left!” At the town of Canoe, we waved back at Doris and her dog. She’s been greeting Rocky Mountaineer passengers with two-handed waves from the porch of her yellow house for years. We continued through Revelstoke and the Columbia Mountains, on to the Continental Divide and the Rockies, feeling the sway and occasional bump of the coach as we went. I put on my coat to stand on the outdoor platform to smell wet cedar, the season’s first flowers and the mineral dampness inside tunnels.

Of the seven rivers we crossed, the churning, tumbling Kicking Horse was the most dramatically beautiful, the pale turquoise colour caused by glacial rock flour. The massive, snow-capped Rockies seemed to surround the train as we approached the Spiral Tunnels, built in 1907 to let trains make the climb up “the big hill.” The train climbs and turns imperceptibly in the inky dark as it travels through Cathedral Mountain and Mount Ogden. The proof of what happened comes when we emerge into daylight to discover the mountains appeared to have changed places.

It was starting to snow as we pulled into the heritage Lake Louise station to let some passengers off. The carriage felt cozy. There was time for one last indulgence before we reached the end of our journey in Banff: a mug of milky coffee laced with Grand Marnier to go with the warm fresh-baked cookie delivered to our seats by sous chef Jo.

We’d been cautioned about “train legs,” the wobbles that could follow a long day on the rails. I felt it that night as I lay in bed, replaying memories of mountains, rushing rivers, wildlife and new friends made on the journey as I drifted off to sleep, feeling the gentle phantom sway of the Rocky Mountaineer lulling me to sleep.

More on the Rocky Mountaineer:

Linda Barnard was a guest of Rocky Mountaineer, which did not preview this story.