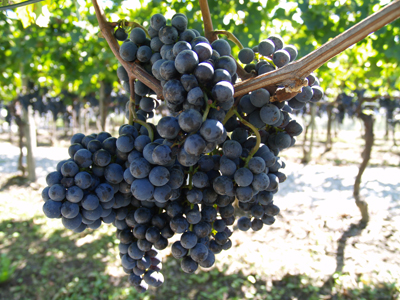 Just tearing myself away from the Alps is a bit of an accomplishment. Those seductive peaks ““ the symbols of an entire country ““ fade from my grasp as the train streams southward. Snowy pinnacles are replaced by tidy rows of vineyards, cocooned in a near-perfect silence that's punctuated only by the bells of a village clock tower. The conversations surrounding me take on a sensuous vibrancy as passengers get on and off my coach and the language shifts from German to Italian.

This, you see, is Ticino. A mingling of two cultures, creating one perfect union as the sober efficiency of the Swiss is pollinated by “La Dolce Vita,” an Italian lust for life. Stretching from the Rhí´ne River valley all the way to Chiasso at the border with Italy, Ticino is a place of pilgrimage for lovers of earthy flavours, authentic ingredients and robust wines. And the result is a feast for the senses: vivacious, colourful, sumptuous and delicious. Mostly delicious.

Life wasn't always this way in Ticino. Until the middle of the last century, this was a poor area; food was scarce and the humble chestnut was the bread and the meat of the people. When a child was born, a chestnut tree was planted to ensure there would be some food for all. Times were very difficult. Many people left.

But over the past 50 years, in this oft-overlooked canton of Switzerland, there's been a dramatic turnaround, fuelled by an explosion in artisan food producers and led by hillsides of fruitful vineyards.

Ticino has become a region of agriculture and farmers, markets and craft wineries, food festivals and celebrations where the locals meet to swirl a glass of Merlot and debate the merits of one risotto dish over another. The rolling hills and wide, green valleys are now peppered with luxurious country inns and small-scale vintners that bottle the Ticinese specialities, Merlot, Cabernet Franc and Bondola.

The Chestnut Path
The softness is what I first notice ““ the way our footsteps along the pathway seem hushed and the greenery of the hillsides is muted. These groves of chestnut trees along the Sentiero del Castagno ““ Chestnut Path ““ were planted before the First World War. The occasional tribe of goats share our walkway, bells a-clanging around their necks, nibbling at the bushes that line the path. The 15-km route passes through five very traditional villages ““ the people who live here today fill their shelves with a cornucopia of foodstuff, but their ancestors were dependent on the chestnuts that grew in the groves.

“The chestnut tree was brought here by the Romans, and to us it is a holy tree,” says Marina Guzman, a local guide who lives in the region. “Each tree produces about 150-kilograms of fruit . . . and that's what one person needed to survive the whole winter. Every fifth tree you see in Ticino is a chestnut tree. The gathering, drying and eating of chestnuts is such an important part of our heritage, that each fall people still collect the fruit and dry it in the traditional manner ““ above a long-smouldering fire in the grí , a small stone building built just for this purpose.”

A renewed reverence for the lowly chestnut is just the tip of Ticino's culinary revival. A gastronomic revolution of sorts began in the late 1960s, along with a shift to wellness and a focus on good living. Over and over again, I hear this mantra: “We eat what is produced here ““ zero kilometres. We eat meat, cheese, vegetables and wine that are made here in Ticino.”

What translates onto diners' plates is an epiphany. Chefs whisk and sauté their way into a new culinary frontier ““ one far from the long, difficult winter of the chestnut. Now just steps from the kitchen door there are bushes of fragrant rosemary, olive trees and vines heavy with plump Merlot grapes.

In the kitchen at Fattoria L'Amorosa, a traditional inn on the outskirts of the market-town of Bellinzona, the young chef coaxes nuances and flavours from ingredients like smooth, aromatic grappa, herbs from the garden, housemade balsamic vinegar and tender beef from the inn's small herd of cattle.

“This inn and restaurant are owned by a gentleman who is one of the most famous winemakers in Ticino,” boasts my waiter. “So, his knowledge influences the dishes we prepare. The menu changes every day, but the focus is always on the traditional dishes of the canton.”

It's the same at every grotto ““ small, countrystyle restaurant ““ I visit. Everywhere there is risotto, the creamy rice dish so often associated with northern Italy. Prepared with fragrant herbs, earthy mushrooms, spicy sausage, or simply topped with shaved Parmesan, risotto is like the chameleon of the dinner plate ““ add a little variety to the rice base and it's like “same dish, different taste.”

At the delta of the River Maggia, spitting distance from the inn, are the only rice fields in Switzerland, and the northernmost rice farms in all of Europe. A long, gravel drive leads to Terreni alla Maggia, an organic farm where the soil and Mediterranean climate are perfect for growing both grapes and rice. Here they grow Loto, a regional variety of rice that thrives in dry ground rather than in traditional watery terraces. Loto is thinner than Arborio (the short grain commonly used for risotto) and is prized by cooks because it does not boil away, so can be used for everything from risottos and soups to hearty side dishes.
In the southernmost point of the canton, Merlot rules
The Merlot grape could be dubbed Ticino's saviour crop. And nowhere in the canton is it more important than in the narrow point below Lake Lugano, centred in Mendrisio, a small city steeped in the architecture of the Middle Ages.

“The region of Mendrisiotto is the centre of Merlot in Ticino,” Nadia Fontana-Lupi, my host in the city explains, as she swirls her glass of deep berry-coloured Merlot. “The surroundings are perfect for red wine ““ the weather, earth, sun, high humidity and the southerly position.”

Every September, at the time of the grape harvest, Mendrisio shakes off its work clothes for the annual Grape Festival, an important occasion when the locals take a break from weeks of tending to the vines to celebrate the making of the wine. The cobblestone courtyards and narrow medieval laneways are filled with stands that sell tastes of salami, pastries, roasted chestnuts and local wines. Almost half of the Merlot produced in Ticino comes from this small corner of the canton.

And with it has come a revival. People still pay homage to the chestnut ““ just as they honour the newer crops of rice and grapes ““ but they recognize this new diversity has brought with it a quality of life and stable economy that their ancestors could never have imagined.

“Today even producers and farmers can become rich people,” says Nadia. “There is a new way of living ““ it's very good for us and for the
next generation.”

If you go
Air Canada (aircanada.com) and Swiss (swiss.com) offer flights from Toronto and Montreal to Geneva and Zurich.

Swiss Rail connects all regions of the country with cities and towns in Ticino.
swisstravelsystem.com