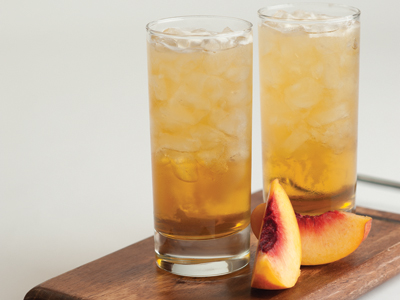 “Without the female drinker, a lot of cocktails wouldn't have been invented,” says Trevor Burnett, co-owner of Tipicular Fixin's, a Toronto-based mixology, cocktail and entertaining consulting company. Burnett, along with his business partner Whitney Munro, will be making an appearance at West of the City's Girl's Night Out on November 24 at the Oakville Conference Centre.

Appropriate too, considering we have women to thank for colourful combinations of libations. During prohibition, when illegal Speakeasies couldn't afford to turn away business, operators opened their doors (and bottles) liberally to women whose refined palates reacted to the rough taste of crude homemade moonshine. Many asked for sugar or bitters to be added to the bathtub swill, thus creating preliminary versions of the Mojito, Manhattan, and Mint Julep we love today. So for all those who thought the poster boy for spirited sophistication was originally Bond, you might have to concede that title to the ladies of Sex and the City (or others like them).

Despite all the cleverly named options listed in lounge menus, a good cocktail doesn't have to be, nor should it be, complicated. What mixologists (once known as bartenders) are currently blending, shaking and stirring up isn't necessarily what people are opting to create at home, Burnett says. The trends in home entertainment this season fall on the side of simplicity rather than spectacle. “The key to being a great bartender,” he says, “is not how many recipes you've memorized, but whether you can balance a cocktail correctly.”

He says there are four components to a good cocktail: a spirit (obviously), water (such as tonic), a citrus element (such as lime), and a sweet (such as bitters). “A good cocktail is simplicity in a glass,” Burnett says. “Hit all four elements (five ingredients maximum) and you've got a good combination. Like a great food recipe, it's all about a balance of flavours.” He cites the classic 100-year-old martini as the ultimate cocktail. “I know I don't want to complicate my life any more than it already is,” he says. Why do so at the bar?

However, adding an edge of interest to any classic concoction isn't out of the question ““ especially if that surprise is locally grown, produced or harvested. Yes, the local, local, local trend has hit the bar menu too, and that's part of what Tipicular Fixin's is also about ““ seasonal ingredients sourced from nearby farms. If you've been following food trends (and who hasn't?) this one should ring loud and familiar.

For a touch of personality in his martinis, Burnett adds pickled wild leeks instead of olives or onions. Or he suggests dropping Ontario cranberries into any cocktail that traditionally calls for a tart lemon or lime flavour.Burnett and Munro turn fruit into syrups that can be kept all year.

Think local, combine seasonal ingredients such as fruits, herbs and even some vegetables in a glass with regionally distilled liqueur and you're not only eating local, but drinking local too. And that's where Oakville-based TAG Vodka enters the equation.

Maverick Distillery opened in 2009 with the goal of producing a quality Canadian Vodka at an affordable price. TAG No. 5 Vodka was the resulting product, filtered five times through Canadian white birch charcoal and distilled from locally grown peaches and cream corn. According to the company, “blind taste tests conducted by third party research consistently ranked TAG as the clear preference over leading brands such as Grey Goose, Absolut and Smirnoff.”

This company has partnered with Tipicular Fixin's pair of creative cocktail consultants to promote TAG at upcoming events and tradeshows. For those purists who think vodka and potatoes go together like Champagne and France… well, you're not entirely right. Sure, Russian vodkas have a history and high standards, but the potato rule has been misconstrued, according to Burnett. “Vodka is a regional spirit traditionally distilled from what's in abundance nearby,” he says, “potatoes, winter wheat, corn and even coconut. Vodka can be made from just about anything. And in Ontario, it can even be gluten free.”

So whether it is vodka, gin, rye, rum or even sake (also now distilled in Ontario), shaking it up at home with friends and family instead of going out is  forecasted for this holiday season. And what do you do if a four to five ingredient cocktail is too time consuming to serve guests, or if a hiring a dedicated bartender isn't practical? Fill a punch bowl, Munro advises.

Haul out grandma's crystal punch bowl this New Year's Eve and you'll be ahead of the curve. Munro predicts that by this time next year punch will be the new wine at all types of parties. “It's communal, easy, and fun,” she says. “Plus the bowl, especially if it's vintage, makes a great decorative accessory on a buffet table or bar top.” You also don't need a dedicated server, but Munro cautions it is difficult to monitor each guest's alcohol intake. “It can really sneak up on you,” she says, “because in a punch the taste of the alcohol is hidden.”

Preparing a big bowl of unpretentious party fun is easy, however. Loosely follow a cocktail recipe, pour ingredients into a bowl and continue tasting until you are satisfied with the results. Then garnish with frozen fruit instead of ice, because melting cubes will water down the punch during the evening. Glasses too can be almost any shape and size, so pull out the entire set and line them up.

See it Live!
TAG No. 5 Vodka will be sampling their premium vodka at West of the City's annual holiday Girls Night Out on Thursday, November 24 at the Oakville Conference Centre. Trevor Burnett of Tipicular Fixin's will be onstage to demo how to create your own creative cocktails. Tickets are $15 and available at the door. For more information visit www.westofthecity.com