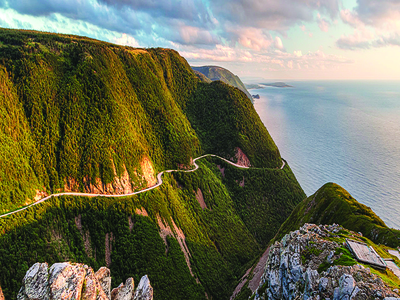 Of course, visiting the Rocky Mountains, watching a rodeo at the Calgary Stampede, touring the CN Tower and hanging out at Peggy’s Cove are all incredible experiences, but we thought we’d share a few, less conventional adventures that will, without a doubt, make you appreciate our beautiful country even more.

Visit Haida Gwaii in BC

The serenity and cultural richness of Haida Gwaii make it a one-of-a kind, unforgettable destination. Formerly known as the Queen Charlotte Islands, or the Charlottes, the name Haida Gwaii means “Islands of the People.” The area consists of more than 150 islands of varying sizes and is the most remote archipelago in Canada. Experience the incredible raw beauty of the island’s parks at Gwaii Haanas National Park Reserve & Haida Heritage Site and the SGang Gwaay UNESCO World Heritage Site, one of the last authentic examples of a west coast First Nations village.

Many people, Canadians included, don’t know that we have our own Dead Sea – in the heart of the prairies! Little Manitou Lake, near Watrous, Saskatchewan, is the largest saltwater lake in the country (and one of a handful in North America), and while it carries a lower salinity, it’s comparable to the Dead Sea and the Karlovy Vary hot springs in the Czech Republic. Little Manitou Lake waters have a higher mineral content than any in the ocean and are known for their healing qualities. Located halfway between Regina and Saskatoon, Little Manitou Lake stretches 14 miles long by a mile wide. The area boasts a resurrected resort, the Manitou Springs Resort and Mineral Spa – with its brownish water pools in four different temperatures – campgrounds and other attractions related to the legendary lake.

Churchill, Manitoba is one of the few human settlements where polar bears can be observed in the wild. Thousands of visitors from around the world gather each fall for the primal excitement of seeing these magnificent animals. Best viewing times are in October and November, when the bears begin their move from their summer habitat on the tundra back to their seal-hunting turf – the pack ice that forms every winter over Hudson Bay. Various outfitters offer around-the-clock wildlife viewing, daily excursions, and warm, comfortable lodgings in the middle of the vast tundra.

Motorbike around Lake Superior in Ontario

Driving the shoreline of Lake Superior is a world-renowned journey… especially by motorcycle. The vastness of the world’s largest freshwater lake, surrounding by majestic, awe-inspiring, pristine wilderness, is an experience not to be missed. Truly, Lake Superior is so large that it’s more like a crystal clean inland sea, where varied shorelines can range from sandy beaches to towering bluffs.

There are several predetermined guided routes you can choose from. The Ride Lake Superior route, meant for motorcycle enthusiasts, takes you as close to the shoreline as possible while remaining on pavement. Choose the ready-made 8-day itinerary or customize your own using a list of accommodations and attractions or an interactive route planner. Note: This route is best experienced in a clockwise rotation.

Did you know that Quebec City has a waterfall that’s taller than Niagara? And did you know it freezes over every winter? And did you know you could climb it when it does? Ice-climbing is a unique experience that help you forget the cold of winter and motivate you to get outside. The main falls at Quebec’s internationally renowned Parc de la Chute-Montmorency Montmorency are 361 feet high (taller than Niagara’s 262 feet); and in the Charlevoix region, Parc d’Aventure en montagne Les Palissades offers more than 36 ice climbing routes, from 33 to 1,312 feet long. You don’t need any experience with rock climbing to try ice climbing but you will need to know what you’re doing. Either go with a very experienced friend who can rig up a top-rope on easy climbs for you, or hire a guide.

Cross the longest covered (kissing!) bridge in the world in New Brunswick

Declared a National Historic Site in 1980, and a Provincial Historic Site in 1999, Hartland, the Longest Covered Bridge in the World is (so romantic!) a “kissing bridge.” Kissing bridges date back to the years of horse and wagon traffic, when young men “trained” their horses to stop about halfway across the bridge, wait while the couple shared a couple of kisses, and then continue to the other side of the bridge.

To much opposition – sermons were even preached in the area, cautioning how a “covered” bridge would destroy the morals of the youth – the bridge was covered in 1921-22. In 1987, the Olympic Torch for the 1988 Winter Olympics made its way across this bridge and in 1995 a Canadian postage stamp was issued honouring the bridge.

Explore Cape Breton and the Cabot Trail in Nova Scotia

Cape Breton Island is rated the #1 Island to visit in continental North America by Travel & Leisure Magazine. One of Canada’s most enchanting places, where the mountains meet the sea, the Cape Breton Highlands National Park is a vast region that protects majestic plateaus, deeply-cut river glens and spectacular ocean scenery. Take a sunset hike on the Skyline Trail, Learn to Lobster Boil, or take a Parks Canada Perfect Picnic with an incredible view.

The Cabot Trail is unquestionably one of the most scenic drives on the planet, but it is much more than a drive. To truly experience the splendour of it all, venture from the main road onto spectacular hiking trails, and off the beaten path into colourful fishing villages that hug the coast. Kayak along the coastal waters, take a whale watching tour, or visit an artisan studio.
cabottrail.com

Tong and shuck oysters in PEI

As part of the PEI Flavours Culinary Trail, a well-marked map outlining the best places to eat across the Island, there are a range of authentic foodie experiences that you can partake in. At the Tong and Shuck, you get to go out on the water with an oyster fisherman, harvest oysters and then try them as fresh as they come right there on the boat, and as part of a tasting experience with wine once you’re back on dry land.

Visit an iceberg in Newfoundland and Labrador

Despite their arrival from the Arctic every spring, the awesome sight of an iceberg remains new, year after year. On a sunny day, view these 10,000-year-old glacial giants from many points along the northern and eastern coasts. You’ll find ‘bergs in every shape and size, with colours ranging from snow-white to the deepest aquamarine. You can go on a boat tour, paddle along in a sea kayak or hike along a 29,000 km coastline and watch a sparkling spring berg parade down Iceberg Alley. Their sheer size sends the mind racing, and that’s not even counting the ninety-percent still unseen below the surface. It was these types and sizes of bergs that sank the infamous Titanic, a mere 400 miles from our coast.