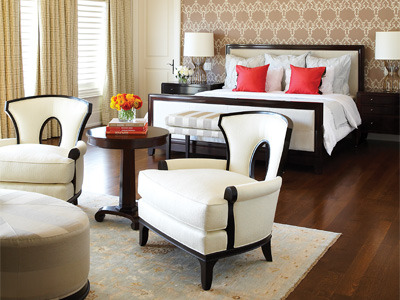 What does a luxury, custom home builder choose when he's designing a house for himself?

Greta Garbo-inspired, 1930s Hollywood elegance is the theme of the understated Brentwood address that is home to Carlos Jardino and his family. Adding to the glamour of the Oakville address is a long list of enhancements too: four bedrooms, a nanny suite, home gym, temperature controlled wine cellar, bar, pantry, serving room, walk-in closet with safe, an elevator with stereo speakers, flagstone pool deck, outdoor change rooms for the pool, remote controlled fountains and sprinkler system, two storey garage with a lift accommodating three stacked cars, and of course a home security system.

Designed by architect Michael Pettes, the exterior of the home ““ including the white flower garden ““ reflects an early 20th century Beverly Hills aesthetic: symmetrical design, simple lines, and stout thick anchor pillars, reminiscent of a time when the garage wasn't the most important part of the North American home. Here, the three car wide garage is tucked along the side of the house, out of view of either the backyard or street.

“I hate to see garages in the front of the house,” Jardino says. “We always put it along the side.”

City by-laws limit the horizontal size of garages, but not the volume, so the height of the garage can accommodate nine cars. Auto buffs will swoon over the tiled backsplash making car washing easier. The mudroom, with laundry (one of two) and washroom, is directly off the garage.

To say Jardino is house proud is an understatement. As owner of PCM Project & Construction Management, he frequently tours prospective clients through the family home that he shares with his wife (a real estate agent), two kids and an orange cat named Ginger. He points out details with assertiveness and is unwavering in his approach to designing and building luxury properties: compromising nothing including time frame and budget.

Born in Mozambique, he grew up in South Africa where he worked as an engineer then earned an MBA before moving to Canada permanently ten years ago. His building principle, he says, is similar to manufacturing industry strategy.

“Building a house is a process similar to building trains or jumbo jets. We design houses for construction and have a lot of pre-design meetings so when we start to build, there are no surprises.” The process from start to finish takes about four months. His own house was started in September and finished by January.

A significant difference in the way Jardino and his company build homes is that they hire architects to create homes around an interior and exterior design theme, including selecting furniture and measuring it, then constructing rooms perfectly to scale.

Fluid theme and monochromatic colour palette throughout the entire house is important to Jardino. “Furniture must match the house,” he says. “If you want to change your furniture, sometimes you have to change the house.”

The front room embraces fresh, muted gold tones and moss green print fabrics punctuated by sea blue accents that act as bursts of colour through the room thanks to interior decorator Trish Johnston. The soft coloured, streamlined but soft sofa is accented by two gourd-shaped creamy lamps. French doors lead to the side garden patio. Jardino points out the dark wood trim on two Barbara Barry wing chairs perfectly matches the wood selected for the panel wall, reflecting light from the floor to ceiling front window it faces.

Tailored uncluttered elegance defines the overall feel of the property. There's little art on the walls, allowing instead the moulding on the curved architectural wall in the central hallway to act as ornaments accented by two petite gold Thomas Pheasant bracelet sconces. These match the slightly jewelled gold chandelier with ivory silk shade hanging above the Vienna Laura Kirar dining room table, in a room that's almost an extension of the hallway. Again, no art hangs in this room; however, simple inset large pieces of print wallpaper framed by moulding the same colour as the walls acts as the accent the room needs.

Subtle details quiet what could otherwise be an overwhelming experience. “Nothing is over done,” Jardino says. “It's not pretentious or in-your-face, yet it's obvious everything is quality.”

If the kitchen is the heart of a home because that's where the family gathers, then Jardino has taken that concept one step further and created a kitchen/family room. Cooking and breakfast bar seating is located at one end; the centre of the space is for casual sit-down dinners in upholstered white chairs around a Scandinavian-inspired wood table; and sofa lounging in front of the television is at the other end. The kitchen and comfortable family room are one, with a red Baker couch drawing the eye to the centre of it.

Four complementary neutral shade accent chairs from Studio b complete the conversation area in front of the fireplace, and the dark solid walnut wall unit houses the television and hides an array of Bang & Olufsen sound technology ““ it's a 21st century media centre behind an 19th century library facade. Even the door to the side entrance is hidden seamlessly in the wall panelling. There's enough seating for six comfortably, and in the middle an oversized square ottoman invites feet up relaxation.

The white kitchen almost disappears into the background because all built-in appliances blend into the cabinetry along two walls of the room and only the stainless steel range top (with indoor barbeque and searing unit) built into the counter give away the purpose of the room. Subtle pot lights from Lutron frame the ceiling, adding ambient light and a simple Thomas Pheasant black iron chandelier with six shade lights hangs over the dining table.

In all homes built by Jardino, built-in microwaves and espresso makers are standard, and here a wine fridge is part of the side counter with bar sink. The kitchen's main sink is the centre of a marble-topped island and breakfast bar, which also conceals a dishwasher, garbage and recycling centre. A floor-mounted central vacuum outlet makes sweeping up easy.

A Thomas Pheasant lantern chandelier from Studio b hangs also above the central staircase that leads to the downstairs home gym, entertainment room, theatre studio and walkout to the outdoor saltwater pool area complete with three barbeques and an outdoor fireplace, perfect for entertaining.

Upstairs are three bedrooms including the impressive master with walk-in closet and ensuite bath with marble details, radiant-heated floors, a hand-blown Murano glass sconce, and stereo system from Bang & Olufsen above the oversized skylight tub worthy of a five star resort. In the bedroom, Calvin Klein Seno Sand drapes frame the wall-to-wall bank of windows with a view of the pool below. A signature Barbara Barry Dressmaker's chandelier hangs framed in the centre of the ceiling complementing the two lounge chairs and oval ottoman by the same designer that creates a conversation area in front of the fireplace and large flat screen television.

An example of custom craftsmanship is the fact the upholstered king-sized bed and two mahogany bedside tables fit perfectly between the two closet door frames ““ an advantage of designing a house around pre-selected furniture.

“Everything goes hand-in-hand,” Jardino says. “Proportions of a house, scale, and the architectural structure are as ““ if not more ““ important than interior design.” The inside, in this case, dictated the outside and everything, like Garbo herself, will remain a timeless classic.