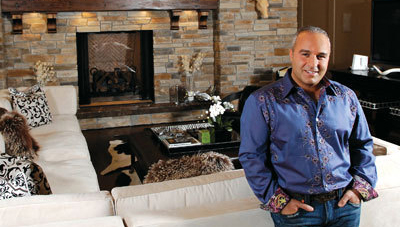 Clearly someone forgot to tell Ramsin Khachi, as he built up his acclaimed career in design, that with recognition, celebrity and success comes a certain degree of arrogance.

Instead, one is presented with an affable, enthusiastic and conscientious individual, honest to the core with no sign of pretention.

“I was always taught to work hard, be honest and do things right, and then good things will come,” he says. Well, looking at the success he has built around him, he would obviously do his parents proud.

A regular design expert on City-TV/A-Channel's national lifestyle show CityLine, a sought-after lecturer on design trends and principal and founder of Khachi Design Group in Oakville, Ramsin Khachi has been surrounded by design all his life. With his father an architect, Khachi took an active interest in the discipline while growing up in Port Credit.

He worked in construction to pay for university and later entered into a partnership building dental, medical and real estate offices. Unfortunately, the partnership eventually dissolved but Khachi, for his part, decided to stay involved in the industry and started building a new business from the ground up. One that, 18 years later, has firmly put Khachi on the ladder to success.

“Sometimes you get knocked down but it's all in how you get back up,” he muses. “You have to stick to what you love and that's why I continued on.”

Deciding to scale back and become involved in all aspects of renovation or design projects, Khachi loved getting his hands dirty, working directly with clients and seeing jobs through from start to finish. “There is nothing more exhilarating than walking into a space, having a vision for that space, and then having people trust you enough to bring that vision to life.

“As your business grows, and you prove yourself, you end up earning more and more trust with your clients. These lead to referrals, yes, but also to incredible creative freedom. There is always a time, in any project, when you're working with clients and they have to, at some point, hand over their complete and utter trust in you to fulfil a vision of the space,” he says.”I've worked hard and I'm really proud to say that now, at this point in my career, trust comes quickly and my team and I have been able to do some really great projects.”

One favourite project Khachi recently completed (although he laughingly admits that all his projects are favourites for one reason or another) is The Great Room, as featured recently on CityLine.

“In our client's home in Mississauga, they simply wanted to change the carpet and make the room more liveable,” he enthused. “We ended up walling over windows, inserting rustic beams in the cathedral ceiling and putting in a stone hearth and fireplace. They gave us their complete trust in our vision and now that room is the family's favourite living space. It turned out so well, it's a fantastic, warm, contemporary space with the perfect balance of rustic warmth to sleek, modern lines.”

“Ultimately that's our goal: creating rooms you want to spend time in,” comments Khachi,  “so that's why we spend a lot of time with our clients finding out how they use their space, what are their needs, likes and dislikes so that, in the end, it's a space designed for their living. And there's no better feeling than when you achieve that.”

Khachi Design Group spends a lot of time working with clients to define a project's specifications and designs to suit the client. But it doesn't end with the design ““ they also build out and decorate the space and as such are known as a one-stop shop.

It was the appeal of this one-stop shop philosophy that led Dove Spas, a division of Unilever, to Khachi. Planning to set up the first Dove Spa in North America, they were looking for a designer to create a space worthy of such a first. Khachi was thrilled to learn he had won the business in May 2008. Five months later the spa opened in Oakville and international executives from Dove were blown away. The design will now be used for all Dove Spas in North America and Khachi Design Group is already hard at work on the second spa, set to open in Toronto in April 2009.

To create the space, Khachi remained true to the essence of Dove: clean, uplifting and with just a hint of indulgence. Borrowing from the curved lines of Dove's logo, Khachi created a serene, white environment with curves throughout. There are in fact, few sharp edges in the space. The floor is liquid vinyl with cushioning ““ soft to the feet and silent. Treatment rooms are rounded pods and the lighting varies through a spectrum of orange and white to create the perfect mood and setting in the room.

“We used as many soft feeling materials and curves as we could to create a sense of calm,” explains Khachi. “Nothing hits you over the head. It's just heaven and clouds.”

“We go to trade shows all over the world looking for new materials all the time and we were able to apply many new finds, and new technology, to the Dove spa setting,” he says.

Finding new products, materials and technology is a passionate hobby of Khachi's. He makes it a point to keep current on what's available so that he can pass that knowledge onto his clients. “Knowledge is power and you have to have that knowledge to do your clients justice,” he says.

A frequent lecturer on design trends, Khachi is quick to point out that technology, and how it is incorporated into a room's design is an important component of all trends.

“Technology can play a huge role in contemporizing a look. Flat screens are one thing, but what's really exciting is the concept that your house, and what's in it, can communicate, wirelessly. For example, there's a new platform called Z-Wave that's seeing computer chips put into all sorts of products. For instance, with Schalge digital locks there's a Z-Wave chip inside so that you can open your front door with your PDA. Already on the market, by opening the lock, you can program a series of events to occur. The lock will “talk” to your light switch to turn the lights on, which will in turn communicate with the oven, so it's preheated for dinner. More and more manufacturers are adding the chip, and it's really exciting.”

A big trend, he identifies, is the Zoomers demographic getting younger as they get older. Zoomers have a lot of living to do and they also want to be in their home longer. “Technology in the home will play a huge role in keeping the home maintained and liveable, so that people, as they age, can stay there longer.”

Looking at trends and future plans, the biggest item on Khachi's agenda is simply to continue doing what he loves. He also dreams of building up his firm ““ literally. He would love to build a new office from the ground up and add to his roster of consultants to truly create a one-stop shop for clients. Currently he has three interior designers, two project managers and a couple of decorators on staff. He would love to have more space to create a collaboration with an architect, engineers, and a landscape architect as well as a retail showroom.

In the meantime, a spectacular online showroom can be found at khachi.com.