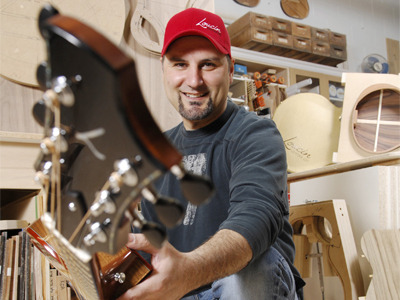 When clients pop into Malibu Woodwork to check out Garren Dakessian's custom cabinetry, they're in for a surprise. Dakessian loves to see the looks on their faces as they discover he makes guitars. “They're in awe of the instruments. At any given time, I have about 10 guitars here at various stages,” says Dakessian whose guitar-making seems to be taking over his Oakville shop on 1244 Speers Road.

“I love making guitars. It's all I think about. They become cherished heirlooms that get passed down in families. A guitar of this calibre can last 80 to 100 years,” explains the craftsman who produces 12 to 15 hand-made acoustic guitars a year.

Dakessian's fascination with wood began at the age of three. Growing up in New Zealand, when he went to the beach with his mother, Dakessian played with driftwood while other children played in the sand. At 16, he made his first electric guitar. “I wanted something a little different from the one my parents bought me and figured, how hard could that be,” laughs Dakessian, who's been making them ever since.

Wanting to branch out, he tried his hand at making acoustic guitars six years ago.

“I was terrified to make an acoustic. They're so different from electric ““ it's like comparing a carpenter to a cabinet maker ““ they're worlds apart.”

Delicate, exotic woods can split, crack and break as they are bent into shape. “It's taken me years to have confidence,” Dakessian admits about his one-of-a-kind Loucin guitars, named after his late mother who inspired him. He also named Loucin guitar models after his wife, mother and son, Zak, who is building his first acoustic guitar at 15.

Dakessian's been trained by well-known guitar-makers, Tony Karol and Kevin Ryan. “There are no trade secrets, just one big community,” says Dakessian who also teaches the art of guitar-making.

When Dakessian learned of the talented Armenian musician and political activist sharing the same ethnic background, he wanted to create a guitar for him. “It seemed like a natural process to approach Serj because he's a generous guy who helps fellow Armenians and that appealed to me.”

After two years, Dakessian was given the go ahead to make Tankian's guitar.  Communicating by email, they decided on guitar size and style, but Tankian left the rest up to Oakville's guitar aficionado who's been playing for 30 years.

Wanting to make the guitar international like Tankian, a Lebanese-born Armenian residing in Los Angeles and New Zealand, Dakessian decided on a tonal wood native to California: Curly Claro Walnut for the back and sides, Alaskan Sitka Spruce for the top, and for the appointments around the perimetre and on the headstock, Paua Abalone shell from New Zealand.

Dakessian presented the guitar to Tankian in May and photos of the event are posted on the Loucin website.

Tankian's stunning Loucin may be seen internationally as he kicks off his solo European tour, Elect the Dead. “When guitar players watch live music, the first thing they check out is the musician's guitar,” Dakessian explains. “You can always spot the Gibsons and Fenders, but when you see unique ones, you think hmmm, what is that and try to get closer. The next thing you know you're searching the internet to find out.”