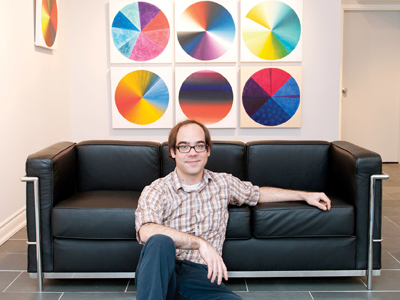 What better way to celebrate life on earth than to pay tribute to others through art. That's the motivation behind artist Kyle Tonkens' ongoing series, 100 Billion Sons & Daughters.

“In the course of existence, there have been about 100 billion different people living on the planet. I find that an amazing number,” says Tonkens. “What's interesting is that every single one of these lives is unique from every other. I decided to express that amazing idea, by doing these paintings, in a sense to honour every single person that's ever lived.”

Tonkens' early portraitures, small ink drawings representing people's lives, were quick to execute but after completing about 200, he took his project in another direction. He began creating colourful acrylic paintings symbolizing specific people, rather than conceptual ink drawings.

“I moved into painting because really to me, if I was truly going to honour these people, I thought it would be fitting to honour specific individuals. I started using as inspiration for each painting, a specific individual and asked them to add colour choices for me to use in their painting,” says Tonkens about recent portraitures he's completed. His abstract artwork is meant to be a visual representation of people's biographies.

Tonkens approaches subjects he admires in the art world or from his community for their contribution, as well as family and friends.

One subject Tonkens sought out was William Huffman, advocate for the development of arts communities in Canada. “I really like the idea of what he does at the Canadian Council for the Arts, so I approached him and he agreed to give me his colours, so that's kind of awesome,” says Tonkens. Huffman's portraiture consists of vibrant hues: oxblood, yellow ochre and black.

In the summer, Tonkens installed his paintings at Burlington's Waterfront Hotel where he took part in Dream State, a fundraising event and auction organized by No Vacancy supporting Halton Women's Centre.

Commissioned paintings have grown in popularity since art enthusiasts viewed Tonkens' recent exhibits.
“I find people are often interested in having their colour choices painted and then purchase that work versus purchasing someone else's colour choice. Most often they see my work and like the idea so they approach me and request a commission of their colours,” explains the emerging Oakville artist.

For the integrity of 100 Billion Sons & Daughters, colour selections are entirely up to the individual with no restrictions. While some select one shade, others pick as many as 10 or 12, like Kyle's five-year-old nephew.
“I gave him a colour chart. There were quite a few to choose from, so he had fun with it and picked his favourites,” explains Tonkens. “Probably the most notable was invisible ““ it's a transparent white ““ I found that quite fun to paint.” This portraiture was part of Tonkens' solo exhibit of 100 Billion Sons & Daughters in November at Oakville's GNstudio Contemporary Art Gallery on 123 Lakeshore Road West. The gallery will also show Tonkens' collaboration with fellow artist, Germaine Hanna in the new year.

“Motivation for creating art is my way of developing a dialogue with my world and art itself is an awesome avenue for doing that. It's generally understood as a place where we can freely express ourselves. For me, what it comes down to is what I want to say. It's a way to say thank you for this life!”