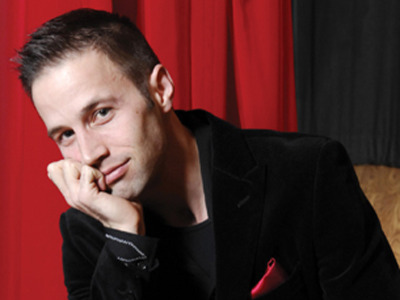 This isn't your grandmother's theatre (unless of course your grandmother is a professor of comparative literature). This is the thinking person's small space dramatic experience and Copp, a recent University of Guelph drama graduate, is optimistic there's a growing cultural class gestating in Burlington ready to take on some more heady performances. Maybe that's true. Maybe the conservative City by the Bay is ready to loosen its tie, shake off the gray suit and remind itself there's more to the human condition than chasing the bottom line.

Trevor Copp believes its time, so he launched Burlington's first professional theatre company one year ago.

In 2009, Tottering Biped Theatre completed season one with a lot of help from the Burlington Student Theatre, which offered volunteers, offices, and performance space. Financial support came in the form of a charitable grant from the Million Dollar Round Table Foundation. The company staged three weekend performances of shows whose themes ranged from existential comedy to incest to terrorism. Yet the audiences grew with each performance. “More and more people are coming to each show and more are staying with us,” Copp says. “We appeal to one in ten people who really appreciate this kind of work. It's not for everyone.”

Those people filled into risers in the retrofitted performance space on the second floor of the former Optimists Club on Prospect Street, and will hopefully do so again this summer. But by season three, Copp believes ballooning interest will allow the company to rent the 200-seat studio performance space in the new Burlington Performing Arts Centre, currently under construction. “We'll be the only local presence in the building,” he says. “The rest will be touring shows.”

Unlike community theatre, that's run by groups of enthusiastic volunteers approaching theatre as a hobby or sideline, Tottering Biped places emphases on professionals auditioning and paying performers for their time and talent. Copp, who grew up in Burlington, is concerned artistic skill has to leave the city to find employment. So, he's adamant about fairly compensating actors, directors and writers who stage these productions, creating opportunities for them in town. Many of the actors Copp uses spent their high school years at the Burlington Student Theatre, and then went on to earn both classroom and stage credentials at university and professional theatres. For him, however, this is still a labour of love and he balances his Biped Theatre time with acting professionally on other stages and teaching ballroom dance at a Burlington studio.

“I think more people will go to the theatre if it's down the street,” he says. “Also, theatre doesn't  do well when understood only in terms of business practices.” Yes, selling the economic impact of arts and culture is at times a necessary argument to make, but that's not its primary role. Copp emphasises theatre, like any art, is ultimately about thinking, inspiring and exploring. It's also about making intellectual pursuit its own form of entertainment.

The Tottering Biped second season will test Copp's theory, beckoning all members of Burlington's cultural class. The 2010 season starts by staging, June 24 to 26, a provocative piece written by Kitchener native Gary Kirkham called Falling A:Wake. Copp is particularly excited about this play, that takes place after the 9/11 attack in New York City, because it's been optioned by an off-Broadway production company, but Burlington is getting it first. It's about an elderly couple who discover a body, still attached to a chair, in their backyard minutes after the Twin Towers crumble. The entire play takes place while they are waiting for police to arrive.

This production will be followed by a controversial performance called My Name is Rachel Corrie, July 29 to 31. The play is based on the journals of an American woman well known in Palestine for dying after volunteering to be a human shield against Israeli tanks that regularly bulldoze Palestinian homes in the name of Israeli security. This production will be Burlington's first export to another stage, when it makes its way to Kitchener later in the year.
Finally, The Ends of the Earth by Morris Panych closes out the season and runs, for the first time in Biped Theatre history, for two weekends August 26 to 28, and September 2 to 4. Panych's work is a staple on the Stratford stage and The Ends of the Earth was his breakout play, earning the Governor Generals Award in 1995. Five actors are involved in this comedy that sees two paranoid people chase each other to the ends of the earth. Fittingly, it's an appropriate metaphor for a fledgling theatre company chasing the belief that even in a quiet predominately middle-class community, there lurks a thirst for intellectual stimulation. For tickets visit totteringbiped.ca.