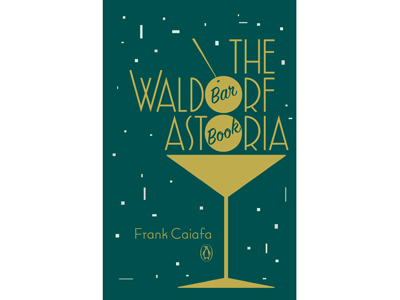 FOOD
The Waldorf Astoria Bar Book
by Frank Caiafa
First opened in 1893, the Waldorf Astoria New York has become one of the world's most iconic hotels with Peacock Alley as its most popular bar. Now lovers of the bar's infamous drinks can imbibe at home thanks to Peacock Alley bar manager Frank Caiafa's release of The Waldorf Astoria Bar Book. Providing recipes, history and how-to, you will easily learn how to prepare pre-prohibition classics such as the original Manhattan or daiquiris mixed the same way Hemingway preferred. Alongside these quintessential drinks are some of Caiafa's own award-winning creations including the Cole Porter, an enhanced whiskey sour named for the famous Waldorf resident. Each recipe features tips and variations along with notes on the drink's history and advice on setting up your own home bar and scaling up your favourite recipes for a party.
$34; penguinrandomhouse.ca

FOOD
32 Yolks: From My Mother's Table to Working the Line
by Eric Ripert
World renowned chef Eric Ripert regales readers with his coming-of-age story from a child in the south of France to the Michelin-starred and four-time James Beard Award-winning chef we know today with the release of 32 Yolks: From My Mother's Table to Working the Line. Hailed by Anthony Bourdain as “heartbreaking, horrifying, poignant, and inspiring,” 32 Yolks begins with the divorce of Ripert's parents when he was six-years-old, starting him on a lonely path. Shipped off to boarding school by his cold, bullying stepfather, it was only a few years later that the father he idolized died while on a hiking trip. During this time, it was food that was his comfort. Told that the kitchen was no place for boys, Ripert would watch his mother and grandmother from the doorway as they prepared his favourite meals by hand. At the age of 11, he was taken under the wing of an eccentric local chef and it was then that Ripert realized food was more than an escape ““ it was his calling. This passion fuelled Ripert through the drudgery of culinary school and into the high-pressure world of Paris's most elite restaurants where he realized that learning to cook was the easy part and surviving the line was the true battle.
$37; penguinrandomhouse.ca

FICTION
It Ends With Us: A Novel
by Colleen Hoover
Colleen Hoover, the New York Times bestselling author of numerous novels, returns with the highly anticipated release of It Ends With Us: A Novel. Lily has never had it easy but it didn't stop her ambitious spirit from working hard for the life she wants. When she feels a spark with a gorgeous neurosurgeon, Ryle Kincaid, everything in her life feels too good to be true. Ryle is assertive, stubborn, and a little bit arrogant while also being sensitive and brilliant. Though he has a soft spot for Lily she finds his complete aversion to relationships a bit disturbing. As she finds herself becoming the exception to his “no dating” rule she can't help but wonder what made him this way in the first place. As questions about her new relationship overwhelm her so do thoughts of her first love, Atlas Corrigan, the link to a past she left behind. When Atlas suddenly reappears in her life, the new one she has built with Ryle becomes threatened. A tale of love at the ultimate price, Hoover presents a bold and deeply personal novel with a captivating cast of characters. Available August 2.
$22; simonandschuster.ca

FICTION
Barkskins: A Novel
by Annie Proulx
Annie Proulx, the Pulitzer Prize- and National Award-winning author of Brokeback Mountain and Shipping News releases her ninth book with Barkskins: A Novel. The story begins in the late 17th century as two penniless young Frenchman, René Sel and Charles Duquet arrive in New France where they are bound to a seigneur for three years in exchange for land. Working under the seigneur they become woodcutters (barkskins). René suffers hardships in this new life, becoming trapped by the very forests he's charged with clearing, and is forced to marry a Mi'kmaw woman with their eventual descendants living a life trapped between two cultures. Charles on the other hand, a crafty and ruthless man, runs away from the seigneur and becomes a fur trader before setting up a timber business of his own. Throughout the novel we are presented with the tales of both Charles and René's descendants over 300 years as they travel across the world under stunningly brutal conditions and the revenge of rivals, accidents, pestilence and cultural annihilation that they face.
$39.99; simonandschuster.ca

JUVENILE FICTION
Harry Potter and the Cursed Child ““ Parts One and Two (Special Rehearsal Edition Script)
by J.K. Rowling, Jack Thorne & John Tiffany
Based on an original, new story by J.K. Rowling, Jack Thorne and John Tiffany, Harry Potter and the Cursed Child ““ Parts One and Two marks the eighth story in the beloved Harry Potter series and the first official story to be presented on stage. In this new tale we meet Harry years after he's left Hogwarts and is now a husband, father of three and an overworked employee at the Ministry of Magic. As Harry grapples with a past that refuses to stay where it belongs, his youngest son Albus is struggling with the weight of a family legacy that he didn't sign up for. As the past and present ominously meet, both Harry and Albus discover that sometimes darkness comes from the most unexpected places. The play will make its world premiere in London's West End on July 30.
Available July 31.
$39.99; scholastic.ca

MEMOIR
The Girl With the Lower Back Tattoo
by Amy Schumer
The Emmy Award-winning comedian, actress, writer and star and co-creator of the popular show Inside Amy Schumer puts her smart, satirical humour into print with the release of her memoir The Girl With the Lower Back Tattoo. Loved for her extremely candid approach to comedy, Schumer penned an uproariously funny collection of personal and observational essays that will keep you laughing. Her frank, down to earth humour comes through in stories about her teen years, family, relationships and sex giving a picture of moments that helped shape her into the courageous and relatable comedian we know today. From the raucous to the romantic, the heartfelt and harrowing, this universally appealing series of stories will leave you wanting more. Available August 16.
$36.99; simonandschuster.ca