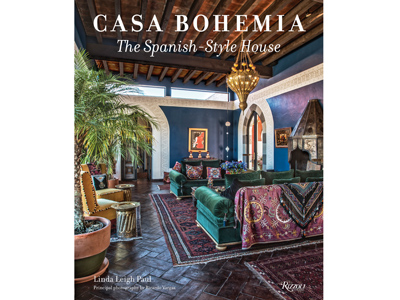 HOME & DESIGN
Casa Bohemia: The Spanish-Style House
by Linda Leigh Paul; photographed by Ricardo Vidargas
From vibrant architecture to the endlessly rich details of ornate wrought iron, colourful tiles and graceful arches, Casa Bohemia: The Spanish-Style House explores the classic and newly built Spanish-style houses of the southwestern and southern United States, Mexico and Spain. Stunning colour photographs capture the interiors and exteriors of 29 residences built between the late seventeenth century and today, showcasing beautifully preserved homes and restored haciendas framed by the history of this enchanting style's Iberian roots to the development of Mission style homes in the Americas and the ever-flourishing Spanish Revival and Mediterranean styles.
$55; rizzoliusa.com

HISTORY
Dead Wake: The Last Crossing of the Lusitania
by Erik Larson
As the luxury ocean liner the Lusitania set out on May 1, 1915 from New York, bound for Liverpool with a record number of children and infants, its passengers were anxious. Germany had declared the seas around Britain a warzone with its U-boats wreaking terror on the North Atlantic for months. Toted as one of the era's great transatlantic “Greyhounds” her captain, William Thomas Turner, knew that his ship, the fastest in service, could outrun any threat and placed enormous faith in the gentlemanly strictures of warfare that had kept passenger ships safe. With Germany determined to change the rules of the game, an array of forces both big and small converged to produce one of the great disasters of history. Switching between the voice of the hunter and the hunted, #1 New York Times bestselling author Erik Kaplan weaves a thrilling tale of glamour, mystery and real life suspense in Dead Wake: The Last Crossing of the Lusitania.
$32.50; penguinrandomhouse.ca

MEMOIR
I Was A Child: A Memoir
by Bruce Eric Kaplan
American artist and frequent cartoon contributor to The New Yorker Bruce Eric Kaplan, also known as BEK, has released his first work of non-fiction with I Was A Child: A Memoir. Accompanied by his signature drawings and full of wonder and anxiety, Kaplan recalls his conventional, relatable childhood years growing up in Maplewood, New Jersey,  “I guess this book is about surviving what we were born into,” says Kaplan. “Our parents, our relatives, our religions, our friends, and in my case, New Jersey. For worse, and for better, these things shape, push and prod us into becoming whoever we are. I tell people this book is my Girl, Interrupted. Except it's about a boy, he didn't get hospitalized, and it has funny drawings.”
$28.95; penguinrandomhouse.ca

FOOD
Seven Spoons: My Favourite Recipes for Any and Every Day
by Tara O'Brady
Nearly ten years after starting the popular food blog Seven Spoons Tara O'Brady's highly anticipated debut book, Seven Spoons: My Favourite Recipes for Any and Every Day, hit shelves this past April. A columnist in UPPERCASE magazine, O'Brady's work has also been featured in the quarterly publication Kinfolk and The Globe and Mail, as well as online at BonAppetit.com, Saveur.com, PBS.com, StyleAtHome.com, Oprah.com and more. Sharing stories and recipes from her Southern Ontario home, O'Brady creates fresh, whole, hearty, ingredient-drive recipes showcasing a myriad of culinary influences. Alongside elegant photography you will find recipes like Roasted Carrots with Dukkah and Harissa Mayonnaise, Braised Beef Short Ribs with Gremolata and Plum Macaroon Cake.
$29.95; penguinrandomhouse.ca