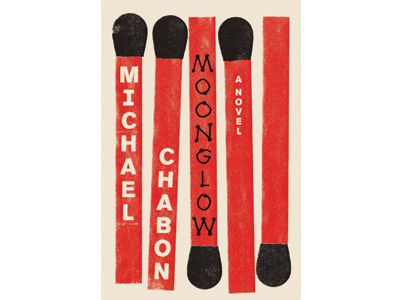 FICTION
Moonglow: A Novel
by Michael Chabon
Pulitzer-prize winning author Michael Chabon introduces a work of fictional nonfiction with the release of Moonglow: A Novel. Loosely based on personal experiences, Moonglow tells the tale of the deathbed confession of a man only referred to as “grandfather” by the narrator. From the Jewish slums of pre-war south Philadelphia to the invasion of Germany from a Florida retirement village to New York's Wallkill prison, the novel revisits an entire era in one week's time as experienced by a single life. Moonglow is a tale of truth, lies, family legends, passionate love and adventure; of madness, of war, sex, marriage and desire, existential doubt, model rocketry, of the shining aspirations and demonic underpinnings of American technological accomplishment. Above all else, this is a story of the destructive impact and creative power of keeping secrets and telling lies. Available November 22.
$35.99; harpercollins.ca

Lyrebird
by Cecelia Ahern
Cecelia Ahern, international bestseller, author of novel-turned-film P.S. I Love You and creator of the television show Samantha Who? returns with a story of life in two parts. Lyrebird focuses on the life of Laura, a young woman who lives alone in a small stone cottage deep in the woods of south west Ireland and the way her life changes when a documentary film crew arrives. When Solomon, the crew's sound specialist, discovers Laura's innate ability to mimic sound her life is turned on it's head as the film crew offer's her a way forward. Though Solomon knows the world will love her, Laura is torn between the chance that this opportunity will allow her to spread her wings, or potentially trap her in a gilded cage. Available November 8.
$34.99; harpercollins.ca

I'll Take You There: A Novel
by Wally Lamb
New York Times bestselling author Wally Lamb brings us a novel of resiliency, strength and the power of women in I'll Take You There: A Novel. One evening while Felix, a film scholar who runs a movie-night club at a former vaudeville theatre, is setting up the evening's film he is confronted by the ghost of the late trailblazing motion picture director Lois Weber. Invited by Lois to revisit, and in some cases relive, scenes from his past as they are projected onto the big screen, Felix is able to reflect on the women who have profoundly impacted his own life. Through these reflections Felix gains an enlightened understanding of his daughter Aliza, sister Frances, and Verna, a fiery would-be contender for the 1951 Miss Rheingold competition, and the pressures, trials, feminist ideals and realities that they, and the women of every era, must face. Available November 22.
$31.99; harpercollins.ca

The Twenty-Three
by Linwood Barclay
International bestselling Oakville-based author Linwood Barclay returns with the third and final piece of the Promise Falls trilogy, The Twenty-Three. On the Saturday of Memorial Day weekend hundreds of people are turning up at hospitals with similar symptoms ““ vomiting, dizziness, loss of consciousness ““ and dozens more are dying. Investigators quickly zero in on the water supply, but one question remains, especially for private investigator Cal Weaver: Who exactly would benefit from poisoning this town, and what is their motive? As the tragedies mount and the pool of suspects grows larger, Detective Barry Duckworth is faced with another problem. Knowing that the killer of Olivia Fisher and Rosemary Gaynor is still on the loose and that the mystery behind the significance of the number twenty-three is growing, he begins to realize that there is a link to a much larger scheme than he had originally imagined and he must race to piece together the puzzle in order to stop someone's sinister revenge plot.
$32; penguinrandomhouse.ca

FOOD
Mastering the Art of Japanese Home Cooking
by Masaharu Morimoto
Revered celebrity chef Masaharu Morimoto peels away the intimidating nature of Japanese cooking in his latest cookbook Mastering the Art of Japanese Home Cooking. Through a selection of carefully curated recipes along with more than 150 colour photographs, Chef Morimoto reveals the magic of authentic Japanese food by introducing readers to the healthy, flavourful and surprisingly simple home dishes favoured by Japanese home cooks. Showing readers that building a pantry of half a dozen easily accessible ingredients can open them up to hundreds of delicious recipes, he empowers them to take on traditional recipes and provides them with the confidence to adapt and create their own dishes. From renditions on classics like miso soup, nabeyaki udon and chicken teriyaki to little known dishes like fish simmered in sake and soy sauce and playful riffs on classics like the reimaged tuna-and-rice bowls done in the style of Hawaiian poke, Morimoto proves that the right ratios of ingredients and proper use of seasonings can open up a whole new world of flavours.
$56; harpercollins.ca

The Firehouse Chef: Favourite Recipes from Canada's Firefighters
by Patrick Mathieu
When posed with the question, “are you gonna cook, or clean up?” Waterloo firefighter Patrick Mathieu chose the latter. In The Firehouse Chef: Favourite Recipes from Canada's Firefighters Mathieu recounts his culinary experience preparing meals for his fellow fireman and how he has kept them well nourished for over 15 years. The Firehouse Chef is filled with original recipes along with contributions by firehouse chefs stretching from Newfoundland to British Columbia like Old South Classic FireHouse Pulled Pork, Cauliflower Steaks with Salsa Verde, Yukon Elk Chili with Chocolate and Cinnamon and Thai Drunken Noodles. From simple starters, gourmet desserts and hearty mains, this cookbook is perfect for households that constantly find themselves on the go.
$34.95; whitecap.ca

The French Chef in America: Julia Child's Second Act
by Alex Prud'homme
Great-nephew to Julia Child and coauthor of the revered work My Life In France, Alex Prud'homme vividly recounts the infamous chef in his latest work The French Chef in America: Julia Child's Second Act. Following the publication of her first cookbook Mastering the Art of French Cooking, Child suddenly found herself to be the face of French cooking in America and facing the pressure that came along with this new role. In The French Chef in America Prud'homme shows what it was like for Child to deal with difficult colleagues, the challenges of fame and her mastery of using her newfound celebrity to create what would become a new type of food television, ultimately uncovering the woman behind the “French Chef” persona.
$32.95; penguinrandomhouse.ca

MEMOIR
Testimony: A Memoir
by Robbie Robertson
On the 40th anniversary of The Band's legendary The Last Waltz concert, guitarist and principal songwriter Robbie Robertson tells his own tale in Testimony: A Memoir. Written over five years, Robertson presents the journey that led him to some of the most pivotal moments in music history. Beginning his spellbinding story with adventures from his half-Jewish, half-Mohawk upbringing on the Six Nations Indian Reserve and the gritty streets of Toronto, Robertson leads us through his voyage to the Mississippi Delta at the age of sixteen; his wild, early years on the road with legend Ronnie Hawkins and The Hawks; his unexpected ties to the Cosa Nostra underworld; his experiences with Bob Dylan on his 1966 world tour and their resulting collaborations; and finally, the formation of The Band and the forging of their unique sound, all culminating in their infamous farewell concert, brought to life in Martin Scorsese's film The Last Waltz. Available November 15.
$35; penguinrandomhouse.ca

DESIGN
Versace
by Donatella Versace, Maria Luisa Frisa and Stefano Tonchi,
contributions by Tim Blanks and Ingrid Sischy
The highly intimate visual history of the renowned Italian fashion house, Versace chronicles Donatella Versace's interpretation of the brand in the twenty-first century after taking over the creative artistic direction of the family-run business in 1997. From exclusive contemporary and archival imagery from both the runway and backstage to intimate scenes at the Versace atelier, we are presented with Donatella's remarkable work as curator and face of the brand. Along with intimate essays from fashion's most authoritative voices are a selection of images shot by Richard Avedon, Irving Penn and Steven Meisel among many others, we are able to see Versace's evolution as modeled by the original supermodels such as Christy Turlington, Naomi Campbell and Linda Evangelista as well as red-carpet coverage of the Hollywood elite donning Versace couture.
$95; rizzoliusa.com