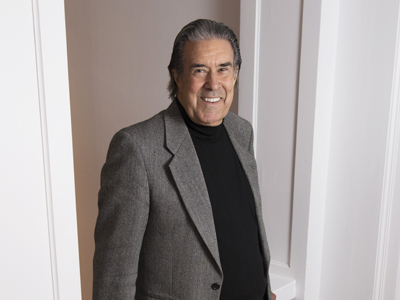 Don Pangman believes there's a Pablo Picasso or Ginger Rogers waiting to emerge in every one of ArtHouse's students. And he'll be damned to ever let a lack of money get in the way of the world meeting the next great painter, dancer, or actor.

He believes delving into the arts should not be the sole domain of the elite. And it's not, at least in Burlington, Oakville and soon, Milton. Pangman has made sure of this over the past six years. That's when he created ArtHouse, an organization has exposed 2,725 children to a creative outlet, cost free.

“It's been one beautiful project since it all began in September 2009,” says Pangman who has lived in Oakville since 1976. “Quite frankly, it is perhaps the most fulfilling career move I have ever made.” That's high praise for a former Bay Street broker who enjoyed a “wonderful” 30-year career in the investment business.

ArtHouse provides more than 150 cost-free programs to young people from ages seven to 12, and puts special emphasis on giving children from low-income families front-of-the-line access to all of them.

It's a charitable effort that has far-reaching benefits. According to a newly released discussion paper published by the Ontario government, which is in the process of creating its first Culture Strategy, “In early years activities, at school, and through after-school and community-based arts and culture programs, children and youth develop creativity, life skills, and confidence. Along with techniques for self-expression, youth often learn leadership, entrepreneurial, and professional skills.”

He first became attuned to this connection through his volunteer work with the United Way of Oakville in the late 1990s, just after retiring from the workaday world. Pangman led the 1999 fundraising campaign and served on the local United Way board for eight years.

“That experience really educated me on many of the needs within our community,” he says. “In particular my attention was driven to the arts.” A fortuitous meeting with a couple of friends convinced him to forge ahead and make something happen. ArtHouse was born with a focus on visual arts, drama and ethnic cooking.

“With the huge drop in both curricular and extracurricular arts programs in the education system over the past 20 or so years, evidence was clearly pointing to a huge need for creating a level artistic playing field for as many children as possible.”

He credits ArtHouse's Program Manager Gemma Hagerman with the charity's growth and “50 of the best instructors on this planet” for its lasting integrity and quality programming. Pangman adds that ArtHouse's strong collaborative relationships have given the charity a healthy lifeline. Its “wonderful” partners include Oakville Galleries and the Art Gallery of Burlington, as well as 25 venue providers that open their doors to programs in neighbourhoods close to where ArtHouse students live, and 15 community agencies which help the organization reach out to the most vulnerable children, as well as close to 200 generous donors and funders.

Not one to rest on his laurels ““ and there have been many earned over his 18 years of volunteering ““ Pangman is now dedicated to solving a problem celebrated 20th century Spanish artist Pablo Picasso identified. Picasso said: “All children are artists. The problem is how to remain an artist once he/she grows up.”

To this end, ArtHouse created the Take Five program that encourages its program “graduates” to take on leadership roles and help herald a new crop of budding artists.

Reaching an older age group is essential, Pangman adds. “Engagement in arts and culture, particularly for at-risk youth, is linked to improved social and problem-solving skills and higher academic achievement.”

For Pangman, the proof that ArtHouse is an asset in the community comes from the hundreds of unsolicited testimonials submitted throughout the year.

“Without exception every comment has verified that we are changing the lives of young children and indeed their families.”