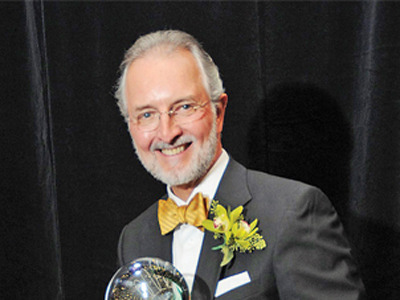 Don Smith has a dream. He wants to take 33 million Canadians to Sierra Leone for a day. “Seeing this developing country, would change everyone's attitude in Canada. Not just about the blessings we have in our country, but if everybody gave a dollar a day, we could change their world,” says Smith, CEO of Smith's Funeral Homes in Burlington.

At a gala dinner, Smith was recently recognized with the 2009 Philanthropist of the Year Award by the Burlington Community Foundation for his countless hours of dedicated volunteer service and leadership in the community. Smith's impact on charitable organizations like The Salvation Army, Christian Veterinary Missions of Canada, Rotary Club and Lions Club and his fundraising initiatives at the Joseph Brant Memorial Hospital are inspirational.

“I've had so many great recognitions around humanitarian work and community work, a lot within my business, but I was quite humbled and pleased to be recognized as the inaugural award winner,” explains the long-time Burlington resident. “You say thank you very much, but that's not why any of us do it. You do it because you feel it's part of your spirituality and belief system, and your obligation to society. Life has been really good to me, why shouldn't it be good to others? That's how I see it.”

Smith credits his parents for the man he's become. “That's what they were like, although they went about it in a quiet way,” says Smith. “We didn't have awards and recognition like this 30 or 40 years ago, but my gosh if they had, my mom and dad would have been the winners!” says Smith, whose parents packed boxes of used clothing to send overseas and gave university scholarships to young people who couldn't afford to attend.

For more than 40 years, Smith has dedicated his life to helping others, but it wasn't until five years ago when he heard a speaker at his church about Sierra Leone's devastation, that it caught his immediate attention.

Smith learned how people were brutally mutilated and many murdered during their civil war, but even though their country was ranked least liveable in the world by United Nations' standards, people recovered.

Smith was mesmerized. He and his adventure travelling buddy, Ebbe Marquardsen accompanied the Christian Veterinary Mission to see how they could help. “We visited orphanages and amputee villages, prosthetic hospitals, mercy ships, every place where people had been victims of violence,” he says.

But nothing captured their hearts more than the children who had seen their parents mutilated and killed right in front of them. “We couldn't turn our backs and walk away ““ we had to do something.” On the plane ride home they talked about nothing else.

When the pair returned to Sierra Leone in November 2007 they introduced the children to Canada, by bringing soccer balls signed by Canadian families showing them people cared.

“We'd drive along the road, see a school and stop, take a couple of soccer balls and interrupt the whole class, look at the smiles on their faces and go crazy with the kids kicking the soccer ball around,” says the CEO, who has talked to about 5,000 children at 25 schools and orphanages.

In February, a donated container will arrive filled to the brim with chicken pens for farmers, sewing machines for polio victims, hand tools, generators, medical supplies, wheel chairs, and of course soccer balls for the kids.

“It's filled with just about anything to rebuild their lives with dignity,” says Smith. “All they want is a chance at life. We need to pause and remember to give back by giving them an opportunity.”