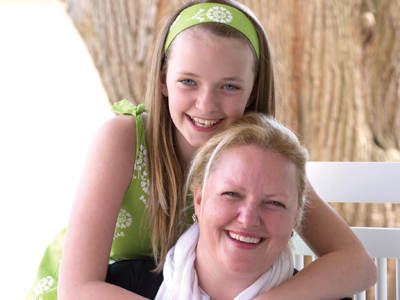 It's not often a child looks outside of their own world to see the struggles of others but 11-year-old Oakville resident Alex Dinsmore is not like other kids.

Remarkably mature for her age, Alex and her entrepreneur mother, Jackie, decided to team up using Jackie's skills as the owner of Flapjacks Kids (a division of Luvali Limited) and Alex's outgoing spirit to launch The Ivy & Alex Project and create fashion for good. The “Ivy” in the name stands for I Value You ““ an opinion that is clear the Dinsmore's take to heart.

Using Alex's age as a guiding point, the mother-daughter duo, with the help of Alex's grandmother, designed a reversible dress meant to grow with a child from dress to tunic and finally top. Each dress is manufactured in Toronto and features a flower pattern with petals made from tiny hearts, a print that was designed in New York exclusively for the project. Working in connection with World Vision, the Dinsmore's decided on four colour options with each colour corresponding to a specific cause.

By donating a percentage of sales, ranging from five to 25 per cent depending on the outlet, the green dress provides food, blue clean drinking water, pink aids with medicine and education and red helps various local projects. Alongside the dresses you can purchase matching headbands and hats that also raise money for World Vision.

“We just wanted to help other people,” says Alex. “I go to church all the time and they have offering. Sometimes in class we learn about different cultures. Me and my mom decided we didn't just want to sell dresses, we wanted to sell them so that we could help other people. So it's not only us getting a benefit from the dresses, but everybody's getting the benefit.”

Alex became involved with the project through Jackie's desire to spend more time with her daughter, combined with Alex's dreams of one day becoming a doctor or entrepreneur herself (“either or,” she says with a giggle).

“She's always been on the sidelines looking in and I hated that,” says Jackie. “It's hard enough when you're working for yourself, running around, and you don't get to see your kids as much as you want. This is a win-win for me. I thought if [Alex] shows an interest, why not bring her on? She was old enough and mature enough to be able to do that ““ I don't think all kids could handle the pressure.”

In order to ensure the project's success and raise awareness the Dinsmore's launched an Indiegogo campaign that came to a close at the end of June.  Included in the fundraiser is a video of Alex explaining the project in her own words and the endearing words of her friends and what they believe people need to survive. Responses range from the detailed: “If I had a magic power I would grant equal rights for all children. I'd give them a safe home to live in, I would make sure they have proper medical care, a proper school board, a fair government, healthy foods, nice clean water and just a nice clean place to live in,” to the adorable: “Dirty water makes your tummy sick.”

Though Alex and Jackie would love to see the project grow, the impact it can have on people both big and small is what matters most to them.

“It's people caring about other people. Not just caring about themselves, buying clothes for themselves. They're going to buy clothes and some of that money is going to go to people who need it,” says Alex. “I'd love to see everybody taking part and trying to help, even if it's not buying a dress. You could do something in your neighbourhood or just raise awareness [for a good cause].”

Sometimes all it takes is a simple idea and a passion to create a world of difference.

For more information or to purchase a dress visit: ivyandalexproject.com