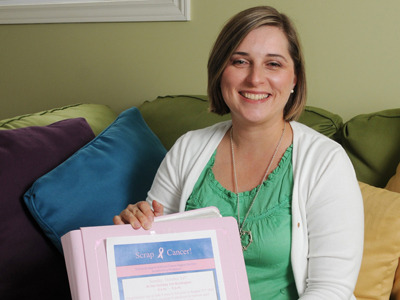 Sharon Gilchrist was diagnosed with breast cancer in October 2006. Rebecca McKenzie remembers the day very clearly. She was at the Burlington Mall with her kids when she saw her friend Sharon with her husband Paul. “We were talking just like normal and all of a sudden she says “˜well, actually we've had some bad news. I've been diagnosed with breast cancer,'” recalls McKenzie. “The colour drained right out of my face and I was in shock. It was scary to think what might happen with her, her kids and her family.”
About a month later, McKenzie had become really angry about why this had to happen to her friend, and that is when the idea for a scrapbooking fundraiser came to her.
Scrapbooking was something that Gilchrist and a few of their close friends got into when their children were all about a year old. “I was thinking “˜could I pull it off?' I had never done anything like this before. I was kind of nervous and shy about it,” she says. “I didn't know if people would think it was a crazy idea, but I had the idea and went with it and I'm glad I did.”
In 2007, McKenzie started Scrap Cancer!, a fundraiser that has now raised more than $40,000 for Burlington's Breast Cancer Support Services (BCSS). The proceeds provide cancer patients with chemotherapy kits, mastectomy kits and aid in other support services. This past May, she was recognized with the Community Service Award at the City of Burlington's 2009 Civic Recognition Awards.
Scrap Cancer! is now a yearly event, taking place each October at the Holiday Inn Burlington from 9 a.m. to 5 p.m. The registration fee is $40 and includes a fully catered lunch, gift bags (Paris Hilton perfume is included this year), door prizes, raffle and silent auction items (donated by artists such as Kylie Minogue). It takes McKenzie a year to plan. She is always on the lookout for interesting products in magazines, at local retailers and restaurants and she contacts musicians, authors and celebrities in hopes they will donate items. She also takes the time to individually customize gift bags to best suit each scrapbooker. “I have met so many great people and am overwhelmed with some of the donations we get,” says McKenzie. “When a donation comes to the door it's almost like Christmas but even better.”
The first year more than 100 people attended. Gilchrist was one of them despite having received devastating news shortly before that the cancer had spread to her brain. The doctors gave her a year to 18 months and she passed away the following August.
Gilchrist had been to support groups at BCSS and McKenzie felt it would be a perfect fit for the Scrap Cancer! proceeds. BCSS is a volunteer based self-help organization for anyone who has concerns about breast cancer or general breast health and is the only support centre in the Halton area which deals specifically with breast cancer. They provide education and information on early detection, treatment options and ways of learning to manage the effects of breast cancer. In addition, they offer one-on-one support, support groups, holistic services, programs and a Serenity Garden.
Last year, McKenzie established and now facilitates the Friends and Family Support Group there.
“It's a wonderful facility and I am glad we went that route, donating our funds to them. I've been hooked ever since,” she says. “I help out at everything I can.”
Upcoming BCSS events include Tournament of Hope on September 16, Party in Pink on October 15 and Scrap Cancer! on October 24.
“I think it's important that if nothing else Scrap Cancer! makes people more aware of breast cancer. The whole basis is to have a good time scrapbooking your memories and keeping them and the love alive. It feels so good to be doing it,” says McKenzie. “I think Sharon would be pleased knowing that she's still with us, we have not forgotten her and would say “˜good job.'”
For more information about Breast Cancer Support Services Inc., visit breastcancersupport.org.