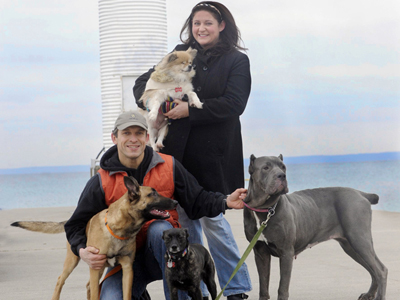 They've battled rush hour traffic to save a pup who was mere minutes from death row. They've arranged a flight from a remote native community to give a neglected dog a second chance at life. And they don't discriminate ““ having found loving homes for chickens and goats as well.

They're The Dog Rescuers and they specialize in the ones that no one wants.

“Often we get dogs from shelters that seem aggressive behind bars, but once you get them out, they're not bad at all,” says Joan Znidarec, co-founder of The Dog Rescuers Inc.

“Some are a little big and bad, but we can usually turn them around,” adds fellow co-founder Mano Krueger. “You fall in love with them in no time.”

Znidarec and Krueger met while volunteering at a Lab rescue. Three years ago the two decided to team up to launch an Oakville-based all-dog rescue, but their love affair with the canine kind began decades ago.

“I used to save everything under the sun,” recalls Znidarec. “I'd walk around with a wounded bird in a box. Everything I found, I'd fix up and let go.”

The same is true for Krueger. While growing up in his native Germany, Krueger used to share his lunch with the giant St. Bernard that petrified the other kids.

The duo work with 21 shelters throughout Ontario and take in dogs in cases of overcrowding, obedience or behavioural issues and senior dogs that are difficult to place. While the agency is based in Oakville, Znidarec and Krueger have rescued dogs from Kentucky, Ohio, Mexico and they've even saved a stray mutt from Serbia.

Since The Dog Rescuers Inc. launched in 2008 they've placed more than 1,000 dogs in forever homes.

“What separates us from other rescues is we'll take a chance. We'll give someone 110 per cent and we won't say no to a dog. We'll find someone or somewhere for them to go,” says Znidarec.

The Dog Rescuers work with about 30 volunteers, who they describe as the heart and soul of the organization.

“One of the things we're always short of is foster homes. A common thing we hear is “˜I could never foster a dog because I can't let it go.' But if they were to foster the dog, that dog has a life,” says Znidarec. “As much as we fall in love, someone else will too. By having that open door, we're able to save many lives.”

And there's no shortage of those who need saving. Znidarec says for every family in Ontario, there are three dogs in pounds.

“In some cases these dogs have been abused, neglected and have issues. They might need a little work, but the reward is incredible. Knowing you made a difference is incredible.”

And The Dog Rescuers help foster homes every step of the way, covering all expenses including food, supplies and medical care. “You just have to give them love,” says Krueger, a dog whisperer in his own right.

“We've had people call us who want to give up their dog and I work with the dog once or twice and once they see the difference they keep it,” he says. “Sometimes that happens after an hour of spending some time with the dog.”
The two are on-call 24/7, likening running a rescue to being a parent.

“It takes up a lot of our lives. I've left a wedding; I've had to take calls at a funeral. I've spent three hours in court for a cruelty investigation. I've had foster homes call me at 4 a.m. with problems,” says Znidarec.

The rescue is run on a volunteer basis and is always in need of donations. Last year, the Rescuers spent $45,000 on veterinarian bills. Without receiving any municipal or government funding, the organization depends solely on donors. “Without people helping us, we can't save dogs,” says Krueger.

Znidarec adds, “We don't say no. It's the people we are, it's part of our personalities. If we don't have room, we'll find room.”

For more information on The Dog Rescuers Inc., visit thedogrescuersinc.ca.