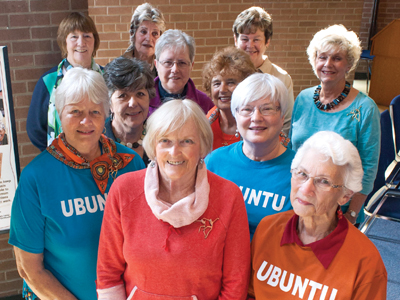 The Grandmothers to Grandmothers Campaign was launched in 2006 to help the women in Saharan Africa raise their grandchildren. With millions of children being orphaned by AIDS, there is no one to care for them but for the grieving mothers who have buried their adult children, the grandmothers. Collectively raising almost 20 million dollars for this organization to date, the contribution of Canadian grandmothers is beyond measure.

Founded in 2006 in a local Baptist Church in Burlington is one such organization. They call themselves Ubuntu. Born from the Bantu language meaning “my humanity is bound with yours,” women come together to mobilize support for the grandmothers of Africa. Predominantly grandmothers, they are a “motivated, diverse and dynamic group” according to Co-Chairperson Linda Rafuse.

A long-time Burlington resident, Rafuse had visited South Africa a year prior to joining Ubuntu in 2007. “We were on vacation, and though well aware of the poverty, we had the sanitized tour.”

With her interest peaked, it was upon her return that Rafuse read about the Grandmothers Gathering Conference organized by the Stephen Lewis Foundation in Toronto. “Grandmothers from both Canada and Africa united for their joint cause. I was moved by their mantra “˜we are strong, determined ““ we are resourceful and have the wisdom that comes from age and experience'.”

Rafuse quickly became a dedicated member of the Burlington Ubuntu chapter and active participant with grandmothers in both Canada and Africa. A believer in the power of group effort, she says, “Everyone brings her own talents of leadership, commitment, caring, strength, and creativity. The very essence of Ubuntu exemplifies who we are and what we do.”

What they do is very important work.  Grandmothers to Grandmothers work in tandem with the African grandmothers to give them the support needed as they become advocates for change. Striving for independence, they require the tools to affect that goal.

“Each project must be viable, sustainable, and provide support for the grandmothers looking after their grandchildren. These resources are invested directly at the community level ““ food, educational supplies, uniforms, school fees, medical care, HIV counselling and testing, adequate housing, bedding and support groups.”

To financially meet the demand for resources, Fundraising Events are key to Ubuntu. Working closely with Co-Chair Suzanne Burchell, Rafuse and the group persevere to create increased awareness through novel and beneficial channels such as annual golf tournaments, workshops, jazz cabaret and parades. “One of our success stories was a lovely $10 pin symbolizing friendship that resulted in being sold around the world.”

On a national level, each spring Grandmothers to Grandmothers assemble the annual “Stride to Turn the Tide” walk. All across Canada, this June groups of grandmothers join with friends and family to build awareness about the HIV/AIDS pandemic while raising funds. They walk in support of the African grandmothers who walk with purpose every day ““ to attend far-away clinics and markets, to collect water and deliver grandchildren safely to school, to provide urgent home-based care, and to protest violations of their human rights. The Halton Stride to Turn the Tide Walk has alternated between Oakville and Burlington since 2010 raising almost $300,000.

“This year the event has advanced,” explains Rafuse. “People can plan a traditional walk within their own community or participate in a Virtual Walk. We recommend local participants contact us at thebug.ca or grandmotherscampaign.org for further details.”

Raising money is an ongoing endeavour. Ubuntu has a designated planning team whose sole purpose is to create Burlington events such as the upcoming Spring Flower Workshop, Saturday May 2 at Euro Style Flower Market. On Sunday  , May 24, one may delight in A Victorian Tea Party at the exclusive Roseland Club.

Someone once said, “a garden of love grows in a Grandmother's heart.” In which case the women of Ubuntu's garden is particularly full and rich in giving.