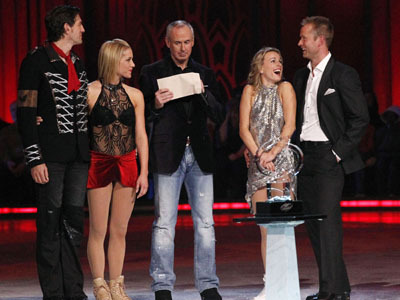 As a young kid growing up in Red Deer, Alta., Ron MacLean watched Hockey Night in Canada on Saturday nights like every hockey-crazed youngster his age. Never did he imagine he would one day be a name synonymous with the show.
In fact, MacLean doubted he'd ever attend a game at all.
“I had no more chance of going to a hockey game or Hockey Night in Canada when I was growing up than going to the moon,” the amiable CBC sports broadcaster said in a recent interview. “But I really appreciated watching Hockey Night in Canada when I was growing up.”
In the fall of 1986 MacLean made the first of what would be many appearances on the show. That was 25 years and ten Gemini Awards ago.
“It's been that long,” the Oakville resident said, laughing. “I honestly can't believe it.”
The host alongside the often controversial and always outspoken Don Cherry on Coach's Corner digs back in his memory for that first appearance on Hockey Night.
“It was October 11th and then October 14th. I did two Hockey Night in Canada games, and I lived for the first two weeks at a hotel in downtown Toronto,” he said. “I didn't know anything about the GTA, so I was a real fish out of water coming out of Alberta.”
MacLean, who got his broadcast start with a radio station in Red Deer, had moved to Calgary where he was covering the NHL's Calgary Flames. Before he knew it he was packing his bags for Toronto.
It was on the advice of a CBC co-worker that MacLean looked for a place to live in Oakville for he and his wife, Cari, over the Thanksgiving weekend. They rented a semi-detached house in Bronte before buying their first home in 1992, where they now live with their dog, Lewis.
MacLean rattles off the names of owners, waiters and waitresses at some of his favourite local restaurants ““ he knows everyone by name ““ where he and Cari spent a lot of time when they first moved to town. “They were a real help in getting us acclimatized to the Oakville scene,” he says.
A favourite spot is the Firehall Restaurant, where you'll find MacLean enjoying post-game beers with his hockey team most Wednesday nights after their on-ice pick-up games at Kinoak Arena.
Asked what he does in his spare time away from CBC duties and MacLean's first answer is hockey. He's the first to admit it's more than just a passion, and one he'll never tire of.
“No, God,” he says. “It's an addiction.” It makes hosting Hockey Day in Canada, CBC's day-long broadcast and celebration of the game, more play than work.
“It's not a hard show to do ““ it's talking hockey, it's energizing. The people around are just rink rats, like all of us, so it's a joy to do that show,” MacLean says. “Wherever you go there's a little fixture of the province and what makes the population tick, but there's always that rink and it's just so universal and so Canadian.”
He has covered numerous Olympics ““ both summer and winter ““ the Commonwealth Games, World Track and Field Championships, the Queen's Plate, World Cup of Hockey, Calgary Stampede, and most recently, is the host of CBC's hit figure skating show, Battle of the Blades.
MacLean admits he didn't expect Battle of the Blades to produce the through-the-roof ratings it has in its first two seasons. The idea of an NHLer pairing up with a professional figure skater on a reality show was something he only signed on for because he knew he would be co-hosting with legendary Canadian figure skater Kurt Browning, a four-time world champion.
“I was totally stunned ““ I sure as heck didn't anticipate this kind of success,” MacLean said. “I thought it was going to be a debacle. I only agreed to do it two years ago because I knew Kurt Browning was involved, and whatever Kurt Browning does is always good.”
The commitment and dedication of the hockey players ““ Valeri Bure, Patrice Brisebois, Theo Fleury, George Laraque and Russ Courtnall were among the competitors this season ““ surprised MacLean, too.
“I just didn't think they could ever possibly, a), put themselves out to the extent they did artistically, and b) handle the skating. I should have realized they're great athletes”¦But to do the lifts and everything else, there's so much about it that is just beyond belief.”
While Battle of the Blades has been one of the biggest surprises of his career, as far as highlights go, MacLean points to the Olympics as “bringing out the biggest thrills.”
Figure skating pair Jamie Sale and David Pelletier's gold medal at the Salt Lake City Winter Games stands out, as does Donovan Bailey's 100 metre gold medal victory at the 1996 Summer Games in Atlanta. “He was the Wayne Gretzky of all Olympians,” MacLean says.
One of his most memorable Olympic moments came at home, however, and following a family tragedy. In 2008 during the Beijing Summer Games, which MacLean was hosting for CBC, he flew home early after the death of his mother.
“It was a really tough time for me,” he recalls. “I got home and we were all getting over the passing of mom.”
Oakville being the home of Olympic paddler Adam van Koeverden, it happened he was kayaking in the 1,500 metre race in Beijing that day. The MacLeans ended up watching the race with Olympic paddling legends, including the Oldershaw family and Larry Cain, who is one of MacLean's sporting heroes.
“We all watched Adam race to silver with some of Canada's most famous paddlers,” he said. “It was a really magical night, one of those moments I'll never forget.”