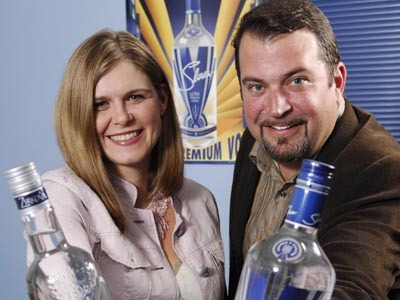 For Oakville's John and Katherine Vellinga it was a “200-step process” before they got it right. Or to be precise, 200 tastings. Theirs was an invention of a vodka, and their story is the stuff that dreams are made of.

Though the origin of vodka may be shrouded in mystery, its popularity is not. The surge of the martini over the past decade, coupled with an appreciation for the spirit's distinction has driven its growth in Canada immensely.

Dating back to the14th century, it is believed that vodka must have originated in the grain growing regions of Russia, Poland, Lithuania and Scandinavia. However, it is a small known fact that the actual birthplace of vodka is the Ukraine. Now one of the most consumed spirits in the world, it did not capture North America until the '50s, then overtook the bourbon market. Once considered a girly drink, it is now safe to say it is the spirit of choice.

The Screwdriver and Bloody Mary, cocktails often concocted for “the dog that bit you,” were the most popular vodka drinks in the '70s. It was when Clamato juice hit the shelves that the Bloody Caesar outshined its predecessor, appealing to the more refined cocktail drinker. Nowadays, many of us have adopted the approach of Eastern Europe by traditionally serving our vodka neat, or on ice with a twist of lemon. Fine vodka can be served straight up, dependent on the quality of the vodka, of course.

Quality is where the Vellingas enter the story of vodka. A story worthy of the big screen this is a true tale of how boy meets girl, get married, work as engineers, move to Ukraine, become entrepreneurs, return home to Oakville and develop into a team of vodka magnates.

Working for high-profile companies, the couple were successful engineers living a good corporate life. Then in 1997, Katherine's twin sister travelled to the Ukraine for a visit.  Loving the country, she made it her new home and Katherine missed her.

“I said to John, “˜we should move there.' It was an exciting time to live in the Ukraine. The Iron Curtain had fallen, presenting remarkable business opportunities due to the transitional market.”

For most husbands enjoying a happy, stable existence, such a proposition would prove daunting. Not to John Vellinga. “At that time I was loving our accomplishments, but I had to agree going to the Ukraine was a neat and exciting adventure. I agreed conditionally. I told Katherine if we go there, we are not just going to work on a couple of contracts. We would build a lucrative firm and leave a legacy.” And so, in true Vellinga form, they did.

Experiencing the history of a developing, emerging economy, John and Katherine collaborated to found what has become the largest private consulting firm in the Ukraine. Complementing their brilliant entrepreneurial skills, the couple contributed the best that the west had to offer to global multi-nationals and leading Ukrainian companies, such as Coca-Cola and Carlsberg.

“We added so much value to our clients, we realized we should be doing the same for our own company and brand,” says Katherine. “Then we decided it should be vodka. One of our biggest customers provided the connections necessary to source the product.”

Having fallen in love with the Ukraine, the couple was keen to take from its heritage something special to build on in Canada. “We were very appreciative,” Katherine explains, “to gain access into their world.  The Ukraine is the second largest producer of vodka on the planet, and here we knew the resources and how to find the people to make it!”

Located in a small village in the Cherkassy region, the Vellingas discovered their dream distillery, the ancient Zlatogor. Located near a pure water source, it is one of the oldest existing distilleries in the Ukraine. “One feels a sense of history when you realize you're standing in the place that vodka was born,” says John. “It is certainly different than walking into a spirit plant in Windsor.”

It was in 2001 that John and Katherine began the transition to move back to Canada. Settling into their Marlborough Court district in Oakville, they got to work. With a little help from their friends and tons of research, the Vellingas took the steps and created their vodka.

After 24 formulations and 200 blindfold tastings, Slava was born. Each bottle of Slava contains more than superb vodka; it also contains a secret. Four-times distilled and 12-times filtered, it bears all the characteristics of ultra-premium vodka.

“We decided to build our own brand of vodka from the ground up. From the trademark to the formulation, we would work with experts over in Ukraine to create the liquid, and then do the creative in Oakville,” says John.

He claims the secret to distinguishing the best vodka is establishing the perfect balance of taste and smoothness. “The key is the quality of the spirit. Our vodka is like the “˜centre cut.' Slava is ultra premium, it is in the league of the sipping martinis. It's so smooth Slava should be enjoyed neat or maybe with a tonic or soda.”

With 1.3 million Ukraine residents in Canada, the couple's intent was to serve the Ukrainian population. Originally advertising in Ukraine cost-effective markets, the Vellingas received an overwhelming response. So much so the LCBO got wind and soon became their gateway.

“A key decision in our company's history was submitting our own vodka brand to the LCBO, which is absolutely an audacious thing to do!” exclaims Katherine. “Then we went on to win the prestigious Elise award for marketing, which is equal to an LCBO Oscar.”

Within a year Slava became a resounding success amongst the cognoscenti of Canadian vodka drinkers. With the LCBO, the little company that could found themselves with a national market. Though their company was small, the combined commitment and sheer energy of the Vellingas proved a powerhouse.

The secret to their vodka's success is two-fold. The quality is the obvious one, the second being the price-point. Though beautifully designed in a freezer-friendly art-deco bottle, it is this bottle that allowed the market to enjoy ultra-premium vodka at just a few dollars more than a regular brand.

“We have saved consumers almost $20 by sourcing a local designer who moonlighted to create the original design and label,” says John. “Sophisticated vodka drinkers don't require the reassurance of expensive packaging.”

Before the Slava dust could settle, the LCBO were asking for vodka. Just shy of a year, and along came Zirkova…

John was ecstatic. “The LCBO wanted a less expensive alternative, so we submitted an authentic European style, smooth vodka with a little bit of a kick to it. Russians generally prefer stronger, harsher vodka and appreciate it in a different way. Zirkova is still smooth, but not like Slava ““ Slava is ridiculously smooth. Zirkova has more presence and acts like a flavour enhancer to a mixed drink.”

With their vodkas on the shelves of 130 LCBO stores in select provinces, the couple are known as the “Vodka Barons.” But home-based John and Katherine are keeping life simple. In fact, they say there are now four Vellinga babies: two kids, plus Slava and Zirkova. A perfect evening at home includes a roof-top fondue, a Slava Martini for John and vodka cocktail for Katherine.  I like to explore,” she laughs.  Right now I'm into the Candy Cane!”

Admitting it has been a roller coaster of a ride, Katherine says it's an adventure they would not trade for the world. Grateful for the amazing community support in getting their vodka on the shelves, they see a bright future with what they love to do and with the people they love to do it with.

What's next for the Vellingas? “Well, I think we have one more vodka in the mix,” smiles John. “Budmo!”

What makes a “¨perfect martini?

Here are a few tips, courtesy of Slava Vodka.

â™£ Use only high-quality vodka
A martini is only as good as its main ingredient: vodka.

â™£ Chill glasses
While mixing your martini, fill glasses with ice to chill before pouring.

â™£ Make your own flavours
Flavoured vodkas often contain artificial, sickly-sweet additives and are often not made with the best quality spirits. Instead, use Slava Ultra Premium vodka and add your own natural and fresh ingredients.

â™£ Use a shaker
To better infuse your martini with a flavouring like a twist or zest of lemon or another ingredient, use a martini shaker to mix.

â™£ Shake thoroughly, but not hard
The purpose of a martini shaker is to chill the drink and mix the contents. Use a gentle circular motion. Too much shaking will cloud the drink with ice shards.

The Classic Dry, Shaken Martini
In Slava's version, there is no vermouth. Slava has a slight sweetness due to natural residual sugars. You can add vermouth to make it less dry by coating the inside of the glass prior to pouring, a spritzer bottle is suggested.

Pour 2 oz. of Slava and a scoop of ice in a cocktail shaker. Shake until thoroughly chilled. Strain into a chilled martini glass. Garnish with olives on a swizzle or a twist of lemon on the rim. Directions are for one serving. Double for two.

A Twist on the Classic
Add lemon zest in the shaker for some zip. Flavour is gently infused during the shaking.

The Dirty Martini
Add a few drops of the olive brine. This creates an intense olive flavour.

Slava Cantini (Pomegranate Martini)
This is a delight, a perfect and festive balance of fruit and tartness.

1 ½ oz Slava Ultra Premium vodka
1 ½ oz  pomegranate/blueberry juice
1 ½ oz white grape juice
Pour all into a shaker. Add a twist of lime and a scoop of ice. Shake until chilled. Strain into a chilled martini glass. Garnish by dropping in several pomegranate seeds. Directions are for one serving.

Cinnamon Heart
It tastes exactly like a cinnamon heart.

1 ½ oz Slava Ultra Premium vodka
1 ½ oz cranberry juice
a drop (not too much) cinnamon schnapps
Pour all into a shaker with a scoop of ice. Shake until thoroughly chilled. Strain into a chilled martini glass. Garnish by dropping a cinnamon heart into the glass.

See it Live!
Slava Vodka will be sampling their premium vodka at West of the City's annual holiday Girls Night Out on Wednesday, November 24 at the Oakville Conference Centre. Doors open at 5pm, tickets are $10 plus a non-perishable food donation for the Mississauga Food Bank. Tickets are available at the door or at Formula Media Group/West of the City. Call 905.845.8536 for more information.