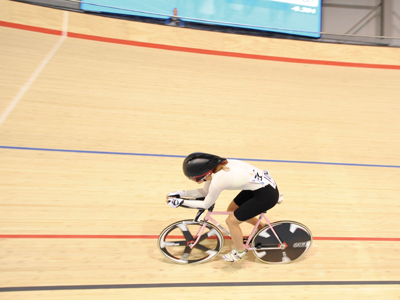 Looking down the steepest portion of embankment at the Mattamy National Cycling Centre (MNCC) it's difficult to imagine how anyone ““ man, beast, or cyclist ““ could seemingly defy gravity and remain planted on the 42
degree bank.

Of course, it all comes down to some very complicated-looking mathematical equations (which will be avoided here, thank you very much) but in essence the embankment enables the rider to use minimal steering effort and, when reaching speeds above 30km/h, gravity takes care of the rest, holding riders firmly in place.

But that's not nearly the half of it and the more you learn about indoor track cycling the more its seemingly dare-devil nature intrigues.

Riders can achieve speeds of 70km/h (which typically occurs during the last 200-metre dash to the finish line) but super-humans will be happy to know the track is certified up to 85km/h. The stipulations of a track bike also seem to have been invented by a madman: “It shall have no brakes, a single gear ““ and get this ““ the pedals will not be able to freewheel, riders will have to slowly push back against the pedals to stop!”

Madman or not, every indoor track bicycle must adhere to all of these stipulations (or lack thereof) and more: Water bottle racks, digital gauges, and pretty much any other feature other than rider and bicycle are strictly forbidden. But there is method in the madness; all of these external stimulants, however minute, can be distracting and can easily lead to falls and injuries and other horrible maladies that are only exacerbated further by hard wood and steep inclines.

“You need to concentrate 110 per cent on what you are doing on the track. You cannot glance down at your speedometer to check your speed because if you do you will cross wheels with somebody in front of you and take down three riders and there will be a lot of injuries,” says Hamish Gordon, a road cyclist-turned-track cyclist who was preparing to ride the track the day we visited. “You get on the track and the only thing you do is peddle and focus.”

Designed chiefly as a world-class cycling facility the Mattamy National Cycling Centre (also known as the Milton velodrome) is the ultimate mecca for cyclists. The 250 metre-long track is constructed from rock-hard Siberian Spruce and is the sole indoor cycling track in the country ““ and just one of two in North America ““ made to meet the stringent requirements set by the International Cycling Union (UCI). Because it meets these regulations the Milton velodrome can play host to Olympic, Pan-Am and all other world-class cycling championship racing. The VELO Sports Center at the StubHub Center Complex in Carson, CA is the only other indoor track on the continent capable of hosting similar world-class cycling events.

Luckily, track usage is not limited just to the pros. Anyone aged ten or older can hop on the track after a completing the “˜Track Certification A' and “˜Track Certification B' training sessions at a cost of $25 each. Riders can also receive track certification by signing up for the “˜Intro to Track Cycling' program, which builds knowledge and  track riding skills through a structured program that consists of eight classes ($110 for youth; $147 for 19+).

Once riders have completed the preparatory training sessions, which last about three-to-four hours in total, they are free to take to the track in various capacities through drop-in sessions available throughout the week (ranging from $15 for one session to $360 for 30 sessions for adults), or a myriad of “Ride the Track” structured programs like “˜Track Cycle Fit,' “˜Structured Track Training' or “˜High Performance Track Training.' It all depends on how casually or competitively riders would like to participate. All “Ride the Track” programs are eight weeks each and range in price from $205 to $272 for adults.

Before you start prepping your road-bike or mountain bike be warned, track bikes are the only type of bike allowed on the velodrome. But fear not. In order to encourage newbies the Cycling Centre will rent all the necessary equipment beginners need to hit the track. The rental prices ($10 for a bike, $5 for a helmet and $5 for shoes) make it easy for beginners to finally get their wheels on the wood.

New riders can also rest assured knowing that when they finally hit the track their “Ride the Track” sessions will be taught by the experienced professionals of the Milton Cycling Academy (MCA) and chief among them is Steve Bauer, MCA head coach and program director at the MNCC. In truth, “experienced professionals” is a bit of an understatement.

Bauer, 55, won the first Olympic medal in road racing for Canada, taking home the silver medal at the 1984 Olympic games in Los Angeles, CA. He has also competed in 11 Tour de France's, placing 4th overall in 1988.

Having retired from professional racing in 1996, Bauer today has focused much of his attention on crafting the next generation of Canadian cyclists, both Olympic hopefuls and casual riders alike.

“The beginning is to facilitate cycling use of all ages and abilities ““ that is the first step. It's been extremely successful and the demand is high. In the first two-weeks, mainly weeknights and weekends, we rented out almost 700 bikes. Including those who brought their own bikes I would estimate we put close to 1,000 people on the track [in that time],” he says.

As chief program director Bauer says he must be careful to balance the variety of programming on offer. Although the MCA and MNCC are looking to breed the next generation of Tour de France hopefuls, the success of the velodrome also rides on its ability to attract newcomers to the sport.

However, as visitors to the Montreal velodrome can attest, a cycling-specific facility requires more than just a track to sustain its longevity. The Montreal velodrome was created for the 1976 Olympic games but after the games had come and gone the facility fell into disrepair and, after years of reconstruction, reopened in 1992 as the Montreal Biodome. Today, bats, puffins, starfish and other animals occupy the space.

In order to avoid this type of scenario, the $56-million Mattamy National Cycling Centre was also designed as a multi-sport recreation facility and features a 300-metre walking/jogging track, a fitness centre, a yoga/pilates studio, concessions, a bike shop, and several multipurpose rooms available for rent. Aside from the stunning velodrome itself, the best part of the MNCC is the gymnasium. Located directly in the middle of the facility, the gym can be used for basketball games, volleyball games, badminton, group events and even trade shows. Fully surrounded by the velodrome track, it is definitely a very unique area to play, or an event.

With the Pan Am Games (July 10 to 26) and the Parapan Am Games (August 7 to 15) just around the corner, the velodrome will be closing its doors to the public at the end of May, reopening in September. Tickets for the Pan Am Games Track Cycling events range in price from $40 to $140 (kids under 16 and adults over 65 can purchase $20 tickets for certain sections and events).

Although the Pan Am and Parapan Am Games will be an undoubtedly riveting experience, the best part is the knowledge that such a world-class facility exists right in our backyard. I challenge you to type “2015 Pan Am Boulevard” in Google Maps. Once there, take a stroll around the walking track to the steepest portion of the embankment and look down ““ has terrifying ever been this tantalizing?