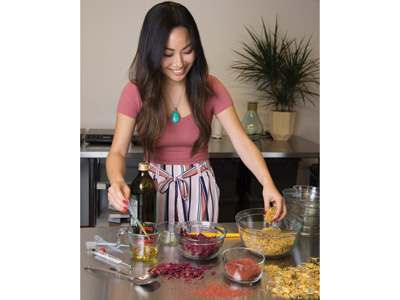 “It became a passion for me, and I saw this hole in the market where there weren't many masques”¦ there's always a line of products with one masque,” she says. “There wasn't anything that I could direct people to to get them interested in using a masque, so I talked to Elie and he was on board ““ that's how it all started.”

And so the first seeds of Artifact Skin Co. were sown. Products include a Skin Booster, Skin Tonique, lip balms, the new Konjac Facial Sponges (the only product the couple outsources) and of course, a heavy focus on masques of all types. All products are made with natural ingredients, save for a preservative in the masques. “We are working on a new formulation [for the masques] that will come out, hopefully, before Christmas, so they will be 100 per cent natural ““ but right now they are 99 per cent,” says Kim.

These natural ingredients are sourced from around the world and include Amazonian white clay from Brazil, monoí¯ from Tahiti and glacial marine clay from British Columbia, each created to tackle a specific skin care need.

What results is a luxurious line of artisanal products with a sort of cult following that began almost immediately from the company's inception just two years ago. “Six months into the start of our business Monaco Magazine contacted us as well as Vogue Germany and Vogue France,” says Kim.

This coverage catapulted the brand onto the shelves of numerous European retailers, like The Conran Shop in London, England. “They were the first ones to pick us up, and from there it was a French retailer,” says Nehme. “We've been very lucky that we haven't had to do too much hustling.”

“We found that a lot of people in Europe view the Canadian products on a different level that we don't typically notice,” says Kim. Nehme adds, “People tend to admire things from other places.”

Much in the way that the couple adds to one another's thoughts, they tend to play off of the other's role within the company. “[Narae] is basically in charge of product development,” says Nehme. “She's the one that comes up with the ideas and what we're doing next and I begin the process of designing the packaging.”

Noticing that naturally-focused skincare products typically fell into a generic, pared down design aesthetic, Kim and Nehme decided to create a naturally inspired line with a high-end feel. “We wanted to create something that was a great product but also really fun.”

The playful packaging maintains an air of opulence and a clear theme.

“We were trying to pick a sun-washed colour theme,” says Nehme. “I would describe it as if these things had sort of landed on a beach. We try to look at what the actual product looks like and hint at those colours.” Kim adds “And also, the feel that you get from the name of the product, like Egyptian Honey Rose. Certain things, when you look at them, a colour will enter your mind.” Nehme continues, “We designed the packaging for months, and the way we brought it all together is that these masques are based on natural ways to care for your skin from different places around the world. We called the company Artifact based on that idea ““ these are artifacts from different places around the earth. We sort of imagined these buoys floating in the ocean”¦ very conceptual, but we went with it.”

This September the duo will be expanding on their product offerings with the launch of their first haircare line inspired by the Tahitian Vanilla Monoí¯ masque and placing a focus on monoí¯ as the star ingredient. Included in the line will be a Hair Masque, Texturizing Hair Mist and a Repairing Oil that are meant to be used together, “sort of like a little hair set,” says Kim.

On November 19 you can catch Artifact Skin Co. at the Makeology Holiday 2016 Market taking place at the Hamilton Museum of Steam & Technology.

Topsellers
The couple agree that the Glacial Clay and Egyptian Honey Rose masques are their most popular products, with Kim reasoning that “They are on opposite ends of the spectrum ““ one is more detoxifying, pulling out from the pores, while the other is adding to your face; adding hydration and radiance.”

Process
“We always start at night,” says Kim. “We found, for us, more task-oriented things are for mornings. When we start designing or making a new line it always starts at midnight.”