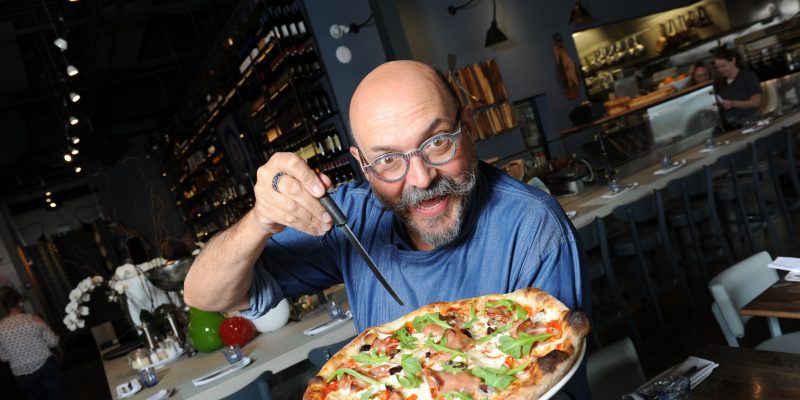 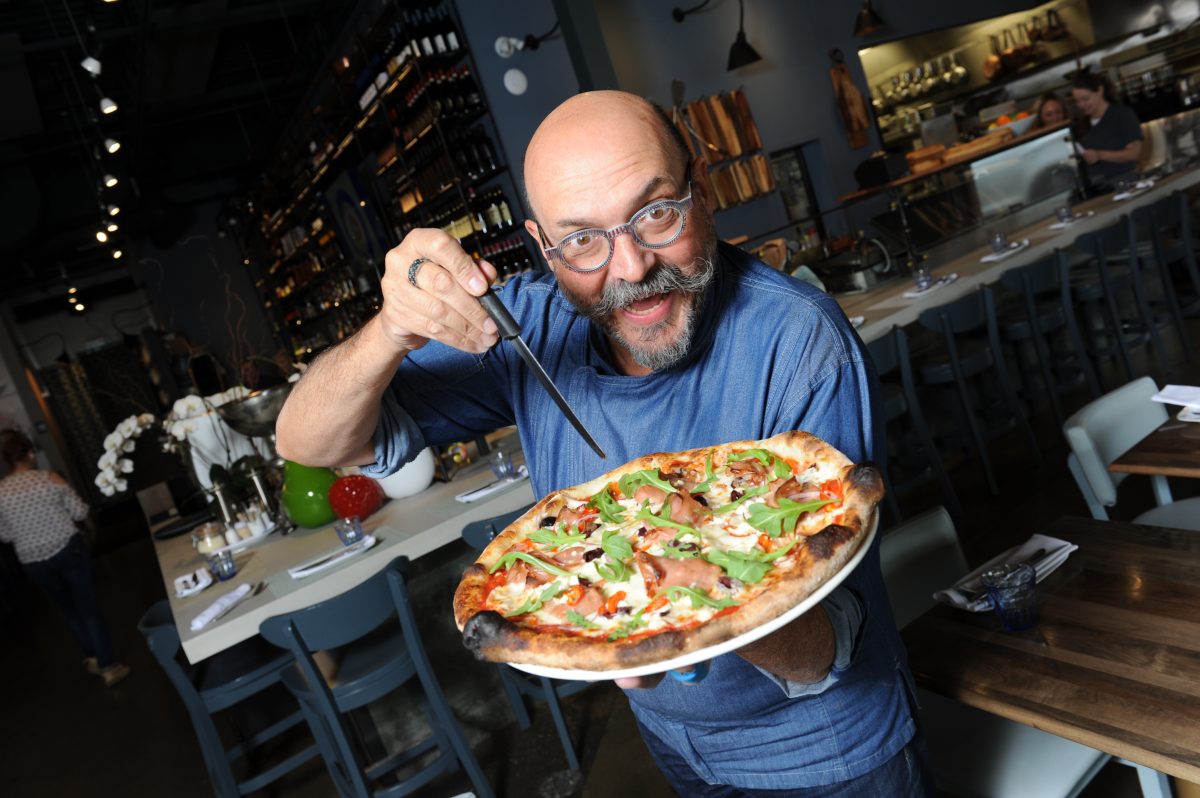 Massimo Capra owns Capra’s Kitchen in Mississauga, and he’s at the restaurant almost every day.

Capra has become a household name thanks to the Food Network and television shows such as Restaurant Makeover, Chopped Canada, City Line, Anna Olsen’s shows and Table for Two. A warm favourite uncle personality and anti-arrogant chef persona translates well to the small screen.

“TV is good, and I did what I needed to do,” Capra says from a table at his Clarkson Village restaurant while answering calls from City Line and Instagramming today’s pizza special – grilled eggplant – after carefully examining it. Social media, however, he’s not as fond of but it’s a requirement of the times.

Yet not a necessity. “Our demographic, over 40, isn’t glued to social media,” he says. “Let’s just say they’re not going to hit any telephone poles staring at their phones.”

Capra knows this neighbour well, though that might surprise some residents. He’s lived in the area more than 20 years, raising two kids and managing his Toronto and Niagara Falls restaurants from here. Capra has licenced his name to two restaurants: Boccone at Pearson Airport’s Terminal 1 and Soprafino at the Hamad International Airport in Qatar — yes, he’s now an international name. Most recently Massimo’s at Fallsview opened in Niagara Falls, though Capra’s Kitchen is his baby and focus — or as focused as a high-energy over-achiever can be.

“I’m a neighbourhood guy,” he insists. “This is a pizza and pasta place, served in a curated way. Nothing is premade and that takes a lot of training in the kitchen.” Comfortable, casual and a bit cheeky, Capra’s Kitchen has a sleek upcycled interior with combination table, bench and high-top seating like a trendy food market. Signature mustache logos dot the marketing creative. Trendy light bulbs with crystal candy-dish shades dangle from the open industrial ceiling. A bar lines one side of the restaurant, and imported quality virgin olive oil bottles sit on tables as condiments.

Capra proudly points out evidence of the oil’s Italian origins on the bottle. “I spend money on things I shouldn’t,” he laughs. But genuine, honest food living up to Capra’s standards is the core of Capra’s Kitchen.

“We feed people,” he says with a shrug when asked about his ‘art.’ “I don’t buy into foodie feuds or trends. Our food doesn’t have ‘stories’ and isn’t stirred so many times. I don’t like to BS people. If they want to know what’s in a dish, I tell them. If they want the recipe, I give it to them.”

Capra’s Kitchen is about traditional Italian food, Capra says, but not traditional North American Italian food. “I didn’t want to open another Italian restaurant per se,” he says. “I wanted to open a great eatery.” And not an urban eatery associated with deep pockets and white linens similar to other ventures.

Capra’s Kitchen was to be this chef’s second home, and in turn, where customers feel at home. Tables of patrons call out, “Massimo” when they see him, comfortable on a first-name basis and very familiar with a person they’re meeting for the first time. Meeting Capra is part of the experience here.

When your name is Massimo Capra, born in Northern Italy, then making Canada home in 1982, your menu is going to reflect your heritage. People expect it. Therefore, pizza, pasta and creative greens it is.

Want to be blown away? Select the special. Whatever it is. Grilled eggplant pizza or creamy assorted mushroom linguini.

Want to share? Pass around some small plates to start, such as crispy artichokes and mushrooms, lobster crocchette, fresh herb hummus or labneh because sometimes you have to shake up. Or order a sharing board for the table — either assorted cheeses or salumi with marinated olives and house-pickled vegetables. Hooking Clarkson on ‘family style’ is a goal.

Family dining is, of course, associated with Italian traditions and food important to the culture.

“Many contestants on Chopped Canada say, ‘Food is very important to my culture,’” Capra says. “But tell me one culture where food isn’t really important. Some areas have advantages of geography, but food is important to everyone.”

“Italy is a very special place,” he says. “Unlike many other countries that have a central culture, Italy is a copulation of hundreds of different cultures all speaking the same language and they all have their own ways. Cuisine will change from one village for the next. Ten kilometres down the street, they have a different way of preparing pasta.”

And tomato sauce and garlic? Apparently, we use a lot here — more than in Italy.

“But,” Capra points out, “you must react to market demands.” Or, in this case, neighbourhood demands. When Capra saw this Lakeshore Road space available, the site of a family-run Italian restaurant for decades, he knew Capra’s Kitchen had found a home — one very near his own.