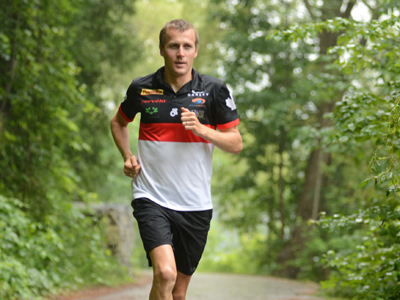 Having just been named to the Canadian Triathalon Team for the 2015 Pan Am Games, Kyle Jones is hoping to take
a spot on the podium in front of his home town crowd.

From a young age, he was exhilarated with the feeling that came with running; his feet pounding the pavement in a steady rhythm and the sound of his own breath echoing in his chest. Starting in elementary school in Burlington, he ran cross-country and took part in track and field and that continued through to his high school days in Oakville.

It made sense that he was drawn to athletics. His father, Doug, was involved in the 1984 Olympics in Los Angeles as a coach with Canada's canoe team and again in 1988 in Seoul.

“He always encouraged me to play a whole bunch of sports growing up (including team sports such as baseball and hockey),” says Jones, an Olympic athlete who represented Canada at the 2012 London Games.

He discovered his true passion and the sport he wanted to focus his athletic endeavours on ““ the triathlon ““ when he watched his father take part in one for the first time. Doug started competing in the multi-discipline race that combines running, cycling and swimming as a way to stay fit, and getting to watch his father race instilled a deep and passionate love of the sport in Jones.

“I got the bug watching him,” says the 30-year-old. “I remember going to races and seeing him and wanting to emulate him.”

Around age 10, he signed up for his first triathlon for youth known as Kids of Steel.

The athletic competition was, as Jones notes, a way for him to spend even more time with his dad and the two were able to further strengthen the father-son bond through the endless hours spent training together.

When he hit his early teens, he began to take the sport more seriously. He won the Canadian junior title in 2003.
A year later, he was invited, along with a few other young triathletes, to join famed Canadian Olympian Simon Whitfield at a training camp he was organizing. Whitfield won a gold medal four years earlier at the 2000 Olympics in Sydney, Australia.

The whole experience was quite a thrill and, in many ways, an eye-opener for Jones.

“At the end of camp, he pulled me aside and gave me the opportunity to stay longer,” says Jones, who wound up spending close to two months with the gold medalist, until Whitfield left to compete in the 2004 Olympics in Athens.
Jones had always dreamed of competing in the Olympics, of proudly wearing the red maple leaf while representing his country.

The time with Whitfield served as a serious confidence booster for him. Being exposed to an Olympic-quality training environment helped him understand just what it would take to become an Olympian and to take his efforts to a higher level.

“That was when I knew if I kept on track and kept working hard, the dream could become a reality,” he said.
In 2012 in London, his dream came true when he competed for Canada in the Olympics.

“It was a huge accomplishment just getting there and the whole experience certainly left me wanting more of it,” he says.

That year was a big one for Jones. Not only did he compete in his first Olympics but he also won his first Canadian senior title, as well as his first International Triathalon Union (ITU) World Cup title.

Jones, who is married with a young son and recently moved to the Welland area, trains under the watchful eye of coach Joel Filliol.

Pan Am 2015
With the Pan Am Games set to take over the GTA (July 10 to 26), Jones is hopeful he will have the opportunity to medal so close to home.

“It would certainly be a special and unique opportunity,” says Jones. “It's a home race and a home games and that's something not a lot of athletes have a chance to do. To have the opportunity to race in front of friends and family and the people who have supported me my whole career would be something special.”

It would also, in a sense, offer him a shot at redemption. He has competed in two previous Pan Am Games, finishing fourth in 2007 in Rio de Janeiro and again in 2011 in Guadalajara. The goal during competition is always to medal, he says, and the Mexico competition left him somewhat frustrated as he felt like he was in a solid position to not only medal, but potentially win the race.

But, such is sports. As the old adage goes: you win some, you lose some.

Meanwhile, he has already set his sights on competing in his second Olympic Games when they take place in Brazil in 2016. He has been training hard and racing with an eye on making the Canadian squad that will head to the sunny climes of Rio de Janeiro, basically since the 2012 Olympics drew to a close. He's eagerly anticipating on building on his finish in London.

He wants to medal. But, he feels that if he can leave Brazil knowing that he gave everything he had while competing against the best athletes his field has to offer, he will be content.

Living Local
Born in Hamilton, Jones lived in Burlington until he was 10 before moving to Oakville. He considers the latter his hometown after spending his formative years there.

“It was a pretty amazing city. All that lakefront across most of the city. It also has a really great trail system in place along with all of its parks. You can pretty much ride or run anywhere.”

He fondly remembers growing up in the town and now, as a grown man with a family of his own, thinks about what a wonderful community it is for kids and families. Bronte Creek Provincial Park was one of his favourite places to go to as a youngster and he remembers taking part in some of his first runs there.

“Oakville is a great place to live and is such a beautiful setting.”

Surviving as an Athlete
Finding the money to be able to train and compete has been an issue for many athletes over the years. Elite-level athletes who are good enough to test their mettle against the best in the world often tell stories about how they have to hold other jobs just to pay their bills when, in a perfect world, they would be able to train full-time. Clearly, sponsorship plays an important role for these athletes.

Jones has a number of sponsors, including ASICS, PowerBar, Cervelo Cycles, Maytag and the National Watermelon Board. The latter, he notes, is particularly appropriate to be his sponsor.

“It's pretty fitting considering how much watermelon our family eats,” he says. “Watermelon really is a good way to hydrate, especially on hot summer days.”

He also receives financial support in the form of a bursary from the Team Investors Group Amateur Athletes Fund.
Sponsors, in general, are “crucial” for an athlete, he says. While he does receive some funding from Triathlon Canada, and can also earn prize money by competing in the ITU World Triathlon Series, the sponsorship money really helps.

“I've been fortunate to partner with some industry leading companies that have stood by me for years.”

Triathlon at a glance
At the Pan Am Games, men and women complete a 1,500-metre open-water swim,  40-kilometre road cycling course and a 10-kilometre run.

Canada's best known triathlete
Simon Whitfield came onto the scene at the Pan Am Games in Winnipeg in 1999, where he won a bronze medal. The next year he blew away the field by taking home the gold medal when the sport debuted at the Olympic Games in Sydney.