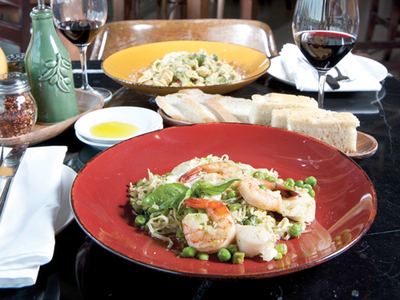 It's difficult to define the recipe for success in the restaurant industry. Certainly it begins with a large quantity of commitment; equals parts time and customer service, but the unique flavour of a restaurant is a combination of atmosphere, style and of the moment menu selections that can only be accomplished by taste.

Doug Greco, president and owner of Catch Hospitality Group is the man with taste behind one of Oakville's destination fine dining restaurants ““ Cucci ““ as well as casual tapas-style Plank on Bronte Road and the ever-popular pub The Firehall.

Operating behind the scenes of the front of house operations at his four restaurants is Catering by Heat, offering private and corporate catering services.

The fourth and latest addition to the Catch roster is Tavolo. Located in the newly renamed and renovated South Oakville Centre (you knew it as Hopedale Mall), the recipe at Tavolo is handwritten in Italian, and the new eatery is poised to serve a new and evolving clientele and neighbourhood in south Oakville.

“I live a block from here,” says Greco, sitting at a high-top table with a view across the dining room at Tavolo. “The neighbourhood is changing, there are lots of young families, and the mall is changing. It just seemed like the right time to open a new concept in this part of Oakville.”

“People ask me why they would go to Tavolo instead of Cucci, but each restaurant is different. It's a different experience at each location,” he says.

For Tavolo (table in Italian) the concept is authentic Italian, and a menu peppered with hand-made pasta, authentic Neapolitan-style pizza, and rustic homestyle dishes. Tavolo also features “family-style” menu options. This style of dining is perfect for larger groups, with a selection of large dishes of your menu choices to pass around the table, just like you would at nonna's house.

Chef Bruno Di Sarno is at the helm of Tavolo's kithen. He was sous chef at Cucci for three years before taking on the task of developing the authentic Italian menu for Tavolo.

Di Sarno talks about food with passion, and a charming Neapolitan accent. He grew up in Naples, where he learned about preparing and serving food around the Italian table.

In Tavolo's open kitchen, Di Sarno and his team are busy making Coccio alla Sorrentina (hand made potato gnocchi with tomato sauce and mozzarella) and Tagliolini Limone (tagliolini with shrimp, scallops, pear and lemon mascarpone). A charcuterie board appears, fresh burrata spilled across the plate alongside a grilled peach.

The “local” charcuterie on the plate is certianly that. If you enter the restaurant from the interior of the mall, you'll be able to peer through the windows into Chef Di Sarno's enviable larder, filled with his own house-made braesola, pancetta and cheeses.

Beyond the entryway flanked by a wall of uniquely displayed wine, and the peek in the pantry, Tavolo opens up before you. It's a soaring, open space grounded with rich, warmly textured wood, large-scale metal light fixtures and a perfectly mismatched combintion of furnishings. It's one of those spaces that feels at once collected and uncluttered, but most importantly warm and inviting, with a glass waiting to be filled with wine.

As the chef and I chat about Naples, and the merits of his imported-from-Italy pizza oven, a voice from the kitchen calls out, “Chef, the cake!”

“Ah, the chocolate cake is done.” And with the waft of tonight's dessert drifting from the kitchen, and a kiss on the cheek, he's gone back to the kitchen to prepare another night's feast for senses.