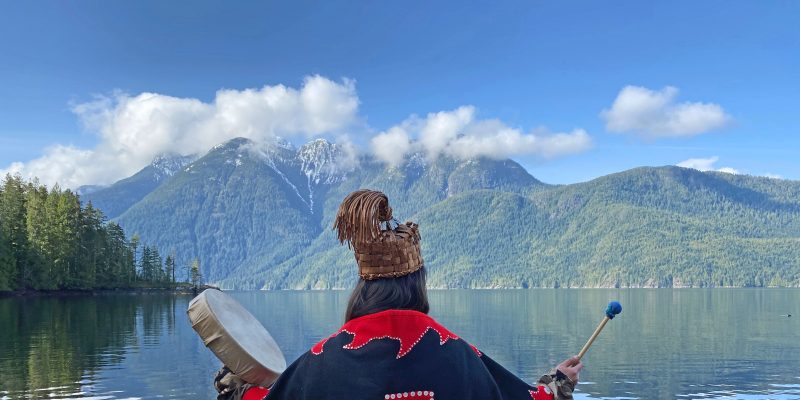 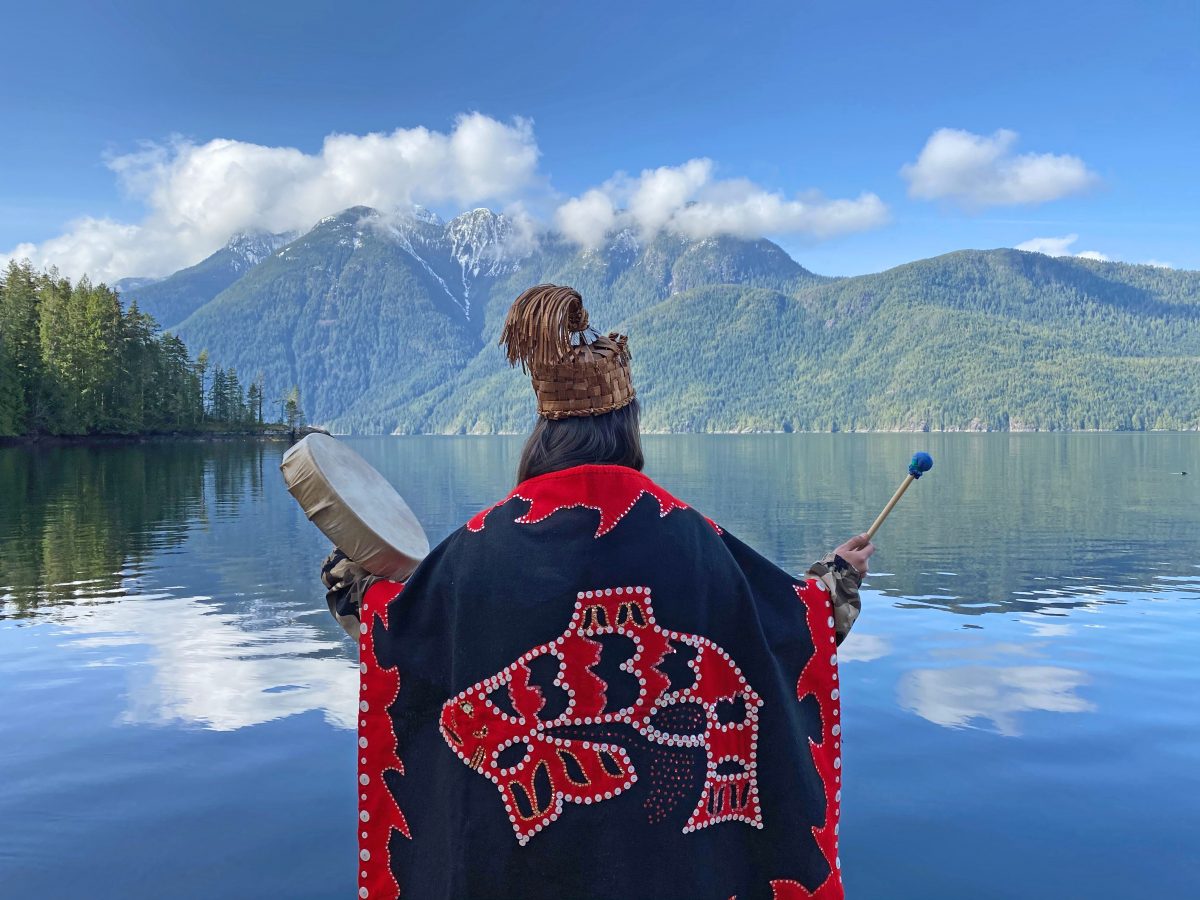 The grizzly bear was close enough to watch it chewing.

It sat chest deep in the shallow river, gripping a chum salmon in curved claws as long as my index finger. The bear looked almost thoughtful as it stripped the skin from the fish with its teeth.

It was certainly more interested in the salmon than the eight visitors and pair of guides watching and taking photos from a nearby wooden viewing tower. The grizzly let the half-eaten fish slip into the water and lumbered along the riverbed to catch more.

“It’s not a zoo,” guide Cheyanne Hackett of the Homalco First Nation explained before we set out that afternoon on our first day of grizzly bear watching. “We are the animals locked in the cages and the bears are wild.” 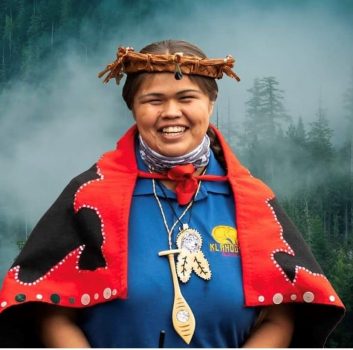 We were on the traditional territory of the Klahoose First Nation in coastal British Columbia, where the Nation has run grizzly bear tours in Desolation Sound off the northern tip of the Sunshine Coast since 2016.

In 2020, the nation’s business arm Qathen Xwegus Management Corp. purchased an off-the-grid former fishing lodge in a remote corner of Homfray Channel. The property reopened in May 2021 as the all-inclusive Indigenous-owned and operated Klahoose Wilderness Resort.

Located about an hour from Lund B.C. by boat, the eco-resort was our base for an all-inclusive, three-night stay. During the August-to-October salmon run, three-hour stints of grizzly bear watching on two separate days are also included.

Situated in a deep water cove and surrounded by forest covered mountains, the resort feels immersed in nature and removed from everything. Our time there was much more than the bear viewing. It was a culturally rich, relaxed experience infused with Indigenous storytelling, traditions and craftwork. 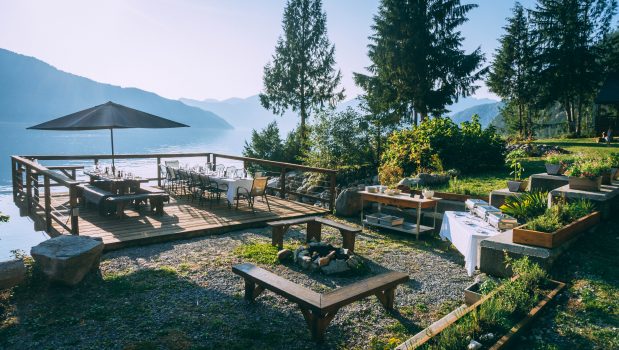 We arrived to hear a welcome song and drumming from the resort’s cultural ambassador, Klemqwateki “Randy” Louie. He designed the property’s black, red and white grizzly bear logo and carved the smooth yellow cedar paddles hanging in the expansive great room of the 6,100-square-foot cedar lodge.

Louie’s paddles are also in the resort’s four lodge rooms and three cabins, all of which are decorated with Indigenous art, including fabrics by Coast Salish artist Simone Diamond. The cedar-walled spaces are rustic, with luxurious touches.

With an average of 12 and maximum of 24 guests at the lodge (there were just eight people when I was there), we got to know each other and our Indigenous hosts over these few days. 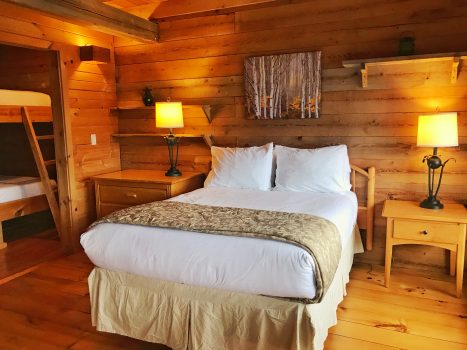 Outside of the grizzly watching, there was no set programming. With comfy oversized furniture and a cozy woodstove, the great room was a favourite gathering place. Louie showed us his carving tools, answered questions, shared stories and talked about his art.

Weaver Anita Noble, head of resort housekeeping, made the traditional cedar hats on display in the lodge. She patiently showed us how to weave and twist strips of cedar bark into a rose. We learned the cedar tree has great significance to West Coast First Nations people and Noble explained she thanks the tree with words and a tobacco offering before she peels the long, narrow strips of bark.

We started the day with morning yoga on the dock, our arrival sending nervous harbour seals tumbling into the ocean. It’s a favourite place for them to elude the Bigg’s killer whales (also known as Northern transient orcas) that hunt them. More than a dozen seals would be lazing here each morning after overnighting on the dock. I could hear their comical huffs and snorts while stargazing from my balcony.

Guests eat their meals together. The Klahoose name means “bottom fish,” so local halibut was naturally on the menu, along with sidestripe prawns pulled from a deep water trap off the dock. We also had chicken, risotto and excellent hearty breakfasts to start each day. 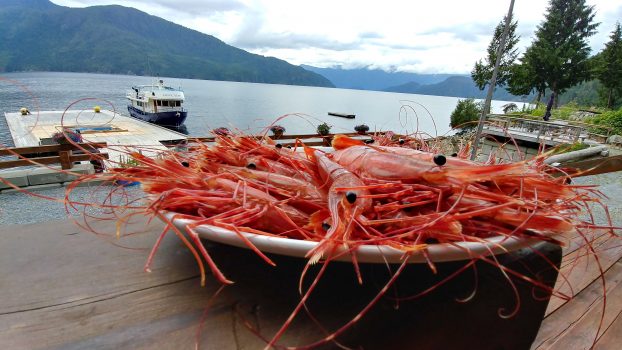 One morning, Klahoose Nation member and lodge caretaker Stephen Whitmore took us on a short hike through the electric green rainforest to a rocky viewpoint on the resort property. Boat skipper and grizzly bear guide Leon Timothy of the Tla’amin Nation near Powell River spent two weeks creating this well-designed trail. The ground was spongy underfoot. The air smelled of cedar and spruce.

“I feel like my world has expanded,” said visitor Margo Viner of Squamish B.C., who was travelling with her husband, Norm. “I feel I can breathe more deeply here. It has inspired me and my curiosity. I want to learn more and not only about this (Klahoose) Nation.”

The resort is open from May to mid-October. Summer visits focus on water activities, including kayaking, swimming and stand-up paddleboards. Guests can watch for whales, dolphins, seals and eagles amid breathtaking scenery on boat rides. The resort took delivery of a sturdy 12-seat catamaran in September. It’s named Goat 1 for the mountain goat, which holds a sacred place in the Klahoose Nation’s identity. 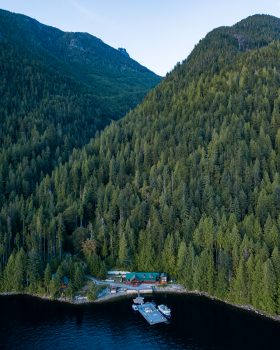 Towards the end of summer, the spotlight turns on the bears.

The hourlong boat ride to Toba Inlet for our first day of grizzly watching started out on auspicious note with the sighting of a bald eagle.

“In our culture, to see an eagle first thing in the morning, you’re going to have a good day,” said Timothy. He steered the boat past mountains, forests and thundering waterfalls, stopping to drift so we could watch a humpback whale gracefully surface and dive.

Hackett greeted us at the dock. She put on a brilliant red button blanket sewn by her grandmother and a woven cedar hat topped with a blue Russian trading bead, then drummed and sang the Women’s Warrior Song in her language to honour missing and murdered Indigenous women and girls.

During the short bus ride to the six viewing towers, Hackett explained the work being done here with grizzly research programs. DNA is gathered from fur samples left by bears after they scratch itchy spots on trees wrapped with barbed wire to snag hair samples. She detailed bear behaviours, including how the males churn their paws into the soft banks of the river, leaving a scent-marking urine trail so females can choose the strongest mate.

Bears eat medicinal plants for everything from aiding a cub’s digestion to calming arthritis, Hackett said. 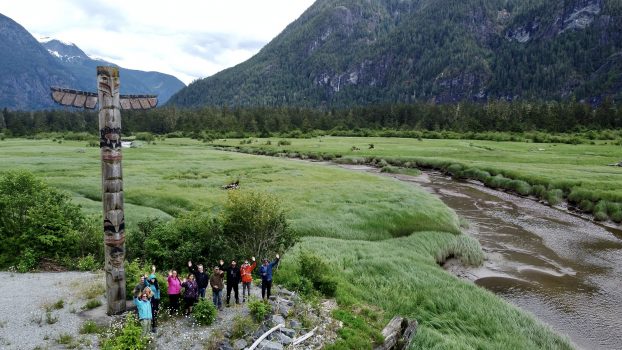 “Our people used to live alongside the grizzly bears for over 10,000 years and we would watch what they would eat,” she said. With a few exceptions, anything grizzly bears can consume, humans can eat as well.

Timothy warned us to not bring any bear-attracting food with us — not even gum. And he urged us to be as quiet as possible in the towers. The bears know we’re there and will move on if disturbed by human sounds.

We were excited and too chatty when we saw our first grizzly bear, a young dark-brown female. Our steps echoed on the wooden floor. The skittish animal disappeared into the forest.

Lesson learned. Guides near other towers radioed bear positions to Timothy and Hackett and we moved to another viewing platform where we were able to watch another grizzly. We learned to identify the males by their long snouts. Females have rounder faces.

The bears fished and explored along logs, the beach and in the river, always one at a time, as if they were taking turns. When one bear ambled back into the forest holding a large, flopping salmon in its jaws, I was tempted to applaud. 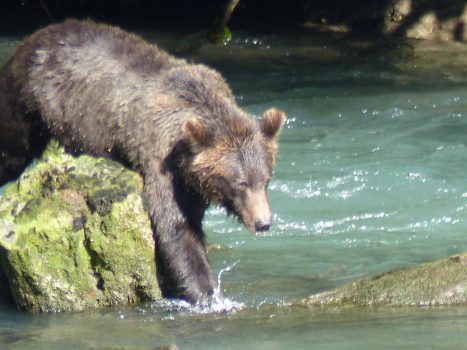 The next day was even better, including a massive animal Timothy estimated to be 350 kg and about 10 years old. Chestnut brown, with a long pale snout and a lighter-coloured arc of fur behind the muscular hump, the guides know this bear well and call it Snorkel.

It lazily scooped the newly dead or dying spawned salmon from the water, chewing and licking its snout. 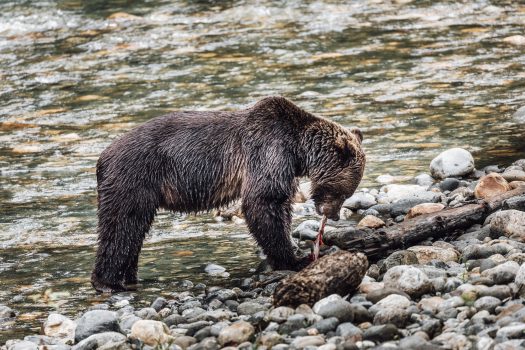 On this late-September day at the height of the salmon run, the river was packed with chum, also called dog salmon, their tails thrashing as the fish raced to spawn.

It’s a good time to be a grizzly bear. All of the bears abandoned half-eaten fish for the circling gulls. The shore and logs were covered in salmon carcasses.

“They only want the skin and the eggs if it’s a female salmon,” Timothy said. The fat-laden parts would help the grizzly prepare for hibernation.

The big male grizzly walked through the shallows, swinging its head side to side to hunt, often sticking its face in the water. It moved down river. Timothy motioned us to walk 15 metres to the next raised platform to follow along. He and Hackett, both carrying bear spray, were front and back of us as we slowly came down the stairs. “Crouch. Don’t look big,” Timothy whispered. He’d told us these animals are incredibly fast. Although the bears hadn’t paid us any attention, it was a bit tense until I climbed the stairs to the tower and the gate was shut behind us. 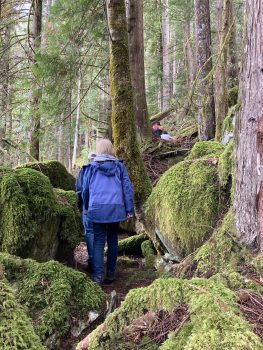 We shared stories and impressions of the day on the return boat ride to the lodge, arriving to see a mottled black seal sunning itself on the dock.

There are plans for the Klahoose Nation to use the resort for healing and retreats in the off season. A longhouse and a sawmill for fallen cedar trees are on the wish list.

This property was once known as the Homfray Lodge. Now it’s a Klahoose-owned business that brings employment and training opportunities to the Nation, along with giving visitors an Indigenous travel experience.

Hackett says she believes this kind of tourism, where visitors can learn and share Indigenous history and stories, can be an act of reconciliation.

“I think it’s absolutely amazing that we’re branching out like this,” said Whitmore of the resort’s ownership. “No one thought we can do this and here we are, reclaiming it.”

Linda Barnard’s trip was sponsored by Destination British Columbia, which did not preview this story. 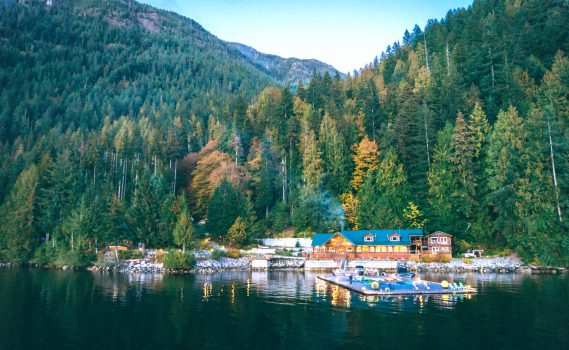 Klahoose Wilderness Resort is a boat-in, all-inclusive, off-grid eco-lodge with four rooms and three cabins. There is WiFi in the great room of the main lodge but not in rooms.

Boat transportation to and from Lund to the resort, as well as all meals and activities are included.

Optional tours such as guided fishing charters, heli-sightseeing, heli-hiking, heli-paddling or glacier walks are not included.

For more information go to klahooseresort.com